Overly sensitive students at college campuses everywhere have learned that if you protest a conservative speaker on your campus, you will be lauded by the media as “brave” and “patriotic.” That’s exactly what happened on Tuesday’s The View, when the panel finally got around to discussing Notre Dame’s graduation ceremony last weekend, where a large group of students walked out during Vice President Mike Pence’s commencement speech to his alma mater.

Commencement addresses from presidents and vice presidents are newsworthy, but what the networks choose to focus on differs wildly based upon whether the individual is liberal or conservative. Despite the controversy surrounding President Obama’s commencement speech at Notre Dame University in 2009, the nets focused heavily on the content of his remarks. Not so for Vice President Mike Pence, who delivered this year’s May 21, keynote. While ABC correspondent Amy Robach briefly mentioned the subject he discussed – the suppression of free speech on campus – the other networks focused solely on the dozens of students who walked out of the address in protest.

Who's Unsafe on Campus?

Springtime may be in bloom, but snowflakes never go out of season at America's most prestigious colleges and universities. Quivering students at the University of Notre Dame launched a protest last week against the school's decision to invite Vice President Mike Pence as commencement speaker.

MSNBC Warns: Notre Dame is the 'Next Hobby Lobby'

In a piece discussing the University of Notre Dame’s policy on contraception, Irin Carmon of MSNBC.com revealed her unashamed support of government-mandated birth control and abortifacient drugs. And if the headline “This is the Next Hobby Lobby” wasn’t clear enough, the article barely mentioned opposition to Notre Dame’s decision to fight the contraception mandate. Aside from a few brief paragraphs on the Sycamore Trust, a conservative pro-life alumni group, the piece was extremely sympathetic to the pro-choice cause and dismissive of those who oppose the contraception mandate.

The article cited one student who lamented that “you couldn’t find a box of condoms anywhere” on campus. Carmon, using one student as an example, claimed that the university has stigmatized contraception entirely: “Even students who use birth control pills for non-contraceptive purposes say they have been stigmatized.”

Amy Sullivan: Not Even the Vatican Cares About Obama's Notre Dame Speech

Dear religious pro-life Catholics, get over yourselves. Signed, Amy Sullivan.

Okay, I'm paraphrasing, but the Time magazine staffer practically expressed those sentiments in two April 30 Swampland blog posts wherein she suggests that even the pope wouldn't mind hanging out with Obama on stage at Notre Dame when he accepts his honorary doctorate later this month.

[Ed Henry's press conference] question is a misstatement of Obama's campaign pledge to the Planned Parenthood Action Fund that "the first thing I'd do as President is sign the Freedom of Choice Act." Of course, before Obama could sign the bill, Congress would have to first pass it. And he's never expressed the hope that Congress drop what it's doing and prioritize FOCA.

Less than an hour later, Sullivan sought to marginalize conservative Catholics who are disturbed by Notre Dame honoring the very pro-choice President Obama:

While most of the mainstream media yawned at news that former U.S. ambassador to the Vatican Mary Ann Glendon was refusing Notre Dame's Laetare award due to the university honoring pro-choice President Barack Obama, USA Today's Cathy Lynn Grossman sure hasn't.

The religion reporter/blogger found her own unique, passive-aggressive way to slam Glendon's stand on principle by suggesting she's a self-righteous hypocrite.

In her April 30 post, "Who's a good enough Catholic for Notre Dame's top honor?", Grossman delighted in excerpting a satirical open letter by Jesuit priest Rev. James Martin, who penned a blog post for America magazine making light of the university's pressing need to find a new person to honor with the coveted Laetare Award (emphasis mine): 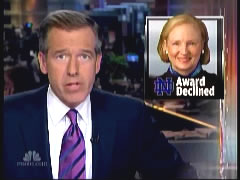 Monday's NBC Nightly News, unlike the ABC and CBS newscasts,  made time for a short item about how a Harvard law professor, scheduled to receive an award from Notre Dame the same day President Obama is to receive an honorary degree and deliver the commencement address, announced she will not attend because she disagrees with the Catholic university honoring someone who goes against the church's position on unborn life. The full item from anchor Brian Williams:

Major media began shielding Barack Obama from criticism early in the presidential primaries. It's no surprise, then, when they continue to do so today. However, the media's collective, instinctive tone-deafness in regard to grassroots activities continues to stun and amaze.

NewsBusters has so far noted several grassroots efforts that have been ignored – despite similar left-leaning efforts getting fantastic coverage. For example, there was Noel Sheppard's initial entry on the Chicago Tea Parties, and the tiny amount of coverage they received. Then, there was Warner Todd Huston, noting the San Francisco Chronicle's preferential treatment of an anti-Wall Street protest. For the magnum opus, however, we turn to the entire mainstream media's blind eye – pointed squarely at the University of Notre Dame.