The two were arguing through a commercial break, and Beckel apparently didn’t know they were back live when he made his indelicate remark (video follows with transcribed highlights and commentary):

Our MRC Gala and DisHonors Awards Recap (with Video)

You'd think the MSNBC "Hardball" host would be a shoo-in for the Media Research Center's annual "Obamagasm Award," but the 2011 prize went to Evan Thomas of Newsweek for declaring the president "stand[s] above the country, above — above the world. He’s sort of God."

The "Obamagasm award" was just one of a handful of DisHonors mockingly awarded journalists and Hollywood lefties Saturday night at the 2011 Media Research Center Gala and DisHonors Awards.

[For a lengthy excerpt of the Gala that includes Neal Boortz announcing the Obamagasm Award nominees, click play on the first embedded video below the page break]

Olbermann: ObamaCare Opponents 'Killing 45,000 People/Year,' 'Who Are the Terrorists?'

On the second day of a new feature on Keith Olbermann’s Countdown show, called "Quick Comments," the MSNBC host turned his attention to Neal Boortz -- whom he called a "hate radio host" and referred to as being "dehumanized" -- and others who oppose the implementation of ObamaCare, accusing them of "killing 45,000 people every year," and suggesting that those who seek to block universal health care are as bad as terrorists. As Olbermann cited a dubious study which claimed that 45,000 people die in America each year because they lack health insurance, the Countdown host charged:

What would you do, sir, if terrorists were killing 45,000 people every year in this country? Well, the current health care system, the insurance companies, and those who support them are doing just that. ... Those fighting health care reform – not those debating its shape or its nuance – people who demand the status quo, they are killing 45,000 Americans a year.

Olbermann concluded by comparing ObamaCare opponents to terrorists: "Because they die individually of disease and not disaster, Neil Boortz and those who ape him in office and out, approve their deaths, all 45,000 of them – a year – in America. Remind me again, who are the terrorists?"

CNN anchor Rick Sanchez actually complimented NewsBusters on Wednesday afternoon for monitoring his Newsroom program: "...[T]he NewsBusters website, which constantly monitors this show -- and we're glad that they do -- questioned my conversation -- criticized it with Neal Boortz. In particular, our suggestion that the GOP needs to remain adamantly anti-abortion, to try and keep the Southern vote" He later thanked the MRC’s blog for watching.

The short segment, which began 23 minutes into the 3 pm Eastern hour of the CNN program, examined "the critics and compliment" of his newscast, as the on-screen graphic put it. Sanchez mentioned how "once the show concludes, I start getting all these Google alerts about what's being written about us, and every day, people are writing after they watch our newscast. We're giving them plenty of material."

CNN’s Rick Sanchez: Does the GOP ‘Have to Be Anti-Abortion’? 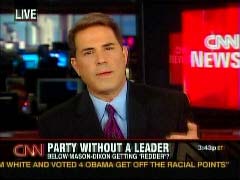 During a segment on Tuesday’s Newsroom program, CNN anchor Rick Sanchez asked South Carolina Governor Mark Sanford if the Republican needed to abandon its social conservative principles in order to be successful again:

"Do you have to be anti-abortion, because that's a very important, big topic in the South..?" Sanchez later asked the Republican governor, as well as talk show host Neal Boortz, "Can you be a fiscal Republican and a social conservative Republican at the same time without making one side mad..?"

Sanchez had both Sanford and Boortz on to discuss the upcoming Republican Governors’ Association meeting in Florida. The CNN anchor first brought up a recent New York Times article, with its accompanying exaggerated map, about conclusions that the Democratic Party might draw from the recent election: "You know, as you look at this map and you start to look at the South, there was some suggestion in that New York Times article, for example, that maybe Democrats are going to get from this that you know what, they can win in the future without the South."