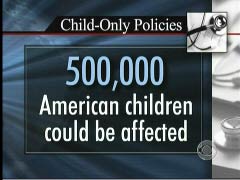 Catching up on an item from Wednesday, uniquely among the broadcast network evening newscasts, the CBS Evening News informed its viewers that ObamaCare regulations will result in some insurance companies refusing to sell new policies specifically for children whose parents otherwise might have wanted to purchase such policies. Faced with rules that would prevent the insurance industry from denying coverage to children with preexisting health problems, at least three companies will be discontinuing child-only policies. CBS anchor Katie Couric set up the report: "And it didn't take long. The insurance industry has already found a way around that preexisting condition provision for children's policies: Don't sell any. And that could affect a half a million Americans under the age of 18."

Correspondent Sharyl Attkisson recounted the story of a man who has had trouble purchasing insurance for his daughter because of a preexisting condition, and then informed viewers of the disappointing news that she still will likely not be able to obtain insurance. After noting President Barack Obama’s promise to ban discrimination against children with preexisting health problems, Attkisson continued: