The New York Times used a recent Hillary Clinton statement from an online chat to briefly, tentatively bring up an old issue, first uncovered by the Washington Free Beacon, that could resonate uncomfortably with her liberal feminist fans: Hillary's cavalier and casual attitude on how a case against one of her then-clients, an accused rapist, collapsed, and her questioning the credibility of the victim, a 12-year-old girl.

The headline over Tuesday's meager 300-word story by Amy Chozick (pictured) read "Clinton Defends Her Handling of a Rape Case in 1975." The placement of that weirdly specific date in the headline makes one wonder if the Times is hinting to readers that this is ancient history that no longer matters.

Matthews: America is the Book Palin Didn't Read! 'She Doesn’t Know Us!' 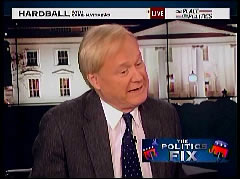 Chris Matthews, on Thursday's Hardball, trashed Sarah Palin, for all things, not quickly responding to a Glenn Beck question about who her favorite Founding Father was. After playing a clip of Palin telling Beck, initially, that she liked, "all of them," before settling on George Washington as her favorite Founding Father, the MSNBC host portrayed Palin as the dumb student:

Playboy writer Guy Cimbalo's attack on conservative women as the catalyst for his firing. However, though NewsBusters has still received no response to our repeated attempts to contact both Time Warner and AOL Politics Daily Chief Editor Melinda Henneberger, Henneberger has released this statement to Jason Linkins of The Huffington Post:

Does it make a lick of sense to you that I would fire anyone for standing up for women, or for taking on that disgusting story in Playboy? The bloggers for the old AOL site, Political Machine, weren't retained for the new site, Politics Daily, which has only been in existence for the last five weeks, and which we're just staffing up. Sorry so dull, but there's nothing more to it than that.

Tommy Christopher has posted a response at DailyDose.us strongly disputing Henneberger's claim that she supported his coverage of the Playboy story:

By Mark Finkelstein | March 15, 2008 8:55 AM EDT
How's this for a balanced Today panel to discuss the impact of Rev. Jeremiah Wright's extremism on Barack Obama: two liberals who agree it shouldn't hurt him, with one suggesting the situation might even help Obama?

The panel discussion was preceded by a segment narrated by Lee Cowan, the NBC correspondent covering the Obama campaign who has admitted "it's almost hard to remain objective" about Barack. Cowan buttressed his case in that regard. After playing the clip of Rev. Wright using the n-word to make an invidious comparison between Obama and Hillary, Cowan claimed the words were "old." True--if Cowan considers December, 2007, when Wright uttered them--ancient history.

Then it was on weekend co-anchor Amy Robach's interview of Michael Dyson and Melinda Hennenberger. Dyson, who as Robach noted is an Obama supporter, is a Georgetown professor and MSNBC political analyst. He has in the past garnered headlines for his fierce criticism of Bill Cosby, claiming among other things that Cosby "battered poor blacks" with his calls for self-reliance.