During his discussion with regulars Mark Shields and David Brooks on Friday's "News Hour" the subject of Blago arose, and Lehrer took what has to be considered an absurd position on this issue (video available here with relevant section at 6:00, partial transcript follows, h/t Mike Francesa via NB reader John F.):

Last week the McCain campaign released an ad charging Senator Obama with supporting sex education for kindergarten children when he was an Illinois state senator.

According to the Obama campaign and the media the legislation in question "was written to protect young children from sexual predators."

That's a line that Obama himself used during last year's CNN/YouTube debate:

I've got a 9-year-old daughter and a 6-year-old daughter.  And I want them to know if somebody is doing something wrong to them, encroaching on their privacy, that they should come talk to me or my wife.  And we've had that conversation, but not every parent is going to have that conversation with their child, and I think it's important that every child does, to make sure that they're not subject to the sexual predators (emphasis mine).

The only problem is that the goal of the bill wasn't to stop sexual predators, but to revamp the Illinois sex ed curriculum.

PBS's Shields Slams Palin for Choosing Ambition Over Her Daughter 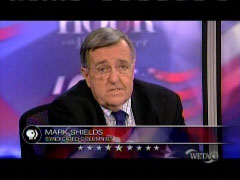 The gloves came off and the punching of Republican vice-presidential pick Sarah Palin began early in the night on PBS. Just after the Pledge of Allegiance, the analyst team of Mark Shields and David Brooks got into a squabble over Sarah Palin's pregnant daughter Bristol. Shields insisted a callous Gov.

Liberal attitudes emerged on the PBS convention set in the runup to Obama's acceptance speech on Thursday night. When right-leaning pundit David Brooks suggested after Al Gore's remarks that it was too bad Gore ruined his chance to be president in 2000 by listening too much to consultants, Mark Shields snippily suggested Gore really won: "Al Gore is a remarkable figure. I'm not sure why he blew his chance. He did get half a million more votes, of course, in a popular election than the man who eventually became president by the Supreme Court decision."

Is Barack Obama beginning to wear out his welcome with some of the mainstream media's old guard, or are the nation's more seasoned journalists just getting fed up with the obvious love affair most press members are having with the Democrat presidential nominee?

Before accusing me of drinking the Kool-Aid, consider that two of the country's most venerable and high-profile liberal pundits -- the Washington Post's David Broder and syndicated columnist Mark Shields -- turned on the junior senator from Illinois in a fashion that would have been unthinkable before Hillary Clinton dropped out of the race.

You better put down your drinks, and make sure there's nothing in your mouths, for the New York Times's David Brooks made a comment on Friday's News Hour that is guaranteed to evoke uncontrollable fits of laughter from those on the right side of the aisle.

*****Updates at end of post include similar opinions from conservative bloggers, as well as a video of a CNN correspondent saying roughly the same thing, and a response from the Kos Kidz.

Brooks was second up with this absolutely marvelous observation (final warning to put down your drinks, video available here):

“Overkill” from “right-wing radio,” in criticizing Senator Hillary Clinton, is her “secret weapon” that will “transform her into a figure of sympathy by a majority of people” -- and presumably help elect her President -- syndicated columnist and PBS NewsHour political analyst Mark Shields contended Friday night. On Inside Washington, a weekly panel show produced by ABC's Washington, DC affiliate which airs it on Sunday mornings after it first runs Friday night at 8:30pm on DC's PBS affiliate, WETA-TV channel 26, Shields argued:

“I think the secret weapon for Senator Clinton, if she is the Democratic nominee, is not simply Rudy's shortcomings, the perceived shortcomings of her opponent, I think you'll see on the part of right-wing radio -- conservative talk, however you want to call it -- such overkill that it will make her, transform her into a figure of sympathy by a majority of people.”

NPR's Nina Totenberg then chimed in: “That happened in her first Senate run.”