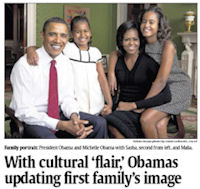 “President Obama may not have delivered on all the policy changes he promised since his election a year ago, but he and his family have brought dramatic social change to the nation's capital and to the country's collective image of its first family,” USA Today's Mimi Hall and Maria Puente gushed in a front page story on Tuesday marking a year since President Obama's election, “With cultural 'flair,' Obamas updating first family's image.” The two reporters began by describing Barack and Michelle Obama as just like any other hip couple:

He carries a smartphone on his hip, goes out for burgers and plays pickup hoops. She goes to their daughters' soccer games, works in the garden and loves listening to her iPod. Together, they host poets, artists and musicians at their house and invite neighborhood kids to drop by.

The journalistic duo soon featured this glowing assessment: “'The Obamas' White House is the most open for cultural and intellectual activities since the Kennedy administration,' says Douglas Brinkley, author and presidential historian at Rice University in Houston. 'It's not simply a matter of doing events of statecraft and cultural gravitas. They have a great flair for American pop culture.'”

'Fashion Icon' Michelle: 'She's Like Us -- On Our Really Best Day'

USA Today’s Maria Puente has proven herself to be a eager member of the Michelle Obama Fawn Club.

Washington Post media reporter Howard Kurtz found a story in USA Today that qualified for the "Obama Adulation Watch." Reporter Maria Puente oozed over incoming First Lady Michelle Obama on Friday as the black Jackie Kennedy, and insisted the Obamas undermined the conservative "caricature" of her "through widely viewed television interviews in which they demonstrated warmth, affection, humor -- and normality." It began:

You could call it "Obamalot."

That makes some sense. The incoming presidential couple, Barack and Michelle Obama, bear superficial similarities to John and Jacqueline Kennedy of the 1960s "Camelot" White House — charisma, vigor, her fondness for sheath dresses, for instance.