A UK Independent item about an unreleased book by historian Frank Dikötter made me think about New York Times columnist NIcholas Kristof. Readers will see why shortly.

Amazon says that Dikötter's "Mao's Great Famine: The History of China's Most Devastating Catastrophe, 1958-1962" will be released on September 28. The Independent's Arifa Akbar relays Dikötter's core conclusion that "At least 45 million people were worked, starved or beaten to death in China over these four years." This is a significantly higher number than the highest previous estimate of Jung Chang, who asserted in her 2005 book, "Mao: The Unknown Story," that "38 million people were starved and slave-driven to death in 1958-61." The seven million extra deaths would move Chang's 2005 total of "more than 70 million" into the neighborhood of 80 million, padding Mao's lead over Stalin and Hitler as the worst mass murderer in human history.

The Independent's Akbar also writes that "Mr. Dikötter is the only author to have delved into the Chinese archives since they were reopened four years ago." If true, this reflects a startling lack of curiosity.

I hope Nick Kristof is just a little curious, and will peruse what Mr. Dikötter has documented when it becomes available. Perhaps it will move him to reach conclusions a bit different from those he reached when he reviewed Chang's book in October 2005 (bolds are mine):

This won't surprise anyone who reads this blog regularly, but it needs to get on the record nonetheless: The airing of a June video showing interim White House Communications Director Anita Dunn praising Mao and Mother Teresa as "two of my favorite philosophers" to a group of high school students is barely news in the establishment press.

In an August 2008 report on the Obama campaign, Anne E. Kornblut of the Washington Post also described Dunn as "as senior adviser" who had joined the campaign "in the spring."

Roger Kimball at Pajamas Media has the video of Dunn's speech. NB's Jeff Poor (covering Glenn Beck's original broadcast that broke the story) and P.J. Gladnick (on Dunn's pathetic attempt to excuse herself) have previously dealt with Dunn's speech.

Here are the Mao-relevant portions of the speech excerpt:

The feud between the White House and the Fox News Channel took another, thanks to one of Glenn Beck's viewers.

On Beck's Oct. 15 program, the Fox News host played a video sent to him of White House Communications Director Anita Dunn, who had previously slammed Fox News and called it an organ of the Republican Party. In the video, Dunn reveals her two favorite political philosophers - humanitarian Mother Teresa and Mao Tse Tung, Chinese revolutionary and Communist leader responsible for an estimated 70 million deaths (video embedded below the fold).

"A lot of you have a great deal of ability," Dunn said. "A lot of you work hard. Put them together and that answers the ‘why not' question. There's usually not a good reason and then the third lesson and tip actually comes from two of my favorite political philosophers - Mao Tse Tung and Mother Teresa, not often coupled with each other but the two people that I turn to most to basically deliver a simple point, which is you're going to make choices. You're going to challenge. You're going to say why not. You're going to figure out how to do things that have never been done before, but here's the deal."

The Sayings Of Chairman Barack 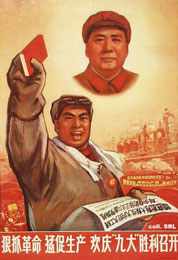 "Before the Speech: Short readings.  Notable quotes excerpted (and posted in large print on board) from President Obama's speeches about education.  What are our interpretations of these excerpts?  Based on these excerpts, what can we infer the President believes is important to be successful educationally?" -- from Dept. of Education, Grades 7-12 Menu of Classroom Activities: Pres. Obama's Address to Students Across America, Sept. 8, 2009 [emphasis added]

Great news.  Our leader will be addressing all schoolchildren on September 8th.  And the Department of Education has helpfully prepared a menu of activities for the day.  As you'll note above, 7-12th graders are to view quotations from Pres. Obama, discuss them, and strive to understand what "the president believes is important" for students to be successful in school.

Wonderful.  But why stop with students?  Shouldn't Americans of all ages have the benefit of the President's wisdom?  And why limit it to one day, and only to the topic of education?

Maybe it is because NBC has the broadcast rights for the Summer Olympics being held in China, but big gas-guzzling, greenhouse gas-emitting automobiles made by General Motors are seen as a plus for the communist nation's embrace of capitalism.

"What would Chairman Mao think?" CNBC correspondent Phil LeBeau asked. "Six decades after the Communist Revolution, China has become the hottest capitalist engine on earth. And ironically, some of the most revered symbols of success in today's China are Cadillac, Buick and Chevrolet."