Fang reported that in a speech at the Council for National Policy in February 2009, Bozell claimed by the time the national networks ran "a single story on Reverend Wright, 42 states and the District of Columbia had voted." Dear Mr. Fang: please identify the exaggeration in that fact.

The manufactured controversy over Chick-Fil-A won’t be dying down anytime soon, if media figures get their way.

Chick-Fil-A President Dan Cathy stated that he was “guilty as charged” when it came to supporting the traditional family, and commented on a radio show that “I think we are inviting God’s judgment on our nation when we shake our fist at him and say: You know, ‘We know better than you as to what constitutes a marriage.’”

That’s tantamount to heresy in  and in  and D.C. newsrooms. The media have proven themselves in the tank for same sex marriage, and Chick-Fil-A is learning what it means to cross them.

Just ask George Soros. The left-wing billionaire is helping fund two major conferences that start on the same day, in two different locations just a three hours apart by car. Two liberal events packed into one long weekend. God created the world in six days. Apparently, Soros, who sees himself as “some kind of god,”needs just a long weekend to start remaking today's world in his image.

The emphasis of both conferences is a familiar one to American voters – change. Soros wants to begin changing the global economy in one event. In the other, his flunkies want to “Change the world. Change the media.”

Now that is change you can believe in. Sadly, those who actually report the news must believe in it because they sure as heck aren’t reporting on Soros or either event. And that’s even though staffers or even executives from Reuters, the Financial Times, NPR, PBS, The Washington Post and other major media outlets are speaking at one event or the other.

The first gathering in Bretton Woods, N.H., is an economic conference Soros once described as “a grand bargain that rearranges the entire financial order.” In October 2009, Soros committed $50 million to the Institute for New Economic Thinking (INET). A week later, the glib lefty investor wrote a column calling for a new Bretton Woods event, to recreate the one that helped design the post-WWII economy. Only he wants this one to knock America down a peg or three.

Liberals' Accusations Against Koch Brothers Are Classic Examples of Projection

Earlier today, my Examiner colleague Mark Tapscott wrote on the left's tendency to create political bogeymen and then accuse them of just about everything under the sun. There's a bit more that needs to be added in the context of the left's newest bogeymen, the newly infamous Charles and David Koch. Just like they did previously in their attacks on the likes of Kenneth Starr and Richard Scaife, lefties are once again playing fast-and-loose with the facts regarding the Kochs.

Fortunately, lawyer John Hinderaker over at the Power Line blog has engaged in some industrial-strength deconstruction to debunk two hit-pieces against the Kochs and Wisconsin governor Scott Walker put out by Think Progress blogger Lee Fang. He goes through each piece point-by-point and demonstrates that when it comes to the Koch Industries and the environment (and everything else), there is no truth to the leftist smears. Both pieces (1 and 2) are must-reading.

Here's just a taste of the debunking (Fang quotes or summaries are in bold): 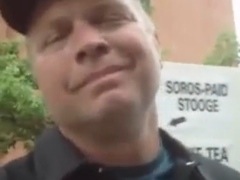 Liberal activists are so desperate to paint the Tea Party as racist that some, apparently, are willing to fabricate evidence and fallaciously draw unsupported conclusions to support their point.

Lee Fang, a writer for the far-left blog Think Progress, recently posted a video purporting to show racism at Tea Parties. But the video was a total fraud. It took statements out of context, claimed racism where there really was none, claimed liberal plants were authentic members of the movement, and even used video from 2006, three years before the movement existed!

Liberal writers at the Nation and the Huffington Post, as well as former Fox News cohost Alan Colmes all trumpeted the Think Progress video as evidence of Tea Party racism, despite the easily-verifiable evidence to the contrary.