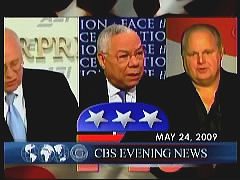 In the lead CBS Evening News story, Kimberly Dozier made Powell's case, reporting how on Sunday's Face the Nation “he said the criticism he faces points to what's wrong with his party” and “he pointed out the party's recent poor track record, losing the presidency by ten million votes and losing a majority in Congress.” Dozier had noted that Powell endorsed Barack Obama over John McCain last year, but failed to suggest any hypocrisy in then fretting about the Republican candidate, the most liberal since Gerald Ford, losing or then complaining the party is too conservative. Instead, Dozier proceeded to highlight how “moderate Republicans worry that the party is perceived as embracing only a few narrow issues -- anti-abortion, anti-tax and pro-gun rights.”

CBS Anchor on Pelosi: 'Is This Over?'; ABC Hails Obama's 'Masterstroke' on Huntsman 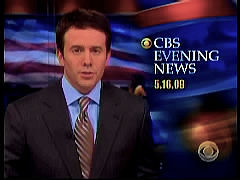 A night after the CBS Evening News ignored CIA Director Leon Panetta's rebuke of House Speaker Nancy Pelosi, Saturday's newscast continued the blackout as anchor Jeff Glor only mentioned Pelosi in setting up a question by explaining she “put herself in a very awkward position” when “she said the CIA lied to her or misled her about water-boarding,” before he asked Time magazine veteran John Dickerson: “Is this something that's over for the Speaker now or does this continue?”

Though the whole topic is apparently already over for CBS News, Dickerson maintained “it's not over for the Speaker” as he proceeded to empathize with her plight by suggesting she's “got to hope another issue...blows her off the front pages” and that “when Congress goes home for their recesses that somehow she gets out of the news cycle because she's still in a fix.” But not one that interests CBS News.

Nor NBC, which like ABC on Saturday night, didn't utter Pelosi's name – possibly because all three evening newscasts were so exited about what they made their lead stories: President Obama naming Utah's Republican Governor, Jon Huntsman, ambassador to China. “A political masterstroke” declared ABC's George Stephanopoulos on World News in repeating the same phrase applied moments earlier by reporter Jonathan Karl. Stephanopoulos even managed to get in a dig at conservatives as he hailed the pick as “one more sign that this is a party [Republican] where the reformers -- the moderates -- are looking for an exit.” 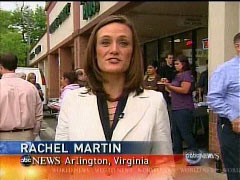 On ABC’s World News Saturday, and the same day’s CBS Evening News, correspondents suggested that conservative positions on social issues were responsible for the Republican party’s recent electoral misfortunes, as the two programs filed stories about an appearance in Arlington by Jeb Bush, Eric Cantor and Mitt Romney as part of an effort to rebuild the party’s appeal. ABC cited a recent ABC News / Washington Post poll showing only 21 percent of Americans identify themselves as Republicans, while CBS cited a Pew Research poll finding the number had dropped from 30 percent in 2004 to 23 percent currently.

After a soundbite of Jeb Bush explaining that Republicans needed to spend more time "listening," "learning," and "upgrading our message," ABC’s Rachel Martin contended that "That means moving hot-button social issues like abortion and gay marriage to the side, and shifting the focus to health care, education and the economy."

And, ignoring the fact that a substantial number of moderate House Democrats have taken conservative positions on issues like guns and abortion to win in their own conservative leaning districts, CBS’s Kimberly Dozier more directly charged that conservative positions on such issues by Republicans had hurt the party: "The trio notably avoided controversial touch stones like gun rights or abortion, which are blamed for driving away moderates and independents." Notably, 65 House Democrats recently sent a letter to Attorney General Eric Holder stating their opposition to a new assault weapons ban. 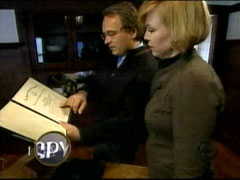 On CBS’s Sunday Morning, correspondent Kimberly Dozier interviewed former C.I.A. agent Robert Baer, who argued that Iran: "...is empire by proxy. You get people -- it's like Communism. You get people to go along with you and your vision of the world. And they're saying, you know, ‘we can finally drive the United States out of the Middle East.’" Dozier added: "Unless, Baer says, we give President Ahmadinejad and his religious backers what they want."

Baer explained what Iran wants: "First of all, they want to be recognized as a major power in the Gulf...By the United States, by the Europeans. They want to be deferred to on big issues like Iraq and Afghanistan, issues that directly affect them." Dozier asked: "But in a sense, wouldn't the U.S., wouldn't Europe be rewarding them for bad behavior?" Baer replied: "Well, we would be. But does it matter? We have to be pragmatic about this."

Dozier went on to explain: "If we don't negotiate, Baer worries, the United States may find itself in yet another war we can't afford to fight." Baer exclaimed: "And do we really want to take down the most powerful country in the Middle East? I mean, we've just taken down Iraq, the second most powerful country, and it hasn't done a bit of good for anybody in the region." Dozier interjected: "It's a mess." Baer agreed: "It's a mess and it's going to remain a mess. Let's talk them back into the game of nations."

On Saturday’s CBS Evening News, correspondent Kimberly Dozier filed a report profiling moderate Republican Senators Susan Collins and Olympia Snowe, both from Maine, in light of their vote in favor of President Obama's economic plan, and relayed their criticisms that other Republicans should show more willingness to "compromise." Dozier also likened Collins to another former Republican Senator from Maine, Margaret Chase Smith, who is known for being "the first Senator to stand up to McCarthyism." 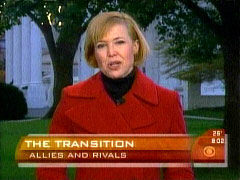 On the Saturday Early Show on CBS, President-elect Barack Obama’s Cabinet picks were presented positively as correspondent Kimberly Dozier referred to a "superstar Cabinet," and its members as "bold" and "inspired," while co-anchor Erica Hill called the Cabinet "star-studded." The terminology was similar to that employed by NBC's Andrea Mitchell on the previous night's Nightly News, as she referred to Obama's "all-star Cabinet."

During the 8:00 a.m. hour of the Saturday Early Show, as she filed a story regarding Obama’s choices of Hillary Clinton for Secretary of State and Timothy Geithner, also from the Clinton administration, for Treasury Secretary, Dozier introduced her report: "Well, Obama’s Cabinet picks are coming one by one, and they’re calling it, in some cases, a ‘superstar Cabinet.’" After informing viewers that Obama may ask Defense Secretary Robert Gates to stay on, Dozier repeated the "superstar" label as she passed on praise from former Reagan Chief of Staff Ken Duberstein. Dozier: "Ronald Reagan’s former chief of staff says Obama’s taking a page from his boss’s book, choosing a superstar team for their skills, not their political persuasion."

When This Week assembled a round-table of four liberals versus one conservative yesterday, I kvetched. Maybe I should have cheered. ABC's idea of balance looks good compared to that of CBS. This morning's Early Show preview of the Bush admin's plan, to be announced later today, to regulate the financial industry was essentially conservative-free. OK, to be absolutely accurate, there was a brief clip of Treasury Secretary Paulson saying the plan would protect the Fed's balance sheet and US taxpayers.

But in her set-up piece, CBS's Kimberly Dozier emphasized the negative: "critics say it's win-win for banks, not the consumer. Less regulation, but no new legal limits to stop questionable lending practices or to stop the shell-game financial structures that led to the current mortgage debacle." The only expert she aired was University of Maryland economist Peter Morici who griped that under the plan: "[banks] can still engage in sharp practices that got them in trouble. There's no reason to believe that this regulatory format will keep the kind of crisis we just had from happening again. Nor will it get us out of this recession."

Co-anchor Maggie Rodriguez took the baton from there. She first interviewed Sen. Chris Dodd (D-CT), who claimed Congress had already given the Fed "massive" regulatory authority. Dodd predictably blamed the current situation on "a failure of leadership." Then it was on to Rodriguez's in-studio chat with CBS News biz correspondent Anthony Mason who--surprise!-- was also a critic of the plan.