On Thursday's New Day, CNN's John Berman did his best to defend the Obama administration's secret shipment of $400 million to Iran right before the Islamist regime released four American prisoners. Former Rep. Mike Rogers criticized the payment, but Berman countered that "the President...said money was going there...We did not have the details about the plane...the euros — things like that." He later underlined, "Isn't the key to diplomacy...that everyone gets to declare victory?"

One could cite at least a half-dozen problems with Pace's story, but two of them were particularly disingenuous.

Kimberly Dozier of Daily Beast has an excellent piece today you might not see picked up by many in the Obama-puffing national media: "Special Ops to Obama: Let Us Fight ISIS, Already."

For well over two weeks, the Obama administration has been urging military action against the Assad regime in Syria for its use of chemical weapons.

At the Associated Press, in a "Fact Check" item at its "Big Story" site, Calvin Woodward told readers that "President Barack Obama voiced his conviction Tuesday night that Syrian President Bashar Assad was to blame for deadly chemical attacks against civilians, but again he offered no proof." Again? The AP reporter also questioned the number of civilian deaths involved. Excerpts follow the jump:

In a move which appears conveniently timed to coincide with a wave of other arguably more damaging bad news for the administration, the Associated Press has reported that the Department of Justice informed the wire service on Friday that it had secretly obtained two months of reporters' and editors' telephone records.

In the words of AP's Mark Sherman, in coverage late this afternoon, "the government seized the records for more than 20 separate telephone lines assigned to AP and its journalists in April and May of 2012." Sherman also notes that "more than 100 journalists work in the offices where phone records were targeted, on a wide array of stories about government and other matters," and that those records "were presumably obtained from phone companies earlier this year" (i.e., after Obama was safely re-elected). More from Sherman's report, a comment from yours truly, and several comments by others who have read AP's coverage follow the jump (bolds are mine):

A week ago, National Journal's Michael Hirsh quoted an unnamed State Department official who claimed that "The war on terror is over. Now that we have killed most of al Qaida, now that people have come to see legitimate means of expression, people who once might have gone into al Qaida see an opportunity for a legitimate Islamism." If it's so over, then why were government officials referenced in Kimberly Dozier's Associated Press report this evening about the state of Al Qaida a year after Osama Bin Laden's death "on condition of anonymity because they say publicly identifying themselves could make them a target of the terrorist group"?

Dozier is a noteworthy exception to the usually dreadful reporting at the wire service, and has a personal reason for having her eyes open. While she was with CBS News in May 2006, she was critically injured by an IED in Iraq. After nine months, she returned to work. According to Wikipedia she joined the AP in the spring of 2010. 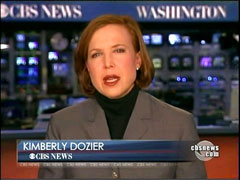 On the CBS Evening News on Saturday, correspondent Kimberly Dozier reported on a recent rise in homegrown Islamic extremism in the United States and explored the motivation behind it: “... terrorism experts agree militant Islam is becoming an American problem....the wars in Iraq and Afghanistan make potent recruiting tools. They’re portrayed by the militants as America’s war on Islam.”

Dozier went on to cite American bigotry as another cause: “Muslim community leaders here say young people are also being driven to extremes by post-9/11 anti-Muslim propaganda like this.” An obscure anti-Muslim video was played as she continued: “And rising incidents of genuine anti-Muslim discrimination. Civil rights complaints have jumped 10 percent in just the past year, according to the Council on American Islamic Relations.”

While using C.A.I.R. as a credible source, Dozier only briefly mentioned the organization’s radical ties: “There’s been tension between the FBI and the Council over alleged links to militant groups which it denies.” She then offered a dismissive statement from C.A.I.R.: “It says U.S. authorities should start using the Muslim community as a resource, not an adversary, to help it police its own.” 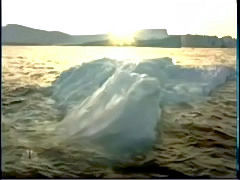 More than two weeks after ClimateGate broke, ABC's World News finally got around to mentioning it on Sunday evening, but not to explore how the e-mails discredited leading scientists who insist mankind is causing global warming as, instead, ABC declared “the science is solid” and NBC assured viewers “the evidence is overwhelming that man is behind climate change.”

ABC reporter Clayton Sandell merely included, in a larger story about the Copenhagen conference, how “global warming naysayers are claiming that e-mails stolen from” East Anglia University “show climate scientists discussing how to fudge results to promote the idea that humans are altering the planet.” After failing to inform viewers of any specifics the e-mails revealed, Sandell, who didn't utter a syllable about them on Sunday's Good Morning America, concluded his World News piece:

The science is solid, according to a vast majority of researchers, with hotter temperatures, melting glaciers, and rising sea level providing the proof.

Over on the NBC Nightly News, following a shoddy Friday night story, Anne Thompson checked in from Copenhagen with a story on “cautious optimism that a political agreement can be reached on reducing carbon dioxide emissions,” before she repeated the usual hysteria about how “the Greenland ice sheet...is melting at an ever faster pace.” Only at the very end did Thompson raise “this scandal called ClimateGate,” offering the most-benign explanation of how “essentially, in those e-mails, some climate scientists seem to be suggesting that perhaps they're massaging the data.” But, she countered in citing the UN's Yvo de Boer:

When you look at the overall science and the fact that science from around the world has been reviewed by scientists around the world -- 2,500 by the UN -- he says the evidence is overwhelming that man is behind climate change.

CBS on Saturday finally covered the growing ClimateGate scandal, but did so when its "Evening News" program was going to be preempted by college football in most of the country.

With the SEC Championship game between the universities of Florida and Alabama starting at 4PM EST, few would see CBS's report on this controversy unless they read an article at the network's website.

There, the video of the segment was available with the surprising caption "Climate Change a Hoax?"

According to LexisNexis, anchor Jeff Glor teased the story before a commercial break, "Just ahead on tonight`s CBS EVENING NEWS -- did some scientists fudge the numbers to make climate change look worse than it is."

After the break, Glor introduced correspondent Kimberly Dozier who offered a surprisingly detailed report on the scandal (video embedded below the fold with transcript): 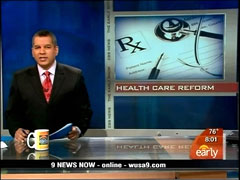 At the top of the 8:00AM ET hour of Wednesday’s Early Show, co-host Russ Mitchell cited protests at health care reform town hall meetings as evidence that the debate was "turning into a nasty national shouting match."

After playing a clip of a U.S. Chamber of Commerce ad opposing the health care plan, Mitchell observed: "Democratic lawmakers pushing reform are being jeered at testy town hall meetings. President Obama is urging Americans to ignore those who he says are trying to scare and mislead."

At the top of the show, co-host Harry Smith declared: "As President Obama takes his health care reform plan to the people, anger spills out all over the country." Smith later introduced a segment on President Obama’s Tuesday town hall: "First though, tempers boiled over again Tuesday in the heated debate over health care, nearly everywhere that is, except inside President Obama’s town hall meeting in New Hampshire."

Reporting on Sonia Sotomayor’s confirmation to the Supreme Court on Saturday’s CBS Evening News, correspondent Wyatt Andrews declared: "...she’s not always the reserved, work-aholic judge she portrayed in the Senate hearings....The judge is also known for her can't-miss Christmas parties, which included salsa dancing inside the federal court of appeals in Manhattan." [Audio/video (1:25): Mp3 | WMV]

Andrews offered a detailed report on Sotomayor’s down-to-earth personality as he spoke with her friends and colleagues: "...according to friends, like former law clerk Allison Barkoff, the Judge has a big, engaging, New York personality." Barkoff exclaimed: "She is fun. She – she works hard and she plays hard." No mention was made in the segment of Sotomayor’s infamous "wise Latina" comments.

As an example of how the newest member of the Supreme Court "plays hard" Andrews described: "Melissa Murray clerked for two federal judges, including Sotomayor, and when both judges came to Melissa’s wedding, Sotomayor challenged the other judge to a dance-off." After describing Sotomayor’s "can’t-miss" Christmas party, Andrews added: "Sotomayor knew and invited everyone in the courthouse." Barkoff explained: "The people who work in the cafeteria, the security guards, the custodians, are equally as important as her colleagues."