President Trump was renowned for his prolific and infamous use of Twitter to both aid his message and to stir up controversy. But during Tuesday’s The Lead on CNN, host Jake Tapper tried to link someone else’s Instagram controversy to the President. The controversy was sparked by Louise Linton, the wife of Treasury Secretary Steve Mnuchin, who got into a heated exchange over a comment left on an Instagram photo.

On Thursday's Situation Room, CNN's Scottie Nell Hughes claimed that Ted Cruz's controversial speech at the Republican National Convention "killed conservatism" or "severely damaged it, at the very least." The Trump supporter outlined that "those that were...sort of, in the Cruz movement" caused an "embarrassment;" and that supposedly, Cruz "not only ended his career, but...ended the Tea Party...[and] everything that he represented" with his speech. Amanda Carpenter and Kevin Madden pushed back against her claim.

In CNN’s post-debate coverage early Thursday of their 2016 Republican debate, CNN political commentator Michael Smerconish praised Carly Fiorina as possessing “a public speaking gift,” but lamented that she didn’t smile enough during the debate and should “loosen it up a little bit.”

On Thursday's New Day, CNN's Chris Cuomo wondered if some in the 2016 Republican presidential field might be making the possible redeployment of U.S. troops into Iraq a political issue. When GOP strategist Kevin Madden underlined that "so many Republicans disagree with the President's [Obama's] approach on combating ISIS that so many of these candidates are going to want to draw as stark a contrast as possible," Cuomo replied, "You playing politics, though – with the troops, though?"

VIDEO Chuck Todd: Will GOP Overreact on Hillary E-Mails, Cause People to ‘Sympathize With’ Her?

On Sunday’s Meet the Press, moderator Chuck Todd took time out of the ongoing controversy surrounding Hillary Clinton’s e-mails to bring up the usual mock media concern, whether or not the GOP will overreact in their handling of the situation: “Do you fear, as somebody who would like to see the Republicans win the White House, do you fear that congressional Republicans could get in the way and actually make her look – sympathize with?”

CNN: the home for hate-filled rants against conservatives. On the July 16 edition of New Day, a panel reacted to Jake Tapper’s testy interview with former Vice President Dick Cheney. Democratic strategist and CNN contributor Paul Begala became unhinged, resorting to personal attacks on Cheney in response to his explanations of the Iraq war.

Asked by host Kate Bolduan as to why Cheney is speaking out right now – as if the chaos in Iraq didn’t make that self-evident – Begala snapped: “Well, either he's a secret plant from my party, reminding people of an administration that they hated. When he left office Dick Cheney's favorable was 13 percent. There are forms of venereal disease that are higher in the polls than 13%.” [MP3 audio here; video below]

CNN's Chris Cuomo forwarded a liberal talking point about the infighting inside the Republican Party on Tuesday's New Day, as he covered the primary elections in several states that day. Cuomo asked Republican strategist Kevin Madden, "Are you worried that these challenges are pushing your mainstream or establishment or traditional candidates farther to the right than they might be may like?"

The anchor could very well have gotten his talking point from colleague Van Jones, as the left-wing Crossfire host made the same argument just over two hours later during a panel discussion with Republican Ana Navarro: [MP3 audio available here; video below the jump]

For Obama, NPR is turning into the Happy Talk Network. First, there was the stunning headline “Healthcare.gov Could Have Been Worse.” On Thursday’s Morning Edition, the headline was “Why Obama Shouldn’t Worry About Lousy Poll Numbers.”

NPr headlines in the Bush years were in a different spirit, such as this beaut: “Naomi Wolf Likens Bush to Hitler.” The happy talker on this forget-lousy-polls story was NPR’s Ari Shapiro, who just left the Obama White House beat:

CBS's Erica Hill strongly hinted on Monday's Early Show that Sarah Palin's "extended flirtation...with running" for president and speaking only to Fox News to the detriment of the rest of the media would sour her with the voters. Hill asked former Mitt Romney aide Kevin Madden, "Does any of this risk though rubbing voters the wrong way?"

The anchor brought on Madden and former Clinton spokesman Joe Lockhart to discuss the former Alaska governor and the rest of the possible and actual 2012 presidential field for the Republican Party. After the Republican strategist agreed to a large extent with Hill in his answer to this question, she turned to Lockhart for his left-of-center view: "From a Democratic standpoint, if Sarah Palin jumped into the race, how do you think that would work out for President Obama?"

CBS's Smith: How Can Government 'Unleash the Economy And Not Spend Any Money'?

On Thursday's CBS Early Show, co-host Harry Smith saw Republican goals to limit government spending as antithetical to improving the economy: "How do you unleash the economy and not spend any money, oh, by the way, because that's the other mandate, is don't increase the deficit and don't – don't – 'I don't want one more cent of tax on me.'"

Smith put the question to Time magazine Washington deputy bureau chief Michael Crowley, who was equally skeptical: "I think it may be impossible, frankly. What Democrats would like to do is they would say you actually have to spend more money, have the government put money into the economy to get it moving again." He warned against conservative policies: "Republicans say we're spending too much, maybe cut taxes, but tax cuts aren't free, either, tax cuts increase the deficit. Maybe you could loosen regulations but you saw what happened on Wall Street when things were deregulated. It's really not as simple at this point as doing any of those things without taking a big risk that comes along with it." 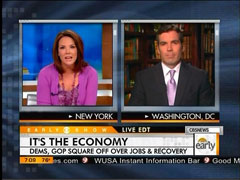 During a discussion of the upcoming midterm elections on Monday's CBS Early Show, co-host Erica Hill asked Republican strategist Kevin Madden: "...when you look at this from the Republican perspective...there is some competition from the Tea Party, from those perhaps to the extreme right...is this race Republicans to lose, and if so, what do they have to do to hold on to it?"

Hill picked up the "extreme right" label from her other guest, Democratic strategist Tanya Acker, who had just ranted: "I think that it's very evident that we're running against a group of Republican candidates, in large part, who've really positioned themselves at an extreme end of the right – of the right wing, which is really where not most of the country is....what Democrats have to do is talk about what it is they're standing for and why it is the country doesn't want to go back to a time when, frankly, a lot of us were much worse off."

Madden responded to Hill by pointing to the left-wing agenda of the Democrats: "...independent voters...they've abandoned Democrats, in large part because of the spending, because of the deficits, because of a very left of center agenda....it is a very good place to be right now when you're the alternative to a Democrat agenda."

Instead of challenging Acker on the Democrats "very left of center agenda," Hill gently wondered: "What about the President? He's doing a lot of fundraising, does he need to, though, work on a little bit different message or is he doing the right thing?" Acker reasserted her previous point: "...the real competition here is for the moderates, is for independents. And in order for Democrats to successfully get them back on board, they're going to have to explain why the alternatives are far too extreme."

And so goes CNN's Roland Martin. On the network's March 21 special coverage of the House of Representatives passage of health care legislation, host Wolf Blitzer asked Martin, a CNN political analyst, about his views of those who call these so-called reform measures Soviet-style communism or socialism.

"That's just stuck on stupid," Martin said. "I mean to sit there on the House floor and all of a sudden you're talking about, oh, this is communism and you're sitting here and reaching - that's just dumb, OK? You know what? If Republicans truly cared about health care, why in the world didn't they do anything for eight years? So don't stand here now when the Democrats have been pushing the issue and now say, oh, no, ‘Republicans - we really care about health care,' when you had the opportunity to make changes to our system."