On Tuesday, journalists on all three network morning shows joined liberal celebrities in rushing to defend Prince Harry and Meghan Markle against accusations of hypocrisy after the supposedly environmentally-conscious royal couple took two different trips on private jets within a week. Reporters on CBS, NBC, and ABC touted other wealthy elites like Elton John and Ellen DeGeneres scolding critics for daring to question the royals’ controversial travel habits.

On Friday evening, the NBC Nightly News caught up with CNN in highlighting a couple of teenage environmental activists who are promoting an alarmist agenda against global warming while encouraging students to skip school to pressure adults into taking action on the issue. The CBS Evening News also gave the protests a 17-second brief.

By and large, the news media remained calm, collected, and hesitant to speculate on Tuesday night following the terrorist attack in Manchester, England at the Ariana Grande concert. That being said, the evening was not without notable comments, including some from MSNBC’s All In host Chris Hayes.

Secretary of State John Kerry took to the podium Wednesday and unloaded on Israeli Prime Minister Benjamin Netanyahu and the State of Israel, claiming they were impeding the Middle East peace process. Later on that evening, NBC Nightly News went to bat for Kerry running two reports backing up his assertions. “Kerry painting a dire picture when it comes to reaching a peace deal in the Middle East,” announced fill-in anchor Tamron Hall.

On Thursday, CBS and NBC's evening newscasts played up the "controversy exploding around the world over so-called burkinis," after several French city governments banned the Islamic swimming garment. CBS's James Brown previewed the subject by trumpeting, "Nuns go to the beach in their habits; so why has France banned the burkini?" NBC's Kelly Cobiella spotlighted protests against the ban, and gave a slanted description of the burkini: "A bikini that's more like a burqa, covering almost everything, and designed to give Muslim women more freedom."

While both NBC’s Today and CBS This Morning devoted full reports to The Wall Street Journal exposing the Obama administration secretly paying a $400 million ransom in cash to Iran to secure the release of American hostages, ABC’s Good Morning America only managed two news briefs on the topic that amounted to less than a minute of air time.

ABC's "World News" on Sunday caught up to CBS and NBC in fretting about the potential problems caused by illegal immigrants who may be leaving Arizona before the state's new law takes effect on Thursday. Correspondent Barbara Pinto devoted her entire piece to lamenting the possible damage to small businesses whose customers are presumably now leaving the state, but offered less than a sentence to the idea that illegal immigrants are already an expensive burden on state social services.

"The loud and bitter battle over Arizona's immigration law has reached fever-pitch," claimed Pinto. "But Rosario Peralta worries about the quiet exodus – immigrant families already leaving the state in droves. In the past few months, she's seen business and customers at her family grocery store disappear."

When political scientists compare populism and elitism, they could certainly find a test case in the new Arizona law on immigration enforcement. While Rasmussen found 70 percent of Arizonans favored the crackdown on illegal aliens, and new national media polls found majority support as well, ABC, CBS, and NBC denounced the popular will as short-sighted and discriminatory.

From April 23 to May 3, the top three television networks offered viewers 50 stories and interview segments on their morning and evening news programs. The tone was strongly hostile to the law and promotional to the "growing storm" of left-wing protesters: 37 stories (or 74 percent) were negative, 10 were neutral, and only three were positive toward the Arizona law's passage -- 12 negative stories for every one that leaned positive. Stories were much kinder and sympathetic to illegal aliens than they were to police officers. Cops were potential abusers of power. Entering the country illegally was not an abuse of power. It was portrayed as an honorable step by the powerless.

The soundbite count was also slanted, with 92 quotes against the law and only 52 in favor. The pro-law numbers, however, included many soundbites of Arizona public officials defending themselves against liberal charges that they were racists or in favor of racial profiling.

CBS Frets Illegal Aliens 'No Longer Feel Welcome' – and the Problem Is? 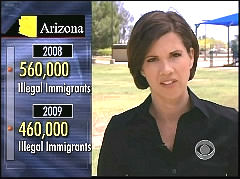 Most support Arizona’s impending immigration enforcement law and a solid 78 percent think the federal government should do more to keep illegal immigrants from getting into the U.S. where, Katie Couric noted in citing the new poll numbers, “hundreds of thousands of them now live in Arizona.” So, how did CBS take these hardly surprising findings? Couric fretted “many” of those illegals “no longer feel welcome.”

Instead of seeing that as good news which will lessen the problem, CBS empathized with the plight of a reproductively profligate law-breaker. “On a dusty block in Phoenix, 15 years of the Quintana family's possessions are for sale,” reporter Kelly Cobiella despaired over video of teddy bears before translating for the mother, Manuela, who managed to churn out ten kids who are now U.S. citizens, but hasn’t bothered to learn English. Cobiella explained how she decided to leave Arizona (for Colorado) because of the new law which has yet to go into effect.

Cobiella cited how over the past two years about 100,000 illegals have left Arizona and after sharing the complaint of a landlord who has lost tenants, Cobiella raised the sympathy quotient, relating how the 12-year-old daughter’s “best friend left to California with her family on Saturday,” asking the crying tween: “Did you get to see her yesterday before she left?”

In a report on Thursday’s CBS Evening News on the Republican Governors Association conference, correspondent Kelly Cobiella focused on Alaska Governor Sarah Palin, observing: "A lot of Americans would like to see her stay on the national stage -- 45 percent, according a new Gallup Poll. But even more, 52, percent, would not." Cobiella then added: "The party itself is split on whether to embrace Palin-style conservatism or broaden its appeal." A clip of Politico’s Jonathan Martin was featured: "You talk to a lot of these governors and they're very candid about it. This cannot be a white rural male party. And if it is, it's going to die."

Cobiella began the report by describing Palin’s attendance at the conference this way: "Alaska Governor Sarah Palin blew into Miami like a hurricane." In reference to Palin’s address to the organization, Cobiella remarked: "But when it came time to lay out her vision of the party's future, her role in it, her speech was heavy on the past." Cobiella also critiqued Palin’s press conference: "She also gave her first formal press conference since joining the Republican ticket. It was four questions long." After suggesting Palin’s press conference was too short, Cobiella described the Governor’s recent media blitz as simply: "firing back at critics, including unnamed aides to Senator John McCain, who said she spent too much money on clothes and wasn't prepared for the job."

A night after Sunday's CBS Evening News ended with a feature piece on a 106-year-old nun in Rome who plans to vote for Barack Obama, Monday's newscast concluded with a puff piece on “The Great Schlep,” a Columbus Day weekend effort headlined by left-wing comedian Sarah Silverman to get Jewish grandchildren to travel to Florida to convince their grandparents to vote for Barack Obama. In a video clip from the group's Web site which CBS played, Silverman, star of the Sarah Silverman Show on Comedy Central, pleaded: “If you knew that visiting your grandparents could change the world, would you do it? Of course you would,” so “schlep over to Florida and convince your grandparents to vote Obama.”

Anchor Katie Couric's introduction offered no hint to how the effort was on behalf of one specific candidate:

Senior citizens are a key voting block. In Florida, for instance, more than 7.5 million people voted in the last presidential election, and nearly one in five was 65 or older. Many of them, of course, are grandparents, a lot of them Jewish. So how do you win their votes this time around? Call in the grandkids, it's time for the Great Schlep.

The April 23 "CBS Evening News" found a way to twist the turmoil in the housing markets into something that's stretch even for them - a rise in the homeless population.

"The Anticos are leaving their Bradenton, Fla. home because they have to," CBS correspondent Kelly Cobiella said. "The bank foreclosed on it in February after Sharon lost her job and fell behind on the mortgage. For the first time in her life, she and her kids are homeless."

The true culprit behind the Antico's loss wasn't a bad mortgage or lost home value; it wasn't an adjusted rate that put the payment out of reach. It was that Sharon Antico lost her job and the family could no longer afford the mortgage.