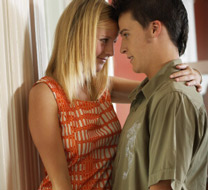 In 1991 a similar survey found that approximately 40 percent of young adults considered oral sex as "sex," Stacy noted. Researchers attribute the shift in sex-conceptualization to the Monica Lewinsky affair.

"Researchers point to former President Clinton's infamous statement, ‘I did not have sexual relations with that woman,' as the pivotal turning point in society's changing views about oral sex," Stacy said. "The attitude shift has been dubbed the ‘Clinton-Lewinsky' effect."