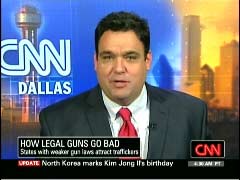 CNN's Ed Lavandera highlighted what gun control activists call the "iron pipeline" during a report on Tuesday's American Morning, where guns are obtained illegally through straw purchases, a felony offense under federal law, and smuggled to criminals who cannot legally purchase them. Lavandera never made it clear that such straw purchases are illegal during his report.

Anchor John Roberts introduced the CNN correspondent's report, which is part of a series titled "The Gun Trail." Roberts explicitly referenced the "iron pipeline," where guns obtained through illegal straw purchases in the Southeast are smuggled up the I-95 corridor to criminals in the Northeast: "Today, our Ed Lavandera is on the front line, a state at the start of the so-called 'iron pipeline'- a pipeline that could end on your street."