On Sunday's MSNBC Live, NPR legal affairs correspondent Nina Totenberg again showed her blatant double standard in being quick to label conservative justices as "very conservative" but painting liberal justices as being more "centrist." Appearing as a guest on Sunday's MSNBC Live, Totenberg claimed that three of the current U.S. Supreme Court justices are "very hardcore people," "hard core to the right." She also claimed that Chief Justice John Roberts was viewed as "very, very conservative" until he was "savaged by the far right" over his ObamaCare vote. 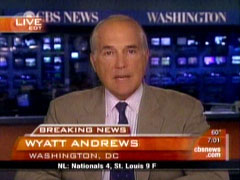 Andrews went on declare that: "Obama specifically promised to appoint justices who are pro-abortion rights." A clip of Obama on the campaign trail was played: "That's why I am committed to appointing judges who understand how our laws operate in our daily lives, judges who will uphold the core values of our Constitution, that's why I won't back down when it comes to defending the freedom of women." Andrews concluded: "In the search for his replacement, the President will face significant pressure, not just to name a liberal justice, but also to appoint a woman justice." UPDATES at end of post include previews of possible replacements.

The Associated Press is reporting that Supreme Court Justice David Souter will soon announce his retirement.

Given the Court's current makeup, do you see this having any impact on its present slightly right tilt?

Also, given how George W. Bush's judicial nominees were hassled and delayed in his two terms, will the Republicans behave like the obstructionist Democrats during the upcoming appointment proceedings, or roll over and give Barack Obama everything he wants?