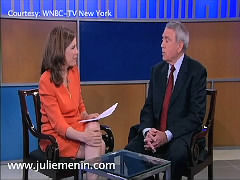 Dan Rather just won’t go away nor update his obstinate refusal to acknowledge liberal media bias. Confronted with MSNBC host Mika Brzezinski’s observation that the mainstream media lack “balance” and convey “a liberal world view” (earlier NB item), Rather rejected the premise and offered up a banal defense: “What is the definition of liberal? I myself favor strong military, tight money, and clean water.” That’s the very same obfuscating silliness he put forward as an argument as far back as 1999 in an appearance on CNN’s Crossfire.

In an interview for Julie Menin’s Give and Take program for WNBC-TV’s “New York Nonstop” digital channel, which will run this weekend and which TVNewser.com posted Tuesday night to highlight Rather’s take on a CNN-CBS News merger, Rather, making a parody of himself, declared his 2004 discredited hit piece of George W. Bush was “true” and insisted “I'm independent, fiercely independent,” maintaining:

I'm independent, I'm going to play no favorites, pull no punches. When I go down the street and knock out windows on one side, I'll knock them out on the other side. I think my record shows that.

By Mike Sargent | January 19, 2010 5:17 PM EST
TVNewser has a transcript par excellence, for your reading pleasure.  In sum, Mika Brzezinski has gone off the Big Media reservation again, in a good way. Let’s just say she unwittingly (?) offers praise for a cable news network with much better ratings.

In an interview for her new book, Brzezinski spoke with Julie Menin about the partisan nature of today’s American media:

BRZEZINSKI: "I've worked in the mainstream media for all the networks and I will say what people aren't saying. It's got a liberal world view. There are great people working at the networks, and they're mostly Democrats, ok? They try really hard to be objective, really hard and they do a great job at it, but the balance is not there within the objective mainstream media. It's not, it is not and I'm not sure how we fix that. I hate the polarizing extremes that we're seeing on cable where there's these sort of ‘Think my way or you’re evil’ kind of subliminal message or cartoonish type characters on the right and the left.

Interesting enough – but even more piquing is Brzezinski’s solution to the problem of a partisan media: