“A More or Less Perfect Union” is a three-part series, produced by Free to Choose Network, that will air on various PBS stations across the nation starting in February. The documentary is a personal exploration of the U.S. Constitution by Justice Douglas Ginsburg, who served on the U.S. Court of Appeals D.C. Circuit and is now a senior justice on the court.

Observers on the right and left have, for different reasons, long lamented that Comedy Central has become the main source of news for young people. But one group thinks the phenomenon is just fine. The academic left considers comedian Stephen Colbert an object of serious and perhaps even obsessive study.

The Washington Post’s Paul Farhi wrote an excellent piece on July 9, examining the academic world’s “unsettling” obsession with comedian Stephen Colbert. Farhi describes Colbert-related studies as the “academic cult of Colbert,” writing: “Yet ever since Colbert’s show, “The Colbert Report,” began airing on Comedy Central in 2005, these ivory tower eggheads have been devoting themselves to studying all things Colbertian.”

Time Magazine on George Washington: Tea Party, Modern Conservatism 'A Repudiation of All He Stood For'

George Washington just got a promotion. Yes, he's still one of the slave-owning oligarchs who, according to liberals, stuck us with a short-sighted Constitution, and whose colleagues were probably having sex with slaves.

But with the 2012 election on the line and conservatives citing the Founders' legacy as a touch-stone of limited government, Time Magazine has found it useful to turn the first president into a proto-liberal. 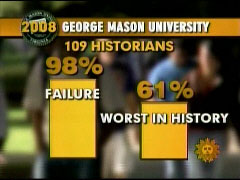 On CBS’s Sunday Morning, correspondent Thalia Assuras examined President Bush’s historical legacy: "On January 20th, 2001, George Walker Bush took the oath of office as the 43rd president of the United States. His presidency and the future, a blank slate...Before the Iraq war. Before Katrina swept ashore. Before the worst economic crisis since the Great Depression."

Assuras cited two historians in her report, both of whom labeled Bush one of the nation’s worst presidents. She first turned to historian Douglas Brinkley, who declared: "I think it's safe to say that President Bush is going to be seen as the very bottom-rung of American presidents...As a judicial historian looking at what's occurred on his watch, it is almost void of genuine accomplishment." The other historian Assuras included in her report was Joseph Ellis, who said of Bush: "I think that George Bush might very well be the worst president in American history...He's unusual. Most two-term presidents have a mixed record...Bush has nothing on the positive side, virtually nothing."

Following these Bush-bashing historical assessments, Assuras exclaimed: "And that's not a minority opinion. In a 2006 Siena College survey of 744 history professors, 82 percent rated President Bush below average or a failure. Last April, in an informal poll by George Mason University of 109 historians, Mr. Bush fared even worse; 98 percent considered him a failed president. Sixty-one percent judged him, as Ellis does, one of the worst in American history."