On Tuesday night, during a discussion after President Donald Trump's State of the Union speech, liberal CNN contributor Van Jones insisted that illegal immigrants are less likely to commit crimes than the general population as right-leaning CNN contributor Rick Santorum cited a recent study by John Lott finding that illegal immigrants in Arizona commit crimes at twice the rate of the general population.

Just one day after Fed Up, the 2014 documentary on obesity and the food industry produced and narrated by Yahoo! Global News Anchor Katie Couric was criticized for “deceptive editing,” the Weinstein Company – which is the film's distributor –  called for two interviews to be taken down from the YouTube website where the movie is available for viewing.

According to an article by Stephen Gutowski of the Washington Free Beacon website, Yahoo lists the “takedown” request as “manually detected” even though the news site “initiated a counter-notification requesting that the videos be reinstated on fair use grounds since the videos are the subject of a news report.”

On Thursday, the CBS Evening News seized on the deadly shooting of two local news reporters in Roanoke, Virginia to promote the idea that gun control should be treated like “a public health issue” akin to seat belts, airbags, and anti-smoking campaigns. In a tease early on in the program, fill-in anchor Maurice DuBois explained that “[s]ome public health officials say gun violence, just like car accidents and smoking-related illnesses can be prevented or at least reduced.”

You can tell the conservatives liberals fear most because they start being automatically referred to as "discredited." Ask Sen. Ted Cruz. But no one is called "discredited" by liberals more often than the inestimable economist John Lott, author of the groundbreaking book "More Guns, Less Crime."

CNN's Piers Morgan bullied gun rights advocate John Lott on his Wednesday night show, repeatedly interrupting him and lecturing him. At one point Morgan told his guest, "I'm going to keep talking, so I suggest you keep quiet."

This is typical Morgan behavior towards gun rights advocates, as he sets up a "debate" but proceeds to badger his guest as much as possible. An exasperated Lott asked "Why am I on?" at one point, and again shot back at Morgan, "You want to go and talk 90 percent of the time."

O'Brien sidestepped his facts and condescended to his position from the beginning. "How does that possibly make sense to you?" was her first question to him. She claimed the "rational" conclusion is a ban on high-powered assault weapons.

Friday's horrible massacre at a Connecticut elementary school has predictably fired up the left in this country to call for tighter gun restrictions as they blame the event on pro-Second Amendment advocates.

Possibly the worst example of this came Friday evening on CNN's Piers Morgan Tonight when Democratic New York Congressman Jerrold Nadler disgracefully said, "We have a lobby, the leadership of the NRA, who function as enablers of mass murder. And that's what they are. They're enablers of mass murder" (video follows with transcript and commentary):

As he hosted a debate on Piers Morgan Tonight on Monday,  CNN's Piers Morgan repeatedly cut off conservative guest John Lott as the former University of Chicago professor tried to argue against imposing additional gun control.

At one point, as he grew impatient with Lott trying to explain that the overwhelming majority of guns - 86 percent - are "semi-automatic," and that an "assault weapon" is not as unusual a weapon as it might sound, Morgan lost control and started ranting: 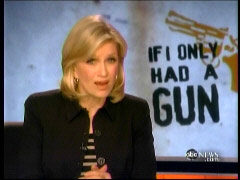 On Friday’s World News with Charles Gibson on ABC, substitute anchor Diane Sawyer previewed the same night’s special on guns in America, "If I Only Had a Gun," and, on World News, ran a report focusing on how challenging it is to react to a gunman when taken by surprise, even if one is armed. ABC News enlisted the services of police officers to train college students in firearm use and then had the students react to one of the officers as he pretended to be a crazed gunman and burst into a small lecture room. Sawyer informed viewers: "Our training is already more than almost half the states in the country require to carry a concealed weapon."

The report documented that all of the trained students performed poorly in trying to defend themselves. Sawyer narrated a clip of one such botched attempt at self-defense: "Joey struggles to get his gun out, but it's stuck in his shirt. He can't even get it out to aim it. Had this event been real, police say Joey would have been killed in the first five seconds." Each of the students taking part appeared to be wearing a T-shirt which the concealed handgun was tucked underneath.

But the report only focused on this one narrow scenario in which the law-abiding citizen is taken by surprise by a skilled gunman, while the report ignores other scenarios and crime situations when the record shows that armed citizens do sometimes succeed when forced to confront criminals.

In the May 31, 1999, National Review article, "Why New Gun Laws Won’t Work," University of Chicago Professor John Lott, author of More Guns, Less Crime, wrote about two then-recent school shooting sprees that were cut short when an armed citizen in each case used his own weapon to capture the gunman. Lott:

Are Women Responsible For Growth in Goverment?

Women's suffrage also explains much of the federal government's
growth from the 1920s to the 1960s. In the 45 years after the
adoption of suffrage, as women's voting rates gradually increased
until finally reaching the same level as men's, the size of state and
federal governments expanded as women became an increasingly

Although the economy is showing only a slow rate of growth, consumer spending actually showed an increase for the month of March. But, don't be fooled - that's a bad sign, according to "CBS Evening News" anchor Katie Couric.

"[T]he government reported today that consumer spending in March shot up twice as much as economists were expecting, and it's not because we're buying more - it's because the prices are so much higher, especially food," Couric said on the May 1 broadcast.

However, crediting consumer spending growth, up 0.4 percent according to the Commerce Department, to food inflation is not accurate, according to economist Dr. John Lott.