On The Last Word with Lawrence O’Donnell Wednesday night, MSNBC National Affairs Analyst John Heilemann wrote off Republican responses to President Trump’s immigration policy as little more than self-interested. Heilemann argued that Republicans were facing an existential crisis and that “this policy was going to put 100 Republican seats in jeopardy.”

Friday on Morning Joe, Connecticut Democratic Senator Richard Blumenthal spoke about Jeff Sessions’ recusal. The hosts pressed and tried to coerce him into discrediting Sessions. The panelists asked Blumenthal what his opinion of the Attorney General’s current credibility was, as well as his and others’ capability to trust Sessions amid perjury speculation. To say the least, this was curious considering Senator Blumenthal has been severely criticized for lying about serving in Vietnam.

In response to host Joe Scarborough assessing the Santorum candidacy as an amateur operation, Heilemann fired back with the following absurd and disgusting comment, “The thing we saw in the debate which is his tendency to be Bob Dole-like and senatorial. Locked in legislative tivies [sic] on one side and then on these cultural issues to have these kind of Tourette's-like outbursts of sincerity that are just very indiscipline [sic].” 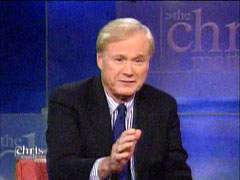 On his syndicated "Chris Matthews Show" on Sunday, Chris Matthews seemingly sought to do his self-proclaimed "job" of making sure Barack Obama's administration is a success by featuring a panel of guests who praised the incoming team and the President-elect's ability to use his political capital to pass "big packages to avert a depression." There was only twelve seconds of negativity about Obama during the entire hour-long show, and that was when columnist Kathleen Parker noted that some Hispanic organizations are unhappy with Obama because they feel that there is not enough Hispanic representation in his appointments.

The first topic of discussion was the economy and Matthews anxiously wondered whether Obama could "get a big head of steam to save the American economy and keep that head of steam so he can pass all the bills he needs to do the job?"

John Heileman of New York Magazine gave an emphatic "yes" along with four reasons to support his answer including, "I mean, [Obama] won a clear mandate" and "how well [Obama's] done in this transition and the way it's been received by both parties is having been arguably the best transition that anyone in our lifetime has ever seen."