Jim Cramer just keeps paying the price for his heresy. Ever since his March 3 remarks calling Obama's policies "greatest wealth destruction I've seen by a president," the CNBC "Mad Money" host has been under attack. First it was the back-and-forth with the White House, then he was skewered by comedian Jon Stewart. Now CNN and a former high-ranking public official have targeted him.

Cramer, who is set to appear on Comedy Central's "Daily Show" on March 12, was featured in a segment of that day's CNN "American Morning" reporting on a video he did for TheStreet.com in 2006, in which he explained how the hedge fund he once managed would manipulate stock prices.

"You know, a lot of times when I was short and I was positioned short, meaning I needed it down, I would create a level of activity beforehand that could drive the futures," Cramer said in the three year-old video. "Similarly, or if I were long, and I would want to make things a little bit rosy, I would go in and take a bunch of stocks and make sure that they're higher and maybe commit five million in capital to it and I could affect it."

Within the first few days of Israel’s campaign in Gaza, the Israeli military struck the Islamic University of Gaza, charging that the school served as a weapons research facility for Hamas. But while CNN, FNC and MSNBC all at some point reported on the school’s links to Hamas, CBS and NBC ignored the terrorist group’s connection in all its reports, while ABC vaguely noted that it was popular with Hamas students while still calling it a "non-military target." CBS, which had initially ignored the strike when it happened in late December, ran a report on the Friday, January 30, CBS Evening News in which correspondent Alan Pizzey, instead of informing viewers of the school’s reported role in terrorism, seemed more concerned that the damage would delay students from graduating, and relayed that "even the Islamic University" was bombed, suggesting it was an unreasonable target. After beginning the story focusing on a college-aged Palestinian man who was collecting explosive material to build bombs for revenge against Israel, Pizzey continued: "It will go in Qassam rockets – payback, the bomb maker says, for the destruction that has been part of his life since birth. Even the Islamic University was pounded by airstrikes, putting students' chances of graduating in jeopardy."

Then came an anti-Israel soundbite from one female student, named Nasser Barakat: "It's clear for us they want to attack everything, single thing in our life and every place in Gaza in order to destroy the whole community – not only the fighters, but the whole community."

By contrast, on December 29, during the 9:00 hour of MSNBC News Live, correspondent Tom Aspell reported: "Starting in the early hours of this morning, [the Israelis] attacked a building belonging to the Islamic University inside the Gaza Strip. The Israelis saying that the Hamas activists had been using it as a laboratory to develop weapons."

CNN's Jim Acosta: Obama Inaugural Speech 'Could Be One For the Ages' 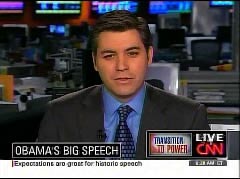 CNN correspondent Jim Acosta hyped the forthcoming inaugural address of President-elect Barack Obama during a report on Tuesday’s American Morning: “...Barack Obama’s inaugural address may be more than the speech of his lifetime. Historians and speechwriters say it could be one for the ages, if he can rise to the occasion.” He reenforced this sentiment with clips from a former Clinton-Gore speechwriter who predicted that it’s “a pretty good certainty that you’ll have schoolchildren reading this speech hundreds of years from now” and a professor who claimed that “it’s almost impossible for Obama to fail.”

Co-host John Roberts introduced Acosta’s report, which started 25 minutes into the 6 am Eastern hour of the CNN program, by focusing on the “great anticipation about the inaugural address” and how many “expect it to stand with some of the greatest ever presidential inaugural speeches.” Acosta began with his “speech of his lifetime...one for the ages” line,” and played a clip from Obama’s 2004 speech at the Democratic convention. He echoed Roberts’s earlier lines by stating how “the stage is being set for an address that’s destined for the history books.”

On Thursday’s Newsroom program, CNN correspondent Jim Acosta indirectly compared the Obama family to the pregnant Virgin Mary and St. Joseph looking for a place to stay in Bethlehem during a report about the unavailability of the Blair House: “...[I]t’s still not clear why there wasn’t enough room at the inn for the Obamas. The 70,000 square foot complex is actually bigger than the White House. There are 119 rooms, 14 guest bedrooms, 35 bathrooms, four dining rooms, dry cleaning facilities, an exercise room, and a fully-equipped hair salon.” Acosta also played clips from two sympathetic liberals who bewailed the situation.

Acosta began his report by presenting the lack of accommodations at the presidential guest house as a “Washington mystery.” He then played his first clip from Allan Lichtman, a professor at American University who unsuccessfully ran in the Democratic primary for U.S. Senate in Maryland in 2006. The on-screen graphic described Lichtman, who ran on anti-war, pro-abortion platform in the primary, as merely a “presidential historian.”

CNN Used Hannity to Highlight How Blagojevich Scandal is a 'Distraction' 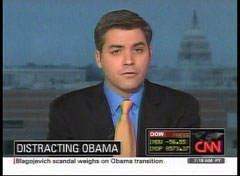 During a report on Monday morning’s Newsroom program, CNN correspondent Jim Acosta used a clip of Sean Hannity from Fox News Channel, along with clips from two of their resident Obama defenders, to outline how Blagojevich corruption scandal was a “distraction” for President-Elect Barack Obama. The graphic on-screen throughout the report even stated how the scandal was “Distracting Obama.”

Acosta began his report with an online ad from the Republican National Committee, which highlighted “Obama’s past ties to Illinois Governor Rod Blagojevich and questioning the president-elect’s handling of the scandal” and how “[c]omplete with eerie music -- this...website video has the feel of a campaign attack ad.”

The CNN correspondent then noted how “not all Republicans approve the message,” including Senator John McCain, who suggested that Republicans “should try to be working constructively together” with the incoming administration instead of focusing on possible connections to Blagojevich. Acosta continued on this point by introducing the Hannity clip: “Even conservative Sean Hannity has noted what federal prosecutors have made clear, that there are no allegations of wrongdoing facing the next president.”

During the actual report, correspondent Jim Acosta highlighted such "scare tactics" from both presidential candidates. First, he described how McCain "is telling voters to be afraid, very afraid of Democratic dominance in Washington." He later stated how Obama "has his own boogieman, as in the man who has controlled the White House for the last eight years," meaning President Bush. Note that while Acosta gave examples of both candidates playing the so-called fear card, Chetry’s preview only referred specifically to McCain.

On Monday’s American Morning, CNN correspondent Jim Acosta tried to throw a bit of cold water on the news that tens of thousands showed up in central Florida for a Sarah Palin camapign rally on Sunday. When co-host John Roberts asked about the high turnout, Acosta replied, "[T]his was an enormous crowd out here in Florida. She is still very much on script, John -- still very much on that teleprompter, talking mainly in generalities."

Roberts, besides asking about the Palin rally, asked if the Alaska governor had mentioned the proposed financial bailout during her speech, since the two of them had discussed Barack Obama and John McCain’s responses to the proposal and how it may affect how the two will campaign on the issue of the economy. Besides mentioning the "enormous crowd," he referenced how the campaign stop was located in "that central Florida -- critical I-4 corridor area," and how Palin played up McCain’s credentials with economic issues.

Now that Congress has recessed, and since the conventions aren’t for a couple of weeks, Thursday’s The Situation Room turned back to the "hot" issue of what many liberals are calling on congressional Democrats to do: arrest and lock-up Karl Rove for his failure to testify on the issue of the firing of U.S. attorneys in late 2006.

CNN correspondent Jim Acosta, as part of a report on this possible move by the Democrats, conducted a search for the supposed jail inside the U.S. Capitol. He also addressed the little-used power of the legislature to arrest and try government officials for contempt of Congress.

Acosta began by describing the liberals’ fantasy: "Just think, some on the Left say: Karl Rove and the Capitol slammer." During the segment, he interviewed George Washington University Law School professor Jonathan Turley (who links to Daily Kos and ProgressiveDem.com on his personal website and is lead counsel for convicted terror financier Sami al-Arian) and Associate Senate Historian Don Ritchie for the segment. When asked about contempt of Congress charges, Turley quipped, "The defendant is brought forth by the Sergeant-of-Arms, and in the case of Mr. Rove, it shouldn't be difficult. He's a consultant of Fox News a block away from the House floor."

CNN correspondent Jim Acosta, during a report on the importance of Colorado in the upcoming presidential election on Monday’s "American Morning," labeled Colorado Governor Bill Ritter a "self-styled cowboy centrist," despite his liberal record on issues such as abortion and special rights for "trans-gendered" people.

Acosta’s label is puzzling, since Governor Ritter hasn’t specifically refer to himself as a "cowboy centrist," neither during the interview or elsewhere. The exact term doesn’t even come up in a Google search. During the report, the CNN correspondent did run video of Ritter wearing cowboy boots, and the Governor claimed how his state had started to "trend to leaders who are pragmatic, who are centrist," a reference to himself. But the governor’s own proposals and some of bills he has signed since beginning his term in January 2007 point to a politician who is anything but centrist.