Kurtz: Helen Thomas Has Been Excused for Saying Questionable Things for Years 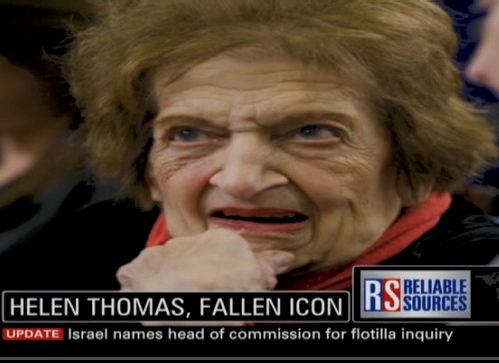 CNN's Howard Kurtz on Sunday said an inconvenient truth that few in his industry would care to admit: "Helen Thomas has been saying all kinds of questionable things in [the White House] press room for the past decade, but her colleagues, for the most part, had given her a pass until now."

This indeed is the real lesson behind last week's retirement of the nation's longest living member of the White House press corps: she for years was allowed by her colleagues to regularly get away with what most of them knew was unacceptable behavior.

Interesting that media members are learning this lesson only when one of their own falls from grace. The question is whether or not they'll recognize that they should always be scrutinizing each other's performance in order to maintain the integrity and professionalism key to an industry that is charged with policing government and the politicians that serve our very nation.

This seems especially important given how the same people now admitting they let Thomas get away with media malpractice ignored all journalistic standards during the last presidential campaign and have continued to do so since Barack Obama was inaugurated.

Consider that as you watch Kurtz and his panel discuss the Thomas affair on the opening segment of Sunday's "Reliable Sources" (video follows with transcribed highlights and commentary, full transcript at end of post):