News broke early this morning that NBC News has fired their longtime morning news anchor Matt Lauer after being accused of sexual harassment from a colleague at NBC. Lauer’s hypocritical treatment of Bill O’Reilly, Trump and others has come back to bite the liberal news anchor, now facing similar accusations. However, this 2012 clip from the Today show might be one of the most awkward throwbacks yet.

VIDEO NBC Advises Shoppers to Throw Groceries at Robbers, No Mention of Guns

In a report on Friday’s NBC Today about how people could defend themselves during a convenience store robbery, National Investigative Correspondent Jeff Rossen and security expert Mykel Hawke suggested that shoppers should hurl groceries off the shelves at the armed criminals in an attempt to escape. The possibility of using a firearm for protection was never mentioned.

In a report for Monday’s NBC Today, correspondent Jeff Rossen touted a “rare jailhouse interview” with a convicted burglar to offer tips to viewers on how to prevent a home invasion. However, even as the incarcerated criminal explained that traditional methods such as security alarms and cameras were poor deterrents, Rossen failed to inquire about homeowners using firearms in self defense.

On Wednesday’s NBC Today, co-host Savannah Guthrie introduced “a new Rossen Reports series, Keeping You Safe” to show off “new technology that promises to protect you and help avoid attackers.” Correspondent Jeff Rossen declared: “Can your smart phone help protect you when you’re out there alone? This morning, new apps and devices you can get right now that could save your life and we're trying them out.”

After framing a doctor's plea to end gun violence as a push for gun control earlier this week, NBC's Today teed up D.C.'s police chief to defend the city's strict gun regulations and slap gun "loopholes."

In a segment on the Navy Yard shooter, correspondent Jeff Rossen transitioned into gun control. "You have fought hard for gun control. Yet here is somebody who is clearly mentally disturbed, but he was still able to legally get a gun. What's wrong here?" he asked D.C. police chief Cathy Lanier.

NBC: 'Colorado Has Some of the Weakest Gun Laws in the Country'

Seizing on the Colorado theater shooting to push for stricter gun laws, on Monday's NBC Today, co-host Savannah Guthrie teased an upcoming story: "...an undercover report that reveals just how easy it can be for anyone, even violent criminals, to buy assault weapons, no questions asked." Later introducing the segment, she fretted: "...it turns out Colorado has some of the weakest gun laws in the country." [Listen to the audio or watch the video after the jump]

Investigative correspondent Jeff Rossen began his hidden camera expose of online gun selling by admitting that it had little to do with the circumstances surrounding the Colorado tragedy: "It turns out this shooter, this alleged shooter in Colorado, had no rap sheet, so he was able to buy his guns in a store legally." Rossen quickly added: "But even if he had a violent criminal record he still could have bought them."

NBC's Today on Monday delved into the tabloid gossip of Robert Kennedy Jr and his late wife Mary Kennedy, who killed herself last month. The report featured documents "obtained" by Newsweek. Reporter Jeff Rossen highlighted RFK Jr's. complaints, including court affidavits claiming, "Mary's violence and physical abuse towards me began before we were married."

Rossen touted the grim details of Kennedy's complaints, reciting, "When he went over to the house, 'Mary was intoxicated. I opened the door and she leapt out of her bed and hit me with a roundhouse punch.'"

ABC, CBS, and NBC spotlighted the Komen foundation's about-face on funding Planned Parenthood on their Friday evening newscasts, and played up the apparent role of social media in getting the charity to reverse its earlier decision. On World News, ABC's Diane Sawyer trumpeted the "dramatic day for people power," while on Nightly News, NBC's Lester Holt concluded, "score one for the power of social media."

The Big Three outlets also covered the 180 by the breast cancer organization on their Saturday morning shows. Altogether, the networks added seven more reports to the 13 from the first 60 hours or so of the controversy, bringing the total to 20 since February 1, versus only three on the face-off between the Catholic Church and the Obama administration since January 20 (the MRC documented and highlighted this imbalance in a report on Friday; ABC and NBC added mentions on their Sunday morning political shows).

The ABC and NBC evening newscasts have focused stories on Billy Bulger, the long-time Massachusetts Democratic political hack who is the younger brother of just-captured reputed mass-murdering Mobster Whitey Bulger, but both refused to identify Billy Bulger’s party affiliation. (The CBS Evening News has, so far, not even mentioned Billy.)

“While Whitey Bulger was running a gang, his brother was a celebrated star of Massachusetts politics,” ABC anchor Diane Sawyer trumpeted on Thursday night. On Friday night, NBC forwarded MSNBC’s Lawrence O’Donnell to vouch that Billy had no information about the whereabouts of his fugitive brother while Jeff Rossen marveled: “Just as investigators say Whitey was ordering hits, his brother, Billy Bulger, was rising in state government, President of the Massachusetts state senate and later President of U Mass.”

NBC Sympathizes With Disgraced IMF Chief, Promotes Conspiracy Theory He Was 'Set Up'

While reporting on the sexual assault case against International Monetary Fund Chairman Dominique Strauss-Kahn on Tuesday's Today, NBC correspondent Jeff Rossen noted how the would-be Socialist Party candidate for the French presidency had "worried his political opponent, current French President Nicolas Sarkozy, would try to frame him with a fake rape..."

Rossen further added that Strauss-Kahn once told a French newspaper that the rape victim would be "promised 500,000 or a million euros to invent this story" by Sarkozy. Following Rossen's report, correspondent Michelle Kosinski highlighted French outrage over Strauss-Kahn's arrest: "I would say that the reaction ranges from disbelief to outright disgust. To see their VIP paraded before cameras, the socialists are calling it 'inhumane'....they're saying that this looks like a humiliating public exhibition like something from ancient times."

The headline on screen during the segment read: "French Conspiracy Theories; Was Banker Set Up as Part of Political Plot?"

The saddest media bias on display this week was the desperate hunger and thirst for that slice of Ratings Heaven known as Charlie Sheen's Continuing Moral Collapse. He's been All Access Charlie, granting high Nielsens wherever he goes, speaking of how he is High on Himself and "bi-winning" with his two "goddesses" camped at his abode. Network interviewers have tried not to alienate their guest with tough questions. Washington Post TV writer Lisa de Moraes ably brought her trademark snark to this amoral parade. First there was ABC's 20/20 with Andrea Canning on Tuesday night:

"Well, I mean, wow, listen to that statement," Sheen joshed back. 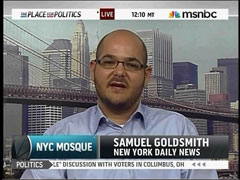 Appearing in the 2:00PM ET hour on MSNBC, New York Daily News reporter Samuel Goldsmith cited a poll featured on the paper's website, about opposition to the Ground Zero mosque: "[it] shows that 70% of New Yorkers say that they think the opposition is out of hatred and religious intolerance."

Unfortunately, Goldsmith forgot to mention that it was a completely unscientific poll that only appeared within articles on the topic and allowed people to potentially vote numerous times. The slanted poll question read: "Is opposition to the building of a mosque near Ground Zero intolerant?" The three responses offered were: "Yes, it's pure religious bigotry against Muslims; No, you can be against because it dishonors victims of Sept. 11; Maybe, but the sensitive thing to do is to move it further from the WTC site."

Goldsmith touted the Daily News poll after anchor Jeff Rossen cited a scientific poll on the issue: "A new Siena College poll suggests – and we actually have the results right here – that 63% of New Yorkers oppose this Islamic center. Only 23% support it." After promoting the unreliable online poll, Goldsmith argued: "...there's a lot of voices coming out....It's hard to really get a grasp of what the public opinion is, I think."