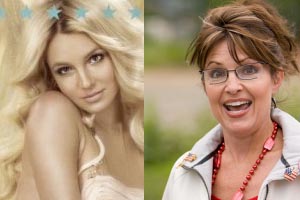 As if Sarah Palin hasn’t been torn apart enough by the media, try this one on for size: Alaska Governor Sarah Palin is the equivalent of Britney Spears.

Gottlieb’s article “Boston sees just a piece of Britney Spears” appeared in the Boston Herald on March 17, just one day after Spears’ sold out concert at the TD Banknorth Garden Entertainment Arena in Boston. While the article largely described Spears’ lackluster performance on stage in her comeback tour, Gottlieb just couldn’t resist a swipe at Palin to get the article rolling.