The TV networks have aggressively demonstrated their dislike of Arizona’s state law “cracking down on illegal immigrants,” a law that “pits neighbor against neighbor.” An MRC review of morning and evening news programs on ABC, CBS, and NBC from April 23 to July 25 found the networks have aired 120 stories with an almost ten-to-one tilt against the Arizona law (77 negative, 35 neutral, 8 positive).

The soundbite count was also tilted over the last three months -- 216 to 107, or an almost exact two-to-one disparity. Network anchors and reporters sided against defenders of border control and championed sympathetic illegal aliens and their (usually American-born) children. In 120 stories, they never described “immigrants rights activists” as liberals or on the left.

Between them, the three networks described the Arizona law as “controversial” on 27 occasions, despite its popularity in opinion polls. The Obama administration’s decision to sue file a lawsuit against Arizona to crush the law was never described as “controversial.”

ABC and NBC Champion Illegal Alien Cause: ‘Will an Army of Protesters Be Heard?’ 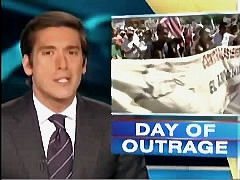 Another pro-illegal alien protest and, once again, the networks champion the cause. Four weeks after the broadcast network evening shows trumpeted May Day marches against Arizona’s effort to enforce federal law, another round of marches prompted ABC and NBC on Saturday night to push the left-wing cause.

“Day of outrage, anger on the streets of Phoenix and across this country tonight,” ABC anchor David Muir declared, pleading: “Will an army of protesters be heard?” Reporter Jeremy Hubbard began his story for World News: “In their most massive numbers yet, a deluge of adversaries rally and rail against what could soon be the law of the land in Arizona.”

On NBC, Telemundo’s Janet Rodriguez also presented the subject through the prism of those against the popular law: “Critics say the law unfairly targets Hispanics who make up about a third of the state's population. Recent college grad Martin Moreno worries about racial profiling” while another protester claimed “this law violates our fundamental principles of human dignity,” before Rodriguez featured a woman holding a sign from ANSWER LA, the far-left/communist-affiliated group. Rodriguez, however, described her simply as “from Long Beach.” The woman smeared as “racists” the majority of Americans who support the law.