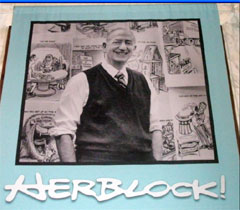 The Library of Congress' new exhibit on Herbert Block (often known as "Herblock") completely avoids labeling the famous cartoonist as a liberal, instead portraying him as an "independent spirit." The retrospective features 81 poster-sized drawings by the late Washington Post artist and never once identifies Block's politics.

The exhibit, which opened on October 13, 2009, and can be found in Washington, D.C., pretends that the cartoonist was a bold truth-teller. Taking in the display on Saturday, I was struck by how often this myth was touted. One section gushed over Block, who worked for the Post from 1946 to his death in 2001, for practicing his art "with fearless independence." Yet, he was really just a liberal journalist, something the exhibits celebrate, even if the L-word isn’t used.

Visitors are told that "Reagan appalled Block in a way that only Joseph McCarthy and Richard Nixon had done before." One cartoon showed Ronald Reagan driving by the homeless, ignoring their plight. (In the comic, the President quipped, "Strange how some choose to live like that, instead of choosing to be rich like us.")