When Congress in 2006 voted overwhelmingly to construct a barrier on the U.S.-Mexico border, TV news networks barely noticed. Perhaps even more surprising to today’s viewers of broadcast news, reporters back then admitted that the border fence worked.

Saturday's NBC Nightly News hyped a poll finding that 64 percent of Californians would be willing to pay more taxes "if the money went to public schools." (Video below)

Substitute anchor Kate Snow included a plug for the report in the opening teaser: "Tax hike. Why people in one state are saying 'Bring it on.' Tonight, why they're willing to pay more."

Previewing yesterday's vote on the DREAM Act, which passed the House 216 to 198, NBC News correspondent George Lewis empathized with supporters of the measure on the December 8 "Nightly News."

Lewis acknowledged the bill's dim prospects for passing the Senate, but stood in awe at the apparent surge in support for the bill: "By the thousands, young people, who as children were brought here illegally by their parents, have been going public in support of the DREAM Act."

The network reporter used interviews with young supporters of the bill to pull on the viewer's heartstrings.

"It would be a waste if they graduated from high school and they're not able to pursue higher education because of their legal status," lamented William Perez, a developmental psychologist at Claremont Graduate University.

"We want to contribute back to a society, a society that has been my own," implored Maria Duque, an illegal immigrant attending Fullerton Community College. 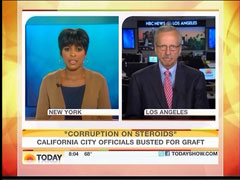 NBC's Tamron Hall blared, "It's being called 'corruption on steroids'" while George Lewis added, "It's been an angry summer in Bell, California, once people learned that city officials awarded themselves huge six figure salaries at taxpayer's expense." However neither of them mentioned, in two different stories on Wednesday's Today show, that those corrupt officials belonged to the Democratic Party. Lewis, strangely, couldn't even bother to identify the party of Jerry Brown -- who has a soundbite in the piece going after the officials -- as he just called him "The California attorney general running for governor."

Incidentally, the Today show wasn't the only news outlet to conveniently drop the "D" label next to those officials accused of bilking California taxpayers. As Newsbusters' Lachlan Markay pointed out on Tuesday, "ABC, CBS, the Los Angeles Times, the Associated Press, Bloomberg, USA Today, CNN, MSNBC, NPR, and the San Francisco Chronicle all reported on the arrests today without mentioning party affiliations." 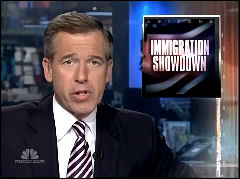 On Friday night, NBC promoted leftist May Day protests against Arizona’s new immigration enforcement law while CBS, after a full week of coverage focused on outrage against it, finally bothered to get around to how murder and crime got the public behind it. Declaring Arizona is “at the center of a growing storm over its tough new immigration law,” NBC anchor Brian Williams touted: “Activists across the country are planning a series of May Day protests tomorrow against the law.”

Reporter George Lewis announced: “Those May Day protests are expected to draw hundreds of thousands of people into the streets from Los Angeles to Washington, D.C., to here in Arizona,” where Republican Governor Jan Brewer defends the measure even though, as if it’s relevant, Arnold Schwarzenegger, does not like it: “Last night on the Tonight Show with Jay Leno, California Governor Arnold Schwarzenegger disagreed with Brewer.” Schwarzenegger: “I would never do that in California, passing laws like that. No way.”

NBC: Screw Your Neighbors -- Walking Away from Your Mortgage is 'Ethical,' 'Good Business Decision'

By Anthony Kang | April 20, 2010 2:45 PM EDT
Surprise: NBC finally found a business it likes - even a business decision it likes: companies that help homeowners who decide to walk away from their mortgages.

"New figures show foreclosures in the U.S. are up about 35-percent from a year ago," Matt Lauer kicked off an April 20 segment of "Today" that encouraged homeowners - even those financially comfortable - to simply walk away. "And a growing reason why are people who simply choose to walk away from their mortgage even when they can afford it."

"Experian, the credit-monitoring service, says 588,000 borrowers - or 18-percent of those who have defaulted on their mortgages in the past year - did it for strategic reasons and not because they're broke," NBC's George Lewis reported. "It's called a strategic default, walking away from a home and enduring foreclosure out of frustration with a bad investment."

On the scene with the Schreur family in Folsom, California, Mr. Schreur acknowledged in an interview that although his family was not in any financial distress, a sharp decline in house value incited the family to default, as any other option "made no sense."

Laura Ingraham Throws Down With Matt Lauer on Today

Laura Ingraham didn't waste any time getting into it with NBC's Matt Lauer, on Monday's Today, as the conservative talk show host and author took Lauer, his colleague George Lewis and MSNBC to task for their slanted reporting of Sarah Palin and the tea party. After a Lewis set-up piece, in which the reporter asked if Palin gets "people too riled up?" Ingraham, in her interview with Lauer, charged him with bias: "How do you go from Sarah Palin giving a speech to saying did she rile up the people too much and then talk about death threats? I think that kind of reporting, really is what drives people crazy about the dinosaur media." Lauer countered that "some people" have noted that Palin's "comments" and "graphics" have "incited some people." [audio available here]

Later on in the interview Lauer claimed Palin was "polarizing" to which Ingraham, citing low approval ratings for Obamacare, fired back at Lauer: "Well I think that, if you want to look at polarizing people right now, I wouldn't look at Palin, I'd look at Barack Obama."

Finally Lauer, making his best attempt at being balanced, asked if there was too much "vitriol" and "intimidation" from both sides. Ingraham acknowledged that "folks get angry" on from the right and left, but then slammed MSNBC for stoking that vitriol as she threw back at Lauer: "We have people on, frankly, your cable channel saying really hateful things about conservative commentators and politicians" as seen in the following exchange:

Every time voters face a ballot initiative of some sort that would raise their taxes, proponents of such measures will trot out any of the following components to champion the cause - school children, policemen, firemen or the release of criminals from jails.

But this time, the June 3 "NBC Nightly News" waited until after California voters denied passage of initiatives that would raise their taxes to say, "I told you so." NBC correspondent George Lewis followed up a dire, one-sided June 3 "Today Show" report with a "Nightly News" segment that blamed the budget cuts for one supposed hardship story - a California school district forced to cancel summer school, which in turn made it impossible for one child's mother to look for a job.

NBC: Impediment to Raising Taxes a 'Problem' for California 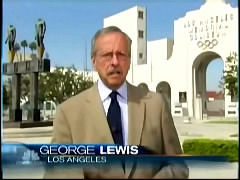 A night after ABC's Laura Marquez blamed California's budget deficit on the citizenry's “unwillingness to raise taxes” and a law “mandating an almost unachievable two-thirds vote by the legislature to raise taxes,” on Wednesday's NBC Nightly News George Lewis similarly ignored soaring state spending as he focused on victims of upcoming budget cuts and asserted: “Part of California's problem is that it takes a two-thirds vote in the state legislature to raise taxes.”

Though the ballot initiatives turned down by voters on Tuesday involved raising and/or extending an income tax surcharge, the sales tax and the tax on cars, Lewis euphemistically described them as “a series of ballot measures, backed by [Governor Arnold] Schwarzenegger, aimed at easing the deficit.” Lewis concentrated on potential victims: “$5.3 billion would come out of education in the Governor's proposed budget, $2 billion from health programs and hundreds of millions from the state's prison system” while a college student, Lewis paraphrased, complained they “are in a bind as California hikes fees to make ends meet.” 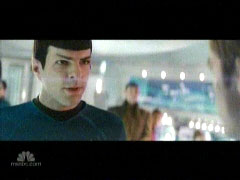 Concluding a Thursday NBC Nightly News story on summer movies, correspondent George Lewis previewed the new Star Trek film, set to open on Friday, and found it relevant to highlight how “some Trekkies have compared the Spock character, the product of a mixed marriage between a human and a Vulcan, to President Obama.” Those “some Trekkies” would be Newsweek's Steve Daly, author of last week's cover story, “We’re All Trekkies Now,” who proposed in a soundbite: “In a certain sense, Spock the character has dealt with some of the same prejudices and problems that our new President does.”

In the piece for the May 4 edition of the magazine, Daly asserted: “Spock's cool, analytical nature feels more fascinating and topical than ever now that we've put a sort of Vulcan in the White House.” And “like Obama, Spock is the product of a mixed marriage (actually, an interstellar mixed marriage), and he suffers blunt manifestations of prejudice as a result.” Daly also hailed how “with the willfully hegemonic Bush administration now gone, the tenets of [original Star Trek creator Gene] Roddenberry's fictional universe feel very much in step with current events,” since:

The Obama foreign policy, at least for now, emphasizes cross-cultural exchange and eschews imperialistic swagger. That sounds very much in sync with the Federation's Prime Directive, which stipulates that humanity should observe but never interfere with alien cultures (no Iraq-style invasions, in other words).

By Mike Sargent | March 30, 2009 3:40 PM EDT
NBC climastrologer and all-around nice guy George Lewis said on Sunday's "Today" show that global warming is at least partly the fault of mankind. More disturbing, however, is the fact that exactly zero consideration was given to actual scientific criticism of such a viewpoint.

CARTER ROBERTS, World Wildlife Fund: We're definitely asking people to do a couple things. To turn off the lights, but also to cast a light on one of the greatest problems in the 21st century.

GEORGE LEWIS, NBC News correspondent: That problem, global climate change and the role that humans play in it. [Picture of industrial site, complete with smokestacks]

This time, the "CBS Evening News" traveled all the way across the pond to pushing the alarmists' global warming agenda.

The March 27 "Evening News" went to the coastlines of England to show melting ice caps causing people to lose their homes.

"Much of the effects of climate change have been couched in terms of if or when its effects will be felt," CBS correspondent Mark Phillips said. "Well, here there is no ‘if.' And when is now. So choices are being made. It's called managed retreat. Some areas of coastline deemed indefensible are being abandoned. Climate change is producing winners and losers, and Diana Wrightson and the others here have already lost."