President Obama has extensive ties to Goldman Sachs. Yet even given record-breaking financial contributions and sketchy relationships between Goldman executives and Obama officials at the highest level, the mainstream media will not afford Obama the same scrutiny it gave to George W. Bush during the collapse of Enron.

Obama's inflation-adjusted $1,007,370.85 in contributions from Goldman employees is almost seven times as much as the $151,722.42 (also inflation-adjusted) that Bush received from Enron. Goldman was one of the chief beneficiaries of the TARP bailout package -- supported by then-Senator Obama -- and has been a force for -- not against -- Democratic financial "reform" proposals currently under Senate consideration.

People Magazine practically slipped over their drool-laden piece yesterday involving First Lady Michelle Obama's decision to recycle ornaments for the White House Christmas tree.  The opening statement of this piece is so very complimentary of this novel decision, you'd think it was a decision that qualifies Mrs. Obama as a nominee for the Nobel Peace Prize next year.  (Cause that's a little ridiculous, no?)

"It used to be that Christmas at the White House dazzled visitors with the glitter of thousands of fairy lights. But not this year. Not in this economy and not with this practical-minded first lady."

Apparently, first ladies of years past had celebrated Christmas in the White House with a total disregard for the economy and the environment.

Shortly after the opening paragraph's praising of the current White House Christmas tree, the People article takes a swipe at the Clintons and Bushes for not being more like the Obamas: 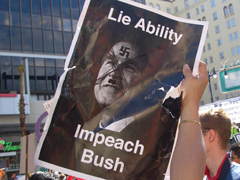 A liberal Washington Post columnist laments today of the loss of civility in the public discourse. Strange that he is suddenly outraged that Americans would dare call Obama a socialist or a fascist, given that Bush-Hitler comparisons were widespread during the previous administration.

Liberals in the media spent the summer and early fall bemoaning signs at town hall protests and tea party rallies calling Obama a socialist or communist comparing him to Hitler (incidentally, many of these signs were actually created by supporters of uber-leftist Lyndon LaRouche, as reported by Seton Motley here and here). These pundits had no such admonitions for signs at anti-war rallies during the Bush administration comparing him to Hitler and the Devil, and calling the president a fascist.

So the Post's E.J. Dionne's complaints about the loss of civility in the debate over federal politics fit right in with the narrative liberal pundits have been pushing since last year: comparing an American president to a murderous dictator is unacceptable...if that president is a Democrat.

President Obama and other liberals have frequently criticized the previous administration for a lack of transparency. But now it seems the Obama White House is practicing the same things liberals criticized President Bush and Vice President Cheney for.

So on the July 22 edition of “Fox and Friends,” anchor Brian Kilmeade brought to viewer’s attention the Obama administration’s hypocrisy on their usage of the “Presidential Communication Privilege.”

Kilmeade recalled the “outrage” that erupted during the two terms of President Bush when energy executives met in secret with Vice President Dick Cheney and the public questioned their influence on the President’s energy plan. The administration claimed “Presidential Communication Privilege,” and never released the names. Subsequently, “Bush was vilified because of that.”

Hypocritically, President Obama has done the exact same thing with his health care plan. Fourteen different executives involved with the drug, medical, and hospital industries, have gone to the White House to advise the President on the health care reform bill.

Washington Post Food section contributor Bonnie Benwick cooked up just a hint of bias in an otherwise politically unseasoned obituary for Milton Parker, a founding co-owner of the landmark Carnegie Deli in Manhattan.

Unlike Governor Palin, President Bush did not need to be interviewed in front of a turkey slaughter for the media to attack him over turkeys. As part of an annual tradition at the White House, President Bush pardoned two fortunate turkeys, Pecan and Pumpkin, on Wednesday.

When the reader looks further into the article, Bush did not eat the two turkeys he just “pardoned” but simply ate turkey for Thanksgiving like the rest of the United States did.

Washington Post staff writer Manuel Roig-Franzia among others used the annual event as an opportunity to take a shot at the president(my emphasis throughout:)

Catching up with an item from a few days ago: Barry Sonnenfeld, a movie director (Men in Black) and now the Emmy-winning executive producer and director of ABC's dramady Pushing Daisies, predicted on Wednesday's Late Show that amongst the things he's “worried” President Bush will do before leaving office is “go out by pushing the button and destroying all life on Earth.” That was too much for David Letterman, hardly a Bush fan (in June he asked if Bush has “any humanity?”), who responded: “It's just a little bleaker than I would have hoped for -- the idea that he would actually detonate the planet in a moment of despair.”

Sonnenfeld, who speculated about Bush hiding bin Laden, also wondered why Americans wouldn't vote for the “really smart” Barack Obama over John McCain who “finished second to last in his graduating class in college” and Sarah Palin, who “went to five different colleges,” and so “I'm thinking maybe she's got other talents than intelligence.”

With some mix of seriousness and humor you can judge yourself by watching the video clip (though how funny is it to joke about the President as some kind of religious zealot out to murder millions?), Sonnenfeld told Letterman he's “worried since it's October that George Bush will do one of three things: Either find bin Laden, who've they've had somewhere for eight months waiting to bring out” or “let's start a war with Iran. That's always a possibility.” Then:

And here's the third thing -- and I don't know much about the Bible and I'm not a big rapture guy -- but I believe George Bush is and what better way, if your polls are so bad, than to go out by pushing the button and destroying all life on Earth?

CNN’s Web site this morning tracked a developing story involving the stock market opening, by featuring a photo of an Iran anti-war protest. The photo, provided by our friends at the AP, was simply too perfect to pass up apparently. After all, any photo which includes a man brandishing a banner which reads ‘Jail Bush,’ is something that a biased news organization simply has to take. Pertinence be damned. Seriously, nothing says the economy quite like a placard reading ‘No attack on Iran.’ CNN probably could have found a photo that actually applied to the topic of a sliding stock market. Was a stock photo of a line graph with a red arrow pointing down not available at the most trusted name in news? No picture of someone ringing the opening bell? The story itself was titled ‘Wall Street Drops at Open,’ and to its credit, did not include the photo within the article. Oddly enough however, there was no mention of 'Iran' in the article that the above photo linked to either. Nor was there any mention of the word 'war.' Or 'protest.'

What does it say about Reuters' environmental coverage when the news organization can't even get a basic “factbox” correct?

This March 31 Reuters “factbox” was supposed to explain “What is the Kyoto Protocol?” Instead, the media conglomerate pushed a biased eco-agenda and omitted anything that cast a negative light on the treaty or revealed problems. There was no mention of Kyoto participants failing to meet their targets or Japan trying to renegotiate because Kyoto is harming its economy. Reuters failed to report that greenhouse gas emissions are rising in the European Union and in many Kyoto-participating countries, such as Canada. Some, like Austria and Great Britain, are actually doing worse than the US in emissions growth. By skewing the data included in this factbox, Reuters massaged data to fit an agenda and crossed into advocacy journalism.

Reuters began by framing the US as the bad guy (all bold mine):

Did the Documentary Feature Oscar Winner Bypass the Academy's Intent?

Earlier this week, NewsBusters' Tim Graham noted the downbeat mood in many of the nominated movies at Sunday's Oscars, as originally written up by a Washington Post staff writer. NB's Matt Sheffield addressed the Feature Documentary award winner, "Taxi to the Dark Side," and the dearth of libertarian or conservative representation in the list of that category's nominees.

Taxi to the Dark Side? Never heard of it. Did not even know it existed. They wonder why no one watches the Oscars.

Voodoodaddy is far from alone, and his comment begs a bigger question: Why, as I believe is the case, would a company make a film knowing full well that almost no one will see it?

How can that be?

By Michael Chapman | February 23, 2008 10:02 PM EST
Grunge and hippie-folk rocker Neil Young, who opposes President Bush's war in Iraq and released an album last year "Living with War" with a song called "Let's Impeach the President," nonetheless came to Bush's defense recently, saying he's a "leader" with perseverance. As Reuters reported (http://news.yahoo.com/s/ap/20080213/ap_en_mu/film_neil_young), in a conversation at the Sundance Film Festival, former band mate David Crosby said there should be a law that persons who can't pronounce the word "nuclear" shouldn't have control over nuclear weapons.

Exactly 20 years ago tonight, January 25, 1988, millions of Americans saw one newsman’s liberal agenda laid bare, as CBS anchor Dan Rather attempted to ambush then-Vice President George H.W. Bush, the frontrunner for the Republican presidential nomination, in a live TV interview on his CBS Evening News. But Bush held his own during the on-air confrontation, and the lasting effect was to reveal how Rather was driven by his personal biases, at one point lecturing the Vice President: “You’ve made us hypocrites in the face of the world.”