VIDEO Krauthammer: Hillary Has ‘Got a Martha Stewart Problem’ with Scandals, Misleading Information

Syndicated columnist and Fox News contributor Charles Krauthammer made his almost-daily appearance on the “All Star Panel” during Thursday’s Special Report and compared Democratic presidential candidate Hillary Clinton to businesswoman-turned-convict Martha Stewart in light of her e-mail server and Clinton Foundation scandals. “Look, right now, what it looks like is she's got a Martha Stewart problem, which is the false information, misleading or her aides or pressuring somebody, that's a pretty big category,” explained Krauthammer.

CNN's Chetry to Koran-Burning Pastor: You'll Have Blood on Your Hands 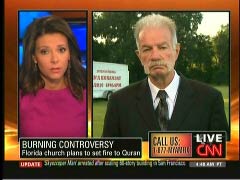 On Tuesday's American Morning, CNN's Kiran Chetry used General David Petraeus's denunciation of a planned Koran burning by a church to blast the church's pastor for any subsequent deaths of U.S. soldiers in Afghanistan: "Are you willing to have the blood of soldiers on your hands by this demonstration?" Chetry also lectured Pastor Terry Jones over his apparent lack of "refined" Christianity.

Chetry interviewed Pastor Jones 41 minutes into the 7 am Eastern hour. After asking him why he and his church were planning to burn Korans, the anchor launched into her critique of the minister: "I wanted to let you say your piece, because when I first read this story, I thought there's no way that this could be as bad as it sounds. It appears that it is. You're saying that you're going to burn the holy book of another religion to send a message to the radical elements of that religion, with no thought to the fact that you'd obviously be highly offending everyone in that religion. How do you justify that?"

Later in the segment, Chetry turned theologian and quoted Scripture to Pastor Jones as she continued to question his planned action: "What about turn thy cheek? I mean, this is- you know, Christianity at its most- you know, refined. It's that you just don't act out in violence. You don't act out in any manner of hate, that you turn thy cheek, that you don't rise to the nastiness or the level of payback that your perceived enemies do. I mean, isn't this the exact opposite of what Christ taught all of us to be and to do?"

The first six words (bolded by me) of Deb Riechmann's report from Kabul, Afghanistan for the Associated Press are refreshing:

"We are in this to win," Gen. David Petraeus said as he took the reins of an Afghan war effort troubled by waning support, an emboldened enemy, government corruption and a looming commitment to withdraw troops - even with no sign of violence easing.

It would have been even more refreshing if the AP's Riechmann, who obviously felt compelled to tick off as many of the reasons Petraeus and the troops he leads may not meet the goal as quickly as possible, would have reminded readers that Petraeus's boss, President Barack Obama, has been decidedly allergic to using the words "win" and "victory" in Afghanistan since his inauguration. One of her later paragraphs presented a perfect opportunity to remind readers of the president's aversion. She passed; she shouldn't have.

Petraeus, thankfully, feels no need to hold back, as noted later in Reichmann's report (bolds are mine):

(The following is satire -- I hope)

Yours truly has come across something the current crowd running our government might see as even more sinister. The Obama administration, the FBI, the Justice Department, and, most importantly, the White House's speech police simply have to get on this right away.

You see, General David Petraeus visited the Air Force Academy last week and may have uttered a word once thought to have been stricken from all speeches and discussions relating to military matters.

The word is .... v-v-v-v-vi .... well, I'd better let Tom Roeder of the Colorado Springs Gazette take it from here (bold is mine) in his November 5 report on Petraeus's appearance:

Give them credit for noticing. Pass out demerits for incompleteness.

Friday's USA Today carried a slightly inaccurate Page 1A tease ("Iraq is safer for US troops; October is on track to tie July for the month with fewest combat deaths"). It went to a top of Page 7A story ("US Deaths in Iraq on track for record low") that noticed how relatively well the month of October has gone for our troops in Iraq. That still is the case, with hours to go in the calendar month in Iraq. Reporter Charles Levinson even noticed that there have been no hostile US troop deaths in Baghdad during the entire month.

But Levinson missed the opportunity to notice even better longer-term results in Iraq. He also failed to notice that coalition troop deaths in Afghanistan, again with hours to go until the end of the month, are less than half of that seen in previous months. Finally, he didn't catch this remarakable fact, given the gloom that seems to abound over the supposedly intractable situation in Afghanistan -- Combined theater troop deaths in October have been the lowest in over four years. (Straight zeroes everywhere would, of course, be ideal.)

Here are the key paragraphs from Levinson's report: 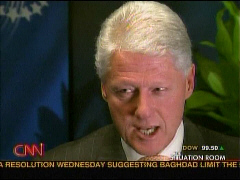 A preview of an interview of impeached former president Bill Clinton ran on Wednesday’s "The Situation Room," in which Clinton blasted "disingenuous" Republicans for their "feigned outrage" over MoveOn.org’s ad attacking General David Petraeus. Clinton put on his best "angry face" during the clip. "This was classic bait-and-switch....

Fallen Soldier MSNBC Used for 'Gotcha' Game With Rep. Blackburn Did Not Live in Her District

UPDATE -- SHUSTER APOLOGIZES: At 6:44 PM EDT, MSNBC broke into the Tucker Carlson show to air a terse apology from Shuster. See "My Take" below.

DAVID SHUSTER: On Monday evening while guest-hosting the 6 p.m. evening hour, I conducted an interview with Tennessee Republican Marsha Blackburn. The congresswoman spoke at length about a newspaper ad that criticized General Petraeus. In what I believed was an effort to examine Representative Blackburn's priorities, I then asked her to name the last soldier from her congressional district killed in Iraq.

She responded "the name of the last soldier killed in Iraq from my district, I do not know." After that response, I identified who I believed to be that fallen soldier, a Tennessean killed in Iraq last month. But according to Pentagon documents, that young man came from a town inside a neighboring congressional district, not from Representative Blackburn's, and for that, I apologize for that mistake.

Read past the jump for the rest of the story..

Garofalo Backs Rather, Declares Petraeus 'Dishonest...He Is Betraying Us'

Friday night on HBO's Real Time with Bill Maher, “actress/comic” Janeane Garofalo asserted she has “no doubt” that, on the Bush National Guard story, “there were executives at CBS that folded under right wing coercion” and she endorsed MoveOn.org's ad which maligned General David Petraeus as “General Betray Us.” The tattooed Garofalo, who has joined the cast of Fox's 24, charged: “Petraeus has been dishonest” and “is betraying us.”

On the Dan Rather lawsuit, she fretted incoherently about how “it's amazing how the right wing has done it in this country and it doesn't seem like it's a democracy at all when you let that happen.” On Petraeus and the MoveOn.org ad, she ludicrously saw the “mainstream media” as colluding with those who considered the ad over the line: “The thing is is to pretend that it's MoveOn.org that has the problem, and that the mainstream media allows that nonsense to continue. Yet, he is betraying us.”

Noel Sheppard's earlier posting, “Janeane Garofalo: 'Bush is a War Criminal,' 'O'Reilly Can Kiss My Fat A**,'” emphasized several other of her outrageous allegations expressed on the HBO show.

Maher on CNN: Petraeus and Maliki ‘Stooges’ For President Bush

Bill Maher gave an unsatirizable interview on Tuesday evening’s "The Situation Room" on CNN, spending a large portion of his ten-minute interview attacking, among others, General David Petraeus, Ambassador to Iraq Ryan Crocker, and Iraqi prime minister Nouri al-Maliki, labeling them "stooges" for President Bush. When host Wolf Blitzer asked about the recent congressional testimony of the general and the ambassador, Maher parroted the MoveOn.org line. "Well, it was a White House-written report. We know that. Bush has an interesting little scam going. He also quoted in his speech on Thursday night, Maliki. And he said basically that the Iraqi leadership is asking us to stay. So, in other words, he puts words into his stooges' mouths, and then, he quotes them."

See Update at foot with list of Petraeus press appearances.

The gravest charge you can level at a military man, as MoveOn.org essentially did to Gen. Petraeus with its infamous "General Betray Us" ad, is to call him a traitor.

But close behind in the catalog of calumny is to call a soldier a coward. And that's effectively what Frank Rich did in his [p.p.v.] New York Times column of today.

General Petraeus and Ambassador Crocker could grab an hour of prime television time only by slinking into the safe foxhole of Fox News, where Brit Hume chaperoned them on a gloomy, bunkerlike set before an audience of merely 1.5 million true believers.

McCain Says 'MoveOn.org Ought to be Thrown Out of This Country’

Republican anger continues to mount over MoveOn's disgraceful ad in Monday's New York Times that referred to "General Betray Us."

Thursday night, Sen. John McCain (R-Arizona) voiced one of the sharpes rebukes of the far-left organization since the ad was first published.

Speaking in front of a group in Hudson, New Hampshire, while holding a blown-up copy of the ad, McCain said (video available here, h/t Gateway Pundit): 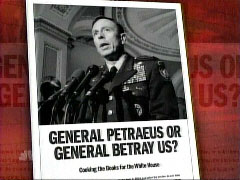 In his speech preview over lunch with television anchors and Sunday hosts, President George W.