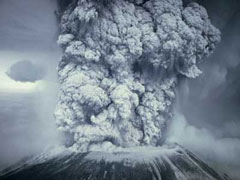 We have now reached the apex of "heads I win, tails you lose" global-warming alarmism. In his April 18 op-ed for the LA Times, author Eli Kintisch warned that "the world is running short on air pollution, and if we continue to cut back on smoke pouring forth from industrial smokestacks," global warming consequences could be "profound."

Having painted themselves into an environmental conundrum, Kintisch and climate scientists are left debating how they are going to proceed with sulfate aerosols - a natural and anthropogenic air pollutant believed to have cooling properties on the earth's atmosphere.

"Thanks to cooling by aerosols starting in the 1940s, however, the planet has only felt a portion of that greenhouse warming. In the 1980s, sulfate pollution dropped as Western nations enhanced pollution controls, and as a result, global warming accelerated," Kintisch wrote.

"There's hot debate over the size of what amounts to a cooling mask, but there's no question that it will diminish as industries continue to clean traditional pollutants from their smokestacks. Unlike CO2, which persists in the atmosphere for centuries, aerosols last for a week at most in the air. So cutting them would probably accelerate global warming rapidly."