"Conservatives say they pushed Dede Scozzafava out of the House race in New York's 23rd District a week ago because of her left-of-Republican social views - and not because she is a woman. But the growing schism between the Republican Party's ascendant right wing and its shrinking moderate core has clear gender undertones..."

So wrote Politico's Meredith Shiner and Glenn Thrush Monday in another attempt by a liberal media outlet to completely misrepresent what Scozzafava's ouster as Congressional candidate was really about.

Unfortunately on Monday, Politico didn't even try to be subtle with its attempt to fabricate sexism where it clearly doesn't exist (h/t Jennifer Rubin):

By Clay Waters | November 5, 2009 4:21 PM EST
Which party was "embarrassed" by Tuesday night's election results? You may be surprised.

In "Democrats in Congress See Election as Giving New Urgency to Their Agenda," New York Times congressional reporter Carl Hulse managed, as he often does, to tilt the conversation in a direction favorable to Democrats.

Thursday's story came in the aftermath of two big Republican wins in New Jersey and Virginia governors' races. Yet Hulse, echoing liberal wishful thinking, portrayed the special congressional race in upstate New York, where Douglas Hoffman, running on the Conservative ballot, came within a few points of beating the Democrat, as an "embarrassing loss."

Blaming election setbacks on a drop in voter enthusiasm, Congressional Democrats said Wednesday that losses in governors' races in Virginia and New Jersey -- and a striking House win in New York -- should give new urgency to their legislative agenda, including a sweeping health care overhaul.

As they assessed the results, Democratic lawmakers and party strategists said their judgment was that voters remained very uneasy about the economy and did not see Democrats producing on the health, energy and national security changes they promised when voters swept them to power only a year ago.

Republicans portrayed the election outcome as a repudiation of Democratic policies and predicted significant Congressional gains next year despite Tuesday's embarrassing loss in a longtime House Republican stronghold in upstate New York.

Dede Scozzafava's exit from a major campaign gave readers a perfect glimpse into the double standard applied by the media when it comes to women in politics.

The piece quoted three people sympathetic to moderates and a long quote from Scozzafava herself, but only one voice to speak for conservatives. Among the complaints was that conservatives targeted Scozzafava for being a woman instead of focusing on political issues.

Perhaps a report on Scozzafava's lipstick preferences would have been more substantive since that was counted as newsworthy on the World Newser blog just one year ago.

In covering Scozzafava, ABC got right to the point in the second sentence:

No Dems Among Hotline 'Losers'

Does the National Journal's Hotline inhabit the same universe as the rest of us?  Democrats lost two-out-of-three among last night's big races.  But in declaring Winners and Losers among non-candidates involved with the campaigns, the only Losers Hotline saw were . . . Republicans and conservatives, with nary a Dem in sight!

Chris Matthews was only too happy to seize on the Hotline hitlist during his Sideshow segment on this evening's Hardball.  Here were Hotline's three Losers:

By Clay Waters | November 4, 2009 3:57 PM EST
The G.O.P. had two big victories yesterday in off-year elections, winning the race for governor in New Jersey and Virginia for the first time since 1997. The New York Times's coverage was dominated by three themes used to explain away the success of Republicans:

The Republicans won by appearing moderate.

The congressional race in upstate New York revealed deep divisions within the G.O.P.

These off-year elections don't mean much anyway (except when Democrats win). 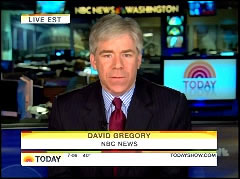 NBC's David Gregory, on Wednesday's Today show, downplayed the huge GOP wins in New Jersey and Virginia as merely reflecting the "anti-incumbency mood," and "the change message that Obama" started last year. Gregory, however, did play up Democrat Bill Owens' win over Conservative Party candidate Doug Hoffman in the New York 23 congressional race, and even more absurdly Bob McDonnell's win in Virginia as evidence that the Republican's path to victory is to go moderate, as the Meet the Press host postulated: "What's striking is you have the results in New York 23, which Democrats will hold up as a great result for them, but then you have McDonnell winning in Virginia, a purple state. He's a social conservative for his political career, yet he runs more as a pragmatist, as more of a centrist and look at the result. He wins big, wins big among independent voters."

The following is the full Gregory segment with Meredith Vieira as it was aired on the November 4, Today show: 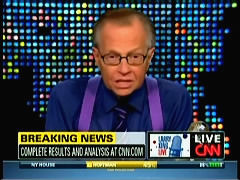 During a live midnight EST hour Larry King Live Tuesday night/Wednesday morning, CNN's Larry King repeatedly employed the “far right” pejorative to describe those who backed the unsuccessful New York congressional bid of the Conservative Party's Doug Hoffman. After Wolf Blitzer announced at 12:15 AM EST that CNN had declared Democrat Bill Owens the winner, King blurted: “That may be the first defeat for the far right tonight.”

About 15 minutes later, King pressed Amanda Carpenter of the Washington Times: “Since the far right did get into that race in upstate New York, is this a legitimate defeat for them tonight?”

And a few minutes after that, King forwarded the notion “the far right” is a “threat” to the GOP, asking Ben Stein: “Do you see the far right as evidenced by -- we all know who they are -- as a threat to your party?” 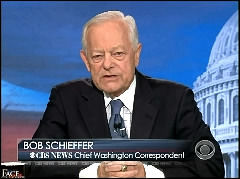 Shortly before the polls closed, CBS's chief Washington correspondent, Bob Schieffer, rejected any effort to tie President Barack Obama to two the Democratic gubernatorial candidates for whom Obama campaigned, insisting on Tuesday's CBS Evening News that the contests were more about local issues and so “I don't think they had much to do with anything but New Jersey and Virginia.”

Citing the special congressional race in New York, Schieffer rued “this third-party conservative who literally pushed a moderate Republican out of the race,” and proceeded to analogize Republicans this year to leftist activists who in 1972 pushed Democrats to pick an un-electable presidential candidate:

The Republican Party is really split and it is the conservatives who seem to have the juice right now. It's very much like what Democrats went through in 1972. The party activists on the left were so upset with mainstream candidates that in an effort to purify their party they pushed it so far to the left that they nominated the very liberal George McGovern for President. Now it's conservative Republicans who are upset with their mainstream candidates. They want to push the party to the right. 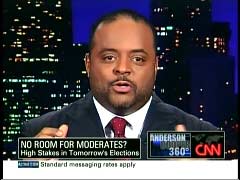 CNN’s Roland Martin picked up where Anderson Cooper left off on Monday’s AC360, claiming that there’s “the beginnings of a civil war” in the GOP and that Tea Party protesters “want to radicalize the right” in the party. Martin also claimed that the Democrats are more of a “big tent” than Republicans: “You have a Democratic Party that has no problem having liberal...moderate...and conservative Democrats.”

The liberal political contributor appeared with Tea Party Express’s Mark Williams for two segments starting three minutes into the 10 pm Eastern hour. Cooper first sought Martin’s take on the New York 23rd congressional district race. Unsurprisingly, he forwarded the Chris Matthews/mainstream media spin on the contest: “There is no doubt you are seeing the beginnings of a civil war play out, in terms of folks who are saying that we do not want moderates, in terms of being involved in this party.”

Later in the segment, after Williams highlighted how Republican candidate Dede Scozzafava endorsed Democrat Bill Owens after she withdrew from the New York 23 race, Martin struck back with his “big tent” claim about the Democrats: “You talk about endorsing a Democrat. I’m sure Mark has no problem with former Democrat Joe Lieberman saying he’s going to campaign for Republican candidates....You have a Democratic Party that has no problem having liberal Democrats, moderate Democrats, and conservative Democrats. What Republicans are saying is, we don’t want any liberal or moderate Republicans. We only want conservative Republicans, and you cannot expand a party nationally only having just conservative Republicans. You’re not going to win long-term.”

MSNBC Bizarrely Touts Special Election as a ‘Win-Win’ For Dems, Even if They Lose 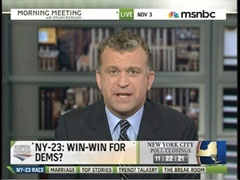 Is there nothing MSNBC can’t spin? A graphic on Tuesday’s Morning Meeting hopefully announced, "NY-23: Win-Win For Dems?" Apparently, even if Democrats lose the special congressional election in New York to Conservative Party candidate Doug Hoffman, it will just show how extreme the Republican Party has become.

In a not-exactly-balanced segment, host Dylan Ratigan talked to Representative and Democratic Congressional Campaign Committee Chairman Chris Van Hollen, liberal blogger Arianna Huffington and Professor Tom Schaller, who has written a book on how Democrats can win without the south.

The interview seemed very similar to one that appeared on Friday’s Situation Room on CNN. That program featured a graphic that read: "If The Dems Lose Next Week: How it might help them in the long run." And that followed an October 6 blog by ABC reporter Claire Shipman in which she speculated that President Obama losing Chicago’s Olympic bid was also a good thing:

Gibson Frets: 'Liberal Republican Gets Forced Out, What Happened to the Big Tent?' 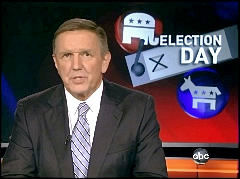 Following a Monday night look at Tuesday's special election to fill New York's 23rd congressional district seat in which Republican Dede Scozzafava dropped out after falling behind the Democrat and the Conservative Party nominee, ABC anchor Charles Gibson -- instead of wondering why the GOP establishment failed to pick a candidate who upholds basic Republican principles -- delivered the usual liberal media upset over the GOP's lack of a “big tent,” a phrase you never hear when Democrats pick left-wing candidates:

A liberal Republican gets forced out of the race by a more conservative guy who was actually not a Republican, was running on the Conservative ticket. What happened to the big tent in the Republican Party?

John Berman framed the preceding story on the “moderate” Scozzafava “who supports abortion rights and the President’s stimulus plan,” around the premise that going with a conservative candidate will hurt in the long run: “A Republican drops out of a race which might guarantee Republicans keep the seat, which might be bad for the Republican party long term.” Berman concluded with how the conservative candidate, Douglas Hoffman, “says not all views are welcome” as he suggested “there's always boundaries.” To which Berman intoned: “The question for Republicans is will those boundaries become a burden?”

The CNN political correspondent detailed the different key races up in the November 3 election at the top of the 5 pm Eastern hour, including the New Jersey and Virginia gubernatorial campaigns. She closed her report with the New York contest: “And by way of marquee races, it’s hard to beat the soap opera of New York’s 23rd congressional district, where the Republican moderate dropped out over the weekend, leaving the race to a conservative, Doug Hoffman, the choice of many on the right, including Sarah Palin, former House leader Dick Armey and ‘tea bag partyers.’”