The View’s Joy Behar did a masterful job of revealing her political ignorance when she grilled co-host Meghan McCain on why Republicans still support President Donald Trump, given his “treasonous behavior.” Behar was referring to Trump's friendly relationship with North Korean leader Kim Jong Un and his taking Kim at his word when Kim denied any responsibility for the imprisonment and torture of University of Virginia student Otto Warmbier, who died in 2017.

What Has Gotten Into the Democrats?

WASHINGTON — The average American is understandably perplexed as to why Senate Minority Leader Charles Schumer, House Minority Leader Nancy Pelosi and, of course, the runner up in last year's Democrat primaries, Sen. Bernie Saunders, are so lathered up over the Republicans' recent overtures to the Russians. They are calling for the impeachment of Attorney General Jeff Sessions.

The Federalist senior editor and 2015 Noel Sheppard Media Blogger of the Year Award recipient Mollie Heminway was at it again on Friday with a masterful takedown of the media for their double standard in mocking Mitt Romney’s warning about Russia in 2012 but expressing alarm in 2016 at Donald Trump’s infatuation with the oppressive country and their president in Vladimir Putin.

The Obama-loving media clearly weren't concerned by the President's open mic incident Monday when he told Russia's Dmitry Medvedev that he'll have "more flexibility" regarding a missile defense agreement after the elections.

Count NBC's Jay Leno in that camp as he told Republican presidential candidate Mitt Romney on the Tonight Show Tuesday, "That doesn’t seem that weird to me" (video follows with transcript and commentary):

CNN's Erin Burnett on Obama's Mic Gaffe: 'Better Than Being in the Bathroom With Your Open Microphone'

Without specifically mentioning fellow CNNer Kyra Phillips by name, Burnett hysterically said, "I guess it's better than being in the bathroom with your open microphone" (video follows with transcript and commentary): 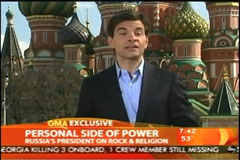 Good Morning America's George Stephanopoulos reported live from Russia on Monday and Tuesday and, despite devoting 32 minutes to interviewing the country's President and other officials, never once brought up the hundreds of journalists who have been died mysteriously in the country over the last 17 years.

On Monday, Stephanopoulos did challenge President Dmitry Medvedev on Iran, sanctions and other topics. But, on Tuesday, he conducted a softball interview, touting, "As a teenager, Medvedev saved for months to buy Pink Floyd's The Wall. You have a deep love of heavy metal. Where did that come from?"

He also parroted White House spin about Medvedev and Barack Obama: "...You can tell from my interviews with the two presidents that Barack Obama and Dmitry Medvedev like each other a lot. That may be because they're a lot alike." 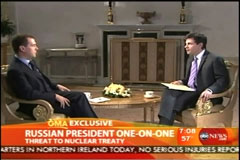 Good Morning America's George Stephanopoulos on Monday couldn't help but laugh at Russian President Dmitry Medvedev's obvious joke about George W. Bush. Stephanopoulos was in Russia to cover the signing on of a nuclear arms reduction treaty and offered this softball to Medvedev: "What do you make of Barack Obama, the man?"

The Russian President joked, "He's a very comfortable partner. It's very interesting to be with him. The most important thing that distinguishes him from many other people, I won't name anyone by name, he's a thinker. He thinks when he speaks." Not holding back, the former Democratic operative turned journalist laughed.

He then quipped, "You had somebody in your mind, I think." Medvedev added, "Obviously, I do have someone on my mind. I don't want to offend anyone."

'Nightly News' On Board with Putin's Business Bullying

During Tuesday night’s presidential debate, NBC’s Tim Russert tried to test the Democratic candidates’ basic knowledge of foreign policy, asking what they knew about the man who will almost certainly be elected president of Russia in Sunday’s elections. After Hillary Clinton gave a general answer that kept referring to “Putin’s handpicked successor,” Russert pounced: “Do you know his name?”

But if the fact that Dmitry Medvedev will assume the Russian presidency is actually important, Russert and his co-moderator, NBC Nightly News anchor Brian Williams, have utterly ignored it as journalists. A Nexis search shows just one reference to Medvedev on NBC, an April 14, 2007 story about Russia’s giant energy company, Gazprom, of which Medvedev was chairman of the board. (The story aired on a weekend, when Lester Holt, not Brian Williams, was in the anchor chair.)