For Dick Wolf’s FBI on CBS, the search for a bomber is not enough to be the main story. February 26’s episode, "Scorched Earth," focuses on the deeper meaning of women who get ahead in the workplace facing misogyny, which we're supposed to believe literally kills.

VIDEO 2018 Naughty and Nice List: The Best & Worst of the New TV Season

As Christmas approaches, we're making a list and checking it twice - find out which network tv shows have been naughty or nice.

On the October 9 episode of Dick Wolf’s FBI on CBS, “Prey,” FBI Special Agents Maggie Bell (Missy Peregrym) and Omar Adom ‘OA’ Zidan (Zeeko Zaki) are tasked with investigating the unsolved murders of 18 young women. The women are discovered to all have been victims of a sex trafficking ring still in operation, but, instead of just focusing on the plight of these victims, FBI chooses to flaunt the debunked “one in five women are sexually assaulted” figure, repeating it four times!

Look, the left wants you to believe that America is still a very racist country and that all manner of racial injustice and hate crimes are occuring like never before. And of course, Hollywood is here to reinforce that idea. NBC has just announced Law & Order: Hate Crimes.

While HBO’s “Newsroom” is surely today’s leading liberal fantasy news show, it is following in a format pioneered by the overwrought crime drama series “Law and Order” and its various clone shows.

The producers of “Law and Order: SVU” reminded everyone of that recently by actually writing and filming an episode in which a character based on Paula Deen kills a Trayvon Martin character.

"Law & Order," the popular courtroom drama that concluded its 20th and final season May 24, is a primetime TV legend. But the show that boasted its stories were "ripped from the headlines" often provided its viewers a distorted reality in which businesspeople were mostly portrayed as villains.

The Business & Media Institute examined "Law & Order," along with other television dramas' treatment of businessmen in 2005. BMI found that you were 21 times more likely to be kidnapped or killed by a businessman that a mobster.

Since 1990, the cop/attorney drama created by liberal Dick Wolf has covered a host of "bad" businesses from the company secretly testing roach poison on children and the greedy pharmaceutical execs selling a bad vaccine to the military to allegedly dirty defense contractors, landlords and medical device manufacturers.

In two out of three of its final episodes, the original "Law & Order" continued to demonize businessmen. One of those anti-business episodes villainized a bio-research firm, HemaLabs, for "stealing" DNA and blood samples from a family to create cancer treatment drugs. The company never compensated the impoverished family.

Managing Editor's Note: The following is a reprint of Michael Moriarty's original December 14 post to Big Hollywood. Moriarty, you may recall, played a prosecutor in the first few seasons of the long-running NBC drama "Law and Order."

Well, I think I’ve been fairly calm and forgiving of "Law and Order" for about fifteen years. Living outside of the U.S. has certainly helped in more ways than one. Out of sight, out of mind. "Law and Order" has, for years, been just a press of the remote away from non-existence.

However, recent events have "Law and Order" just begging for my reassessment. I hardly expected my old television series to be the clown act that leads the American viewing audience into an increasingly predictable pile of hard left propaganda. 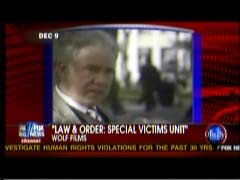 O’Reilly showed a clip of dialogue from the show in which left-wing lawyer Randall Carver -- played by John Larroquette -- made a comparison between a racist conservative talk show host character -- named Gordon Garrison -- and real-life conservative talk show hosts. Larroquette: "Garrison, Limbaugh, Beck, O'Reilly, all of them, they are like a cancer spreading ignorance and hate. I mean, they’ve convinced folks that immigrants are the problem, not corporations that fail to pay a living wage or a broken health care system."

Below is a transcript of the relevant portion of the Thursday, December 10, The O'Reilly Factor on FNC: