Halloween is traditionally a night of witches, ghosts, and monsters. But for environmentalists and their media allies, an even bigger scare is coming this Halloween: the birth of Earth's 7 billionth resident.

On Oct. 31, 2011, world population will reach 7 billion, according to the United Nations. For many people, this milestone is a cause for celebration and a human triumph. But for environmentalists on the radical left, the ever-growing legion of consuming humans is a harbinger of impending doom. The Washington Post cautioned that "ecological distortions are becoming more pronounced and widespread." Already the media are warning that population could more than double by 2100, according to a new UN report. 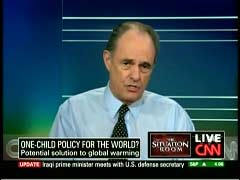 CNN’s Jack Cafferty all but endorsed a global version of China’s oppressive one-child policy on Friday’s Situation Room. He repeated the argument of Canadian journalist Diane Francis, that population control is the only way to fight global warming, and mentioned the opposition of “fundamentalist leaders” and others only in passing. All but one of the viewer e-mails that Cafferty read endorsed the idea.

The CNN commentator raised the population control issue eight minutes into the 4 pm Eastern hour during one of his “Cafferty File” segments. Though he didn’t give much of a hint as to his stance on the proposal at first, Cafferty made it much more clear after he read his “Question of the Hour:”

"The ‘inconvenient truth' overhanging the UN's Copenhagen conference is not that the climate is warming or cooling, but that humans are overpopulating the world," declared Canadian journalist Diane Francis in her Dec. 8 article titled "The Real Inconvenient Truth: The Whole World Needs to Adopt China's One-Child Policy."

Francis, an editor-at-large, published her article in Canada's national business newspaper, The Financial Post, the day after the much-hyped climate change conference kicked off in Copenhagen. She argued that "China, despite its dirty coal plants, is the world's leader in terms of fashioning policy to combat environmental degradation, thanks to its one-child-only edict."

"China has proven that birth restriction is smart policy," said Francis. "Its middle class grows, all its citizens have housing, health care, education and food, and the one out of five human beings who live there are not overpopulating the planet."

Francis wrote direly that there would be irreversible consequences unless "all countries drastically reduce their populations."