Three Pittsburgh, Pennsylvania, police officers were killed on Saturday, and according to prominent left-wing bloggers including the Atlantic's Andrew Sullivan and Markos Moulitsas of Daily Kos, it's because of conservative talk show hosts on radio and television.

Most frequently named as the culprit in such vitriolic postings was Fox News's Glenn Beck.

Such a disgusting conclusion stems from comments made to the press by friends of assailant Richard Poplawski as to why he might have carried out such a heinous act.

As the Associated Press reported Saturday: 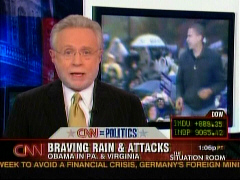 CNN practiced a more subtle form of bias during two reports in October by using its on-screen graphics. On October 14th's Newsroom program, a graphic accompanying a segment on Sarah and Todd Palin's connections to the Alaskan Independence Party proclaimed “The Palins and the Fringe.” On the other hand, a chyron from a report on Tuesday's Situation Room about Barack Obama making campaign stops in bad weather raved, “Braving Rain & Attacks: Obama in PA. and Virginia.”

The Situation Room led its 4 pm Eastern hour on Tuesday with reports on the day's campaign stops by John McCain, Sarah Palin, and Barack Obama. Host Wolf Blitzer introduced these reports by highlighting how “[a]ll three began the day in Pennsylvania, braving some pretty nasty weather and some bitter attacks.” Correspondent Dana Bash then detailed the Republican candidates' push in Pennsylvania, including how McCain had to cancel a rally due to rain. The graphic which accompanied Bash's report made no mention of the weather, but focused instead on the McCain campaign's emphasis on the tax issue: “McCain-Palin One-Two Punch: Hitting Obama On Taxes.”