The New York Times was in a panic in Saturday’s edition, with reporters Manny Fernandez and David Montgomery relaying Democratic whining about a GOP fundraising letter in “Texas Democrats Urge G.O.P. to ‘Eradicate’ Incendiary Rhetoric.” The Texas-based team of Fernandez and Montgomery have previously teamed up for freak-outs over the “far right,” “ultraconservative” Texas GOP, and they are still skittish about their fellow Texans: "Leaders of the Texas Democratic Party called the letter racist, anti-Latino and anti-immigrant and said it was filled with the kind of rhetoric that fueled the hatred of the El Paso gunman."

Five years ago, just weeks after Martin Baron took over as Executive Editor of The Washington Post, the newspaper canceled the position of Ombudsman, who brought reader concerns back to the news room. Every once in a while -- as in once a year or so, depending on who was serving -- the reader's advocate would address complaints of liberal bias. Now, the Washington Post Magazine is examining how their liberal articles aren't liberal enough

Frightened NYT: Texas Has ‘Shifted Further to the Far Right’

How "far right" can Texas go? The scare-mongering theme about “vanishing Republican moderates” is a popular myth at the Times and other liberal media outlets, especially in red states like Texas. The New York Times really went overboard with it Wednesday in “Bathroom Bill Tests the Clout of a Rare Moderate in Texas” by Manny Fernandez and David Montgomery. Fernandez, Houston bureau chief for the Times, is clearly not comfortable in what he has called “ultraconservative Texas.”

The new “Fusion” network, created by ABC and Univision, tried to brand itself as pro-protester by hosting an all-day protester summit in Washington on Wednesday. David Montgomery of The Washington Post sympathetically reported the program included “members of Pussy Riot, the Russian punk-feminist band, as well as organizers of demonstrations in Ferguson, Mo., and a leader of the Million Hoodies Movement for Justice.” Unsurprisingly, there were no Tea Party or pro-life protesters mentioned.

Fusion anchor Jorge Ramos strangely interviewed Obama’s U.N. Ambassador Samantha Power – strange because he had to know she would be, in turn, protested.

'Some Say' TX Gov. Rick Perry Had It Coming, as NY Times Desperately Tries to Keep Indictment in Play

The New York Times tried to keep the politicized hit job against Texas Gov. Rick Perry alive in Wednesday's edition, insisting the dubious partisan indictment (from a Democratic district attorney's office that has filed failed  charges against prominent national GOP figures) actually has merit, with a "complicated back story" and "deep roots," while pouting that Perry's team has had "substantial success in the court of public opinion" so far. No thanks to the overexcited Times coverage.

Reporter David Montgomery filed "Texas v. Perry Emerges From Years of Struggle Over Anticorruption Unit," a follow-up to his Tuesday print edition hit. (By contrast, the Washington Post has limited its recent Perry coverage to blogs and Associated Press briefs.)

The Washington Post typically boosted a leftist rally for amnesty for illegal immigrants, with one major difference – they utterly ignored the hypocrisy of the Obama administration and the National Park Service closing open spaces in Washington, unless a left-wing protest was scheduled.

The Post promoted the rally in a story on A-4 with three photographs and a story on the front page of the Style section on the protest’s musical stars Los Tigres Del Norte. This is the closest either story got to the smothered controversy:

The cover story of Sunday’s Washington Post magazine is a supportive profile of radical-left activist “mogul” Andy Shallal, who now owns a series of “Busboys and Poets” restaurants in the D.C area. He is best known recently for being the enthusiastic sponsor of Weather Underground bomber Bill Ayers in his D.C. appearance days after the 2008 election.

But the Post’s puffy title for Shallal on the cover was “Democracy’s Restaurateur.” Deep in the story you learn who gave him that title: Ralph Nader.

Who needs hard-hitting reporting on sanitation or nuisance issues related to Occupy D.C. when you can write up a puffy Style section front-pager on the protest music inspired by the leftist squatters?

On  the one-month anniversary of the initial Occupy Wall Street protest in Manhattan, Washington Post staff writer David Montgomery devoted a 1,092-word October 17 Style feature to examining how protest music is helping identify "deeper streams that seem to link disparate cultures of rebellion in the United States and other parts of the world."

No Anti-Capitalist Protest Is Too Small for the Washington Post

No anti-capitalist protest is too tiny for The Washington Post. Reporter David Montgomery reported that on early Saturday, eight people were arrested at a northwest Washington hotel while protesting a meeting of the World Bank and International Monetary Fund, one of them for "felony assault of a police officer." That was too tiny to make the Sunday newspaper.

But the mere plan of protests by this tiny band dominated the front page of Saturday's Style section, complete with a picture of more than 50 square inches and a huge headline: "Bank protest" in red letters and "No loss for words" in black. The caption promised "A series of demonstrations called 'Anticapitalathon' -- including a 5K run and a scavenger hunt -- will be held this weekend". They promised a full story on C-2 inside. The fun run was for destroying economic freedom: 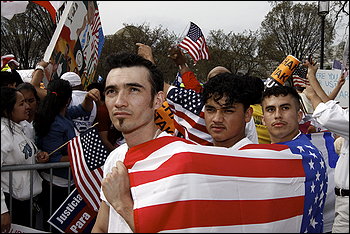 While its March 22 front page was exulting over House Democrats "scor[ing] a historic victory in the century-long battle to reform the nation's health-care system," the Washington Post's Style section ginned up a human interest story for another cause dear to many liberals: immigration "reform."

"Caught up in hope, but snared in a raid," blared staffer David Montgomery's headline. "Rally for immigration reform falls under shadow of arrests," the subheader for the 72-paragraph article lamented.

Arrests like those of Oved Vigil, Edwin Mazariegos and Esvin Blanco, who, Montgomery informed viewers in his lead paragraph, were VIPs at yesterday's March for America rally. The Post added its own VIP touch with a large photograph of the trio on page C9 (shown above at right), where the three young men stand posed with an American flag draped over their shoulders. The accompanying caption titled the photo "SHOWING THEIR COLORS" and quoted a rally speaker insisting, "We are not criminals.... We are workers here to push this country forward!"

Montgomery later went on to describe one immigrant who escaped detection at a workplace raid by hiding at the restaurant's walk-in refrigerator. The Post staffer closed the story by presenting the unnamed individual, still on the lam, as a decent guy in search of an honest living: