On Wednesday’s CBS Early Show, correspondent Daniel Sieberg reported on a young global warming activist from California: "...everyday citizens of all ages are doing their part to raise awareness of climate change....15-year-old Alec Loorz takes his message across the country, using poles to illustrate the predicted sea level rise if nothing is done to prevent global warning."

At one point, Loorz declared: "All of lower Manhattan would be underwater." That’s not the first time such a claim was made on the CBS morning news program. On November 5, 2007, Early Show co-host Harry Smith interviewed New York City Mayor Michael Bloomberg about a proposal to impose a national carbon tax and declared that "Manhattan will be underwater by 2050" if global warming was left unchecked.

On Wednesday, Sieberg went on to tout Loorz’s activism: "Alec’s voice also has the support of a former vice president. At the age of just 12, he applied to be part of Al Gore’s network of official speakers. It took some persistence, but eventually, Alec was accepted....And Alec’s cool factor certainly isn’t lost on his friends and family members."

CBS: Global Warming Increasing; ‘Vicious Cyle’ That ‘Must Be Broken’ 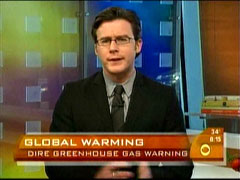 At the top of the 8AM hour of Monday’s CBS Early Show, co-host Harry Smith hyped a new report on Global Warming: "A dire new warning about global warming. Why is the world's climate heating up faster than scientists have predicted?" Co-host Maggie Rodriguez later introduced the segment with similar alarmism: "An alarming warning from scientists this morning. Global warming is happening much faster than expected."

Correspondent Daniel Sieberg reported: "Yes, a dire new warning from scientists says the amount of greenhouse gas emissions worldwide is higher than predicted...Scientists say those higher temperatures are fueling the intensity of wildfires, now raging in places like Australia." Sieberg concluded his report by exclaiming: "Now scientists say this global warming is part of a vicious cycle. Each changing ecosystem affecting the other and made worse by human activities. For environmentalists and many others, it's a cycle that needs to be broken. And soon. Maggie." Rodriguez remarked: "Tall order."

For the fourth straight weekday as Barack Obama vacations, he received better coverage on the broadcast network evening shows than the non-vacationing John McCain. Without fresh video of Obama, the CBS Evening News came up with a new way to tout Obama's campaign as they compared the Web sites of the two candidates and declared Obama's far superior. Reporter Daniel Sieberg asserted “McCain's Web site is still playing catch up to Obama's use of cyberspace.” Turning to “Web design expert Doug Jaeger,” Sieberg echoed Joe Biden in applying the term “clean” to Obama as he highlighted how “Jaeger describes Obama's site as clean; and McCain's as cluttered.” Jaeger complained about JohnMcCain.com: “He's using lots of different typefaces at all different sizes which gives you a feeling of chaos.”

Sieberg soon trumpeted how on BarackObama.com “kids have their own special area, including a logo to color,” while the dour McCain “offers a game called Pork Invaders on his Facebook page,” but if you do well, Sieberg sarcastically noted, “you're rewarded [pause] with a statement about pork-barrel politics.” Withe the contrasting numbers on screen, the CBS reporter also championed Obama's transcendence on social networks which are largely only used by younger people:

The Obama campaign may hope the Internet will do for Obama what television did for John F. Kennedy in 1960. Just compare the candidate's popularity on the social networking sites Facebook and MySpace. While both campaigns hope their supporters spread the word, Obama is "friended" almost seven times more than McCain.

In a rare case of balance, Wednesday’s CBS "Early Show" highlighted both sides in the debate over declaring the polar bear an endangered species due to global warming as correspondent Daniel Sieberg declared: "They're at the top of the food chain at the top of the world, but their future is at the center of a political tug-of-war over drilling for oil versus protecting their habitat."

Sieberg began his report with a dire prediction: "There are an estimated 20,000 - 25,000 polar bears in the Arctic region, but environmentalists warn that rising temperatures and disappearing sea ice will cause a 30 percent decline in their population over the next 50 years." He also played clips of liberal California Senator Barbara Boxer and John Kostyack from the National Wildlife Federation.

However, Sieberg also provided perspective from the Heritage Foundation: