Of course, in another cozy exchange between liberal elites, Pfieffer is buying the swanky condo from a senior correspondent and associate editor at the Post:

Crowley to Obama Advisor: 'Why Didn't the President Just Say, Yeah, Benghazi Was a Terrorist Attack?'

Do you remember Candy Crowley back in October, while acting as a presidential debate moderator, defending Barack Obama's claim that he had called the attack on our consulate in Benghazi, Libya, an act of terror the day after the attack?

Crowley apparently doesn't, for on CNN's State of the Union Sunday, she actually challenged Obama advisor Dan Pfeiffer about this asking, "Why didn't the president just say, yeah, it was a terrorist attack?" (video follows with transcript and commentary):

Schieffer to Obama Advisor: ‘Why Are You Here? Why Isn’t the White House Chief of Staff Here?’

As NewsBusters reported two weeks ago, CBS’s Bob Schieffer is fed up with the White House’s talking points concerning what happened at our consulate in Benghazi, Libya, last September.

His impatience continued on Sunday's Face the Nation when Obama senior advisor Dan Pfeiffer gave stock answers to questions about the three crises facing the President leading Schieffer to first accuse his guest of taking "exactly the approach that the Nixon administration took" and finally scolding him by asking, "Why are you here today? Why isn't the White House Chief of Staff here to tell us what happened?" (video follows with transcript and commentary):

There was a lousy jobs report from the Labor Department last Friday that has led some people to fear the already soft economic recovery might be slowing down.

Despite this, ABC's George Stephanopoulos, during a lengthy This Week interview with Barack Obama senior adviser Dan Pfeiffer Sunday, didn't ask one single question about that report or the state of the economy.

Charles Krauthammer received a rare apology yesterday from the Obama White House after the president’s press shop had called him out in a mistaken “fact check” of one of the syndicated writer’s recent columns.

In a posting on the official White House blog yesterday evening, Obama communications director Dan Pfeiffer blamed “internal confusion” for an earlier posting in which he denounced Krauthammer for spreading a “rumor that’s so patently false” that Obama had returned to the UK a bust of its former prime minister Winston Churchill upon assuming office.

In a Wednesday interview with the White House communications director, CNN's Piers Morgan gushed over President Obama's "extraordinary" demeanor and praised Obama as "confident" and "assured."

"Does he know something we don't? Or is he just quite cool under pressure?" Morgan slobbered to Dan Pfeiffer. 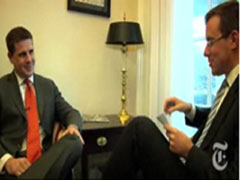 During a Monday video interview with the New York Times’ The Caucus blog, the new White House communications director Dan Pfeiffer, joined his predecessor Anita Dunn in declaring that Fox News Channel is not a news organization: “I have the same view of Fox that Anita had, which is that Fox is not a traditional news organization.”

Responding to a question by Times reporter Jeff Zeleny about Dunn’s feud with Fox, Pfeiffer explained: “They [FNC] have a point of view. That point of view pervades the entire network both the opinion shows, like Glenn Beck and Bill O'Reilly, but also through the newscasts during the day.” He went on to add: “We don’t feel an obligation to treat them like we would treat a CNN or an ABC or an NBC or a traditional news organization. But there are times when it would make sense to communicate with them and appear on the network.”

MediaBistro.com’s TVNewser obtained a response from Fox News to Pfeiffer’s comments: “Obviously new to his position, Dan seems to be intent upon repeating the mistakes of his predecessor... and we all remember how well that turned out.”

Well, it's not quite as bad as Paul Krugman critiquing the Fox Business Network, but a little troubling because tax dollars are being spent to undertake such an effort.

"In today's Washington Post, Charles Krauthammer takes great pains to paint a bleak picture of health care reform as ‘monstrous,' ‘overregulated,' and rife with ‘arbitrary bureaucratic inventions,'" Pfeiffer wrote. "The columnist's argument may be cogent and well-written, but it is wholly inaccurate."