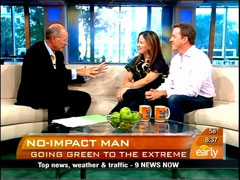 On Monday’s CBS Early Show, co-host Harry Smith promoted a new book and documentary about a New York City couple that spent a year without modern amenities, such as toilet paper and electricity, to limit their impact on the environment: “This is an amazing saga....when the lights were switched back on, Colin and Michelle clearly saw a year that meant so much more than living without toilet paper.”

Smith asked Colin and Michelle Beavan what their “inspiration” was, to which Colin replied: “Concern for the planet. I mean, we were reading so much about global warming happening and we were just frustrated because what can any one person do? So we thought we’d try to do what we could.” Michelle added: “I had just seen the movie An Inconvenient Truth, so that really – it was kind of perfect timing.”

In response to the Beavan’s only eating fresh unpackaged food, Smith saw the logic: “the cost of what the wheat is in a box of cereal that costs $4? It’s a couple of pennies, you know, versus all of this stuff that’s around it. So there’s – there’s some sense in all of this.” Near the end of the segment, Colin again cited global warming hysteria: “And we discovered that, you know, there is a climate emergency happening and it is possible for us as citizens to actually take care.” Smith agreed: “You just have to get 300 million people to do it.” 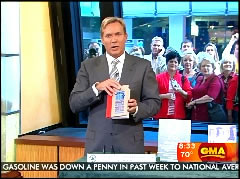 Weatherman/global warming alarmist Sam Champion on Tuesday again promoted the cause of toilet paper-avoiding environmentalist Colin Beavan. In his brief "Just One Thing" segment, Champion touted books made on recycled paper and cheered that the tome No Impact Man is made on 100 percent recycled paper.

The weather man marveled, "And when [Beavan] was with us, he kind of shared the idea that not only did he do an entire year of living, trying to make no impact on the environment, but he thought he would carry it through with his book." Champion has aggressively promoted Beavan, who went a year without toilet paper, cars and electricity in an attempt to be carbon neutral.

The environmentalist has made three appearances on GMA in the last two years to promote his experiment, which eventually became a book and a movie. And in this segment, as when Beavan last appeared on September 3, 2009, Champion made no mention of the bizarre decision to forgo bathroom amenities. 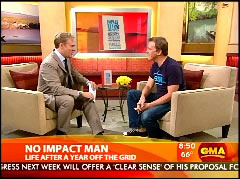 On Thursday’s Good Morning America, for the third time in two years, Sam Champion interviewed an extreme environmentalist who shunned toilet paper for a year as part of a project to be carbon neutral. Colin Beavan, also known as "No Impact Man," appeared on the show to promote a new documentary and book on his experience. This time, however, Champion downplayed the bizarre elements of Beavan’s life.

The host made no mention of the fact that, in addition to not using amenities such as elevators, cars and electricity, Beavan also stopped partaking in the practice of using toilet paper. (This aspect was noted on ABCNews.com.) Champion did refer to the project as a "year-long experiment in living extreme green." But, the ABC weatherman skipped any discussion of the left-wing nature of Beavan's life. The full title of the environmentalist’s book is "No Impact Man: The Adventures of a Guilty Liberal Who Attempts to Save the Planet, and the Discoveries He Makes About Himself and Our Way of Life in the Process." [Emphasis added] (The book title did appear briefly as an on-screen graphic.)

ABC, Brought to You by Honda, Says Don't Buy Stuff

Left wing environmentalist Sam Champion continued to push his eco-agenda on Friday's edition of "Good Morning America." The liberal weatherman enlisted the help of IdealBite.com, a web page devoted to "green living." One of the site's founders, Heather Stephenson, lectured a family interested in going green about the evils of buying new toys for their children. She explained, "'Cause the best thing that you can do for the environment, actually, is not buy more stuff."

The goal was to help the couple "get their green on." And while some of the suggestions were sensible, others sounded rather socialist. After encouraging a neighborhood "toy swap" as an alternative to new toys, the other founder of Ideal Bite, Jennifer Boulden, touted old jewelry. "And that's the best thing you do, in terms of eco, is not have to buy new. People don't think about the fact that when they're wearing new jewelry, it is from the Earth. It has to be mined," she hectored. Isn't this more than a little hypocritical on the part of GMA? After the segment ended, commercials appeared advertising a new Disney movie, Amtrak, the newest cars from Hyundai and Honda. Wouldn't it be best to watch an old Disney movie and not encourage the making of new ones? Shouldn't eco-Americans simply buy used cars and not patronize Honda and Hyundai?

In Spring of 2007, magazines such as Vanity Fair and Elle offered readers ways to "green" their lives and help the environment. Now, the April issue of Glamour brings readers another "57 Little Ways to Save the Planet."

Announcing "Mother Earth needs our help," the article begins by accusing "we use too much fuel (which causes pollution), chop down too many trees, conserve too little water; toss too much waste into landfills."

Glamour tells readers it has consulted its "panel of experts" and come up with the best small ways to fight "these major problems." Of course, Glamour's "panel of experts" is comprised mostly of members of radical left-wing environmental groups such as the Sierra Club, Natural Resources Defense Council, and the Center for Science in the Public Interest.