MSNBC efforts to link conservatives to Nevada rancher Cliven Bundy continued on Wednesday, May 7, as All In host Chris Hayes suggested that endorsing Tea Party candidates was "basically one step away from endorsing Cliven Bundy." [See video below.]

On Monday's Starting Point, the host seriously challenged her Tea Party guest, former Republican senatorial candidate Christine O'Donnell, when she had the nerve to say the President's policies were Marxist (video follows with transcript and commentary):

Behar Guest Mills-Francis: O'Donnell 'Was Whore By Her Own Admission' 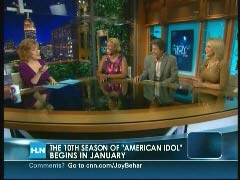 On Wednesday’s Joy Behar Show on HLN, when a panel discussion turned to the subject of Delaware Republican Senate nominee Christine O’Donnell, panel member Judge Karen Mills-Francis of the Judge Karen’s Court show described O’Donnell as having been a "whore" as she listed some of the Senate candidate's past and recent problems. Mills-Francis: "She’s a real train wreck, and the reason why she said that is, I mean, have you looked at this woman’s resume? She was a whore by her own admission. She was an alcoholic. She owed her college $5,000 for 10 years – they had to sue her. The IRS levied an $11,000 tax lien against her. I mean, do I need to go on?"

Below is a transcript of the relevant portion of the segment from the Wednesday, September 22, Joy Behar Show on HLN: