Barbara J. King of the College of William and Mary bizarrely asserted that a "person's sex can be socially constructed" in a Thursday item for NPR.org's "13.7" blog. King used the rare phenomenon of hermaphroditism to justify Chastity Bono's "transformation" to become "Chaz" Bono, and lamented that the "the case of Chaz Bono tells us that enormous unease still exists in our society when individuals celebrate, rather than hide, that transformation."

The biological anthropologist started her piece, "Sex, Gender And Dancing With Chaz Bono," by going so far to refute the standard left-leaning view on sexuality: "A person's sex is unambiguous. As a result of biology, we're born either male or female. A person's gender, by contrast, is a matter of social construction. If we're born female, we may choose to act in ways considered in our society to be masculine — or vice versa. This dichotomy between sex and gender is often asserted as fact, and may seem like common sense. But it's flat wrong. A person's sex can be socially constructed." 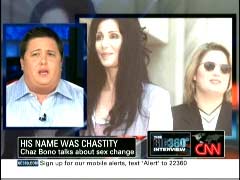 CNN went into full tilt in promoting its upcoming pro-gender "reassignment" documentary "Her Name Was Steven" with Anderson Cooper's interview of Chastity "Chaz" Bono, the daughter of Sonny Bono and Cher, on his AC360 program on Thursday. Cooper very sympathetically interviewed Bono, and threw softball questions, even going so far as to ask, "How do you like shaving?"

The anchor heralded the "extraordinary transformation" of his guest at the top of the 10 pm Eastern hour, and noted that "in a rare interview, he [Bono] talks about life as a man and the journey he's still undergoing." Prior to the first segment of the interview at the bottom of the hour, Cooper aired a report from CNN's Gary Tuchman on "how Chastity became Chaz." The correspondent confused the English language to the point of referring to Bono with a male possessive pronoun at the beginning of a sentence, and then referring Bono as "she" within the same breath.

By Carolyn Plocher | November 19, 2009 12:11 PM EST
Leave it to ABC and its obsession with alternate sexuality to characterize being a male or a female as a "difficult decision." Introducing an interview featuring Chastity (now Chaz) Bono on Nov. 19, "Good Morning America's" Diane Sawyer said, "There can be no decision that you make that is more complex and difficult than gender identification."

Bono explained the hardships of undergoing a sexual "transformation" and the "journey into manhood" to an extraordinarily sympathetic Chris Cuomo, saying, "Gender is between your ears, not between your legs."

This interview only adds to a long list that details ABC's fascination with the sexually bizarre. In July 2009, CMI released a study that found that ABC news programs had featured 76 segments about sexual activity in the past six months. Most of the reports related to political sex scandals or crime cases that contained a sexual element, but 11 promoted alternative sexual arrangements, such as gender changes and, even more disturbing, objectum sexualization - having romantic relationships with objects like F-15 fighter jets and the Eiffel Tower.