If today's gun control debate seems a bit stale to you, you're not wrong. Twelve years ago, MRC's Geoffrey Dickens wrote a Special Report on network coverage of gun controversies over a two-year period from July 1997 to June 1999.

ABC, CBS, and NBC harped on several major themes in their coverage of gun policy stories. The arguments most commonly advanced by the network stars had one thought in common: guns are the problem. Check out just how similar yesterday's complaints were to today's:

The Democratic National Committee has released a new video to push back against protests happening at town hall meetings across the country, and according to ABC's Jake Tapper, these demonstrators are being depicted as "irrational birthers who want to 'destroy' President Obama."

For those unfamiliar with the term, "birthers" are folks that question whether Barack Obama is a U.S. citizen.

Tapper also reported that the ad claims these protests are being staged by "desperate Republicans and their well funded allies [who are] organizing angry mobs -- just like they did during the election."

DNC video along with more of Tapper's report below the fold:

ABC News' Friday special, "Over a Barrel: The Truth About Oil," was reviewed by David Almasi, one of my colleagues at the National Center for Public Policy Research.  He found so much bias in the special, I knew his review would be of interest to Newsbusters readers:

Last Friday, July 24, ABC News aired the special "Over a Barrel: The Truth About Oil."  It might have been more correctly titled "Charlie Gibson Hates the Oil Companies."

ABC News newsreader Charlie Gibson interviewed 18 people during the course of the program.  Seven were gas station owners, refinery workers and the like - people who were there to specifically deliver raw information about the operations of the oil industry.  When it came to the 11 people featured for their political insight, it was obvious Gibson only really wanted to hear one viewpoint.

All Three Nets To Interview Obama About Healthcare Wednesday

President Obama's healthcare initiative is currently in a lot of trouble on Capitol Hill as legislators grapple with finding money -- amidst staggering budget deficits and a declining economy -- to fund the new program.

As a result, on Wednesday, the news divisions of all three broadcast networks have decided to come to Obama's rescue, and on the very same evening, air interviews with the President concerning this issue.

It's good to be a Democrat president the press are in love with, isn't it?

How ABC Stacked the Deck for Obama

With the very first question of its prime time special, Questions for the President: Prescription for America, ABC set the tone that essentially confirmed for viewers that the president was right in his desire to radically remake America's healthcare system. As the infomercial began, "moderator" Charles Gibson asked a seminal question of the doctors and other participants that were about to hear the president speak: "How many of you agree with the president that we need to change our healthcare system?" Naturally they all raised their hands.

Imagine that? This handpicked crowd all agreed with ABC and Obama that "change" was paramount. Surprised? Hardly.

So, as the viewer is introduced to the infomercial, they start off with the unanimous affirmation that the president is right, radical changes have to be made. The premise is set and even the sharp questions to the president later in the show are blunted by the assumption that some major change is needed. And since the president is the only person allowed to offer any plan during this ABC special, the further assumption promulgated is that he is the one that must affect that change.

For viewers of this healthcare infomercial, Obama wins thanks to an assist by ABC. The viewer is deftly led to the desired conclusion.

Big 3 Nets' Evening News: It's Summertime, and the Viewers Are Leaving

Media Bistro broke it Tuesday morning, and gave us all of the details shortly after noon. The news: CBS and ABC's evening newscasts both came in with record low viewerships during the week of June 15.

ABC's fall to less than 6.5 million total viewers is probably more of a surprise than CBS's plunge below 5 million. Is there a health care propaganda backlash?

But the biggest news, as usual, is the combined audience drop, this time to barely 19 million. As usual, Media Bistro didn't note that.

Here's a chart comparing the overall and 25-54 demographic audiences during the week of June 15, 2009 to those of the previous week, January 26, 2009 (a combined high-water mark during the first week after Barack Obama's inauguration) and June 16, 2008: 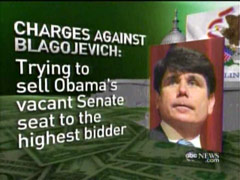 The three broadcast networks started their evening newscasts on Tuesday with stories on Illinois Governor Rod Blagojevich's arrest and corruption charges. All of the newscasts mentioned Blagojevich's Democratic affiliation, but only in passing. And, only ABC's World News questioned the details about the Illinois Governor's relationship with President-elect Barack Obama, while NBC and CBS brushed over the President-elect's connections with Blagojevich and seemed content to end their investigation of this relationship by reporting on Obama's statement that he was not aware of what was going on.

ABC and NBC both identified Blagojevich as a Democrat early in their reports. NBC "Nightly News" anchor Brian Williams's introduction to the report by Lee Cowan described the charge as "that the two-term Democratic governor tried to sell a seat in the US Senate to the highest bidder." Brian Ross, reporting for ABC's "World News," identified the Illinois governor as "the boyish looking Democrat branded a greedy, foul mouth politician who tried to sell a US Senate seat to the highest bidder."

The CBS "Evening News," however, did not identify Blagojevich as a Democrat until the very end of Dean Reynolds's report when an on-screen graphic identified the governor as "(D) Illinois" and Reynolds claimed that "fellow Democrats worry that whoever he might pick could wind up tainted politically and could ultimately cost the party a valuable seat in Congress."

An unsigned article on CNN.com about Sarah Palin’s rally in Johnstown, Pennsylvania on Saturday failed to mention the Alaska governor’s attack on Barack Obama’s votes against the Illinois Born-Alive Infant Protection Act, and quickly tried the change the subject to the recent "Troopergate" finding against her after its first sentence: "Alaska Gov. Sarah Palin charged into the culture wars Saturday in Pennsylvania, painting Sen. Barack Obama as a radical on abortion rights. The stop comes amid news that Palin violated Alaska ethics law by trying to get her former brother-in-law fired from the state police, a state investigator's report for the bipartisan Legislative Council concluded Friday."

The CNN article then continued about the apparent divisiveness of the abortion issue: "Ethics woes aside, Palin focused her attention on abortion -- an issue that rallies the conservative base but some say alienates independent and women voters." After quoting from some of the governor’s comments at the rally, the anonymous writer tried to spin the significance of her bringing up the issue: "Palin has mostly avoided raising her opposition to abortion rights on the campaign trail since she was tapped as Sen. John McCain's running mate, a fact she readily acknowledged in her remarks. But Palin said Obama's record on the matter is too extreme to be ignored, and she spent 10 minutes of her 30-minute speech discussing abortion."

So, instead of merely reporting the news, now reporters are the news? Apparently Charlie Gibson thinks he is, anyway. He gave an interview to the Toledo Blade on October 5 as if his opinions of the race for the White House are somehow more important than the news of the candidates. You remember the candidates, don't you Chuck? You know, those guys who are actually going to be elected, the ones that you are supposed to be reporting on?

Gibson spoke to the Toledo Blade's TV beat reporter Kirk Baird about an upcoming visit to Ohio's Bowling Green State University and he said a few pretty revealing things to the Blade about how the media are treating the campaign.

Like many of his ilk, he appears in this interview to show a disdain for small town America, he obviously pretends not to see any bias among his comrades, he excuses that bias he does see and interestingly he claimed it was the duty of the media to "expose" Sarah Palin -- an interesting choice of words, for sure.

Did ABC & Gibson Use Camera Trickery To Belittle Gov. Palin?

Did ABC use particular camera tricks to make Governor Palin look small and powerless in their Charlie Gibson interview? I've been pointed to a blog that makes a compelling case that they did just that. Using still shots of the Gibson interview with Palin compared to similar Gibson interviews with Barack Obama and Hillary Clinton, it seems this blogger has proven it to be an open and shut case of manipulation of the viewer. The writer shows how ABC used special camera placements and lenses to make Governor Palin seem small and Charlie Gibson seem overpowering and large by comparison.

By now, just about everyone is aware of Hollywood's special effects and camera techniques. There have been so many TV shows explaining them, so many DVD extras laying out the techniques that most Americans are at least a little familiar with the effects and techniques that filmmakers use to heighten and enhance their work. The anonymous blogger is familiar with these special effects, claims to work in the business in Hollywood himself, and does a great job explaining and pointing out where such effects were used to belittle Governor Palin.

Dontcha ya hate it when Old Media outlets beat up on other Old Media outlets? (Well, maybe you don't hate it, exactly) It's like Old Media on Old Media violence. In this case we have the United Press International (UPI), struggling lesser known news wire service, giving the big smack-a-roo to ABC. UPI is warning that Charlie Gibson's gruff handling of Governor Sarah Palin may "backfire," and that the interview revealed a "double standard" of harsh treatment for Republicans compared to the softballs they've thrown to Democrats in past interviews.

Who can disagree with that assessment?

UPI's Martin Sieff's one sentence assessment of the interview seems to be the general consensus of all dispassionate observers. "There were no surprises, no knockout zingers," Sieff says, "but also no bloopers Thursday night in Alaska Gov. Sarah Palin's first TV interview since becoming the Republican vice presidential nominee."

Hubris was indeed revealed in the ABC interview with Sarah Palin, and it wasn't coming from Sarah Palin, but Charlie Gibson. But there was more than Charlie's sneering condescending tone, looking down over the rim of his glasses like some snobby intellectual that bothered me. Twisting her words into a fabrication feeding the fear of theocracy was utterly insulting. It was especially insulting to claim that these were her "exact words" after being challenged on it.