Political anaylst Charlie Cook bills himself as "non-partisan and independent." But on today's Morning Joe Cook  couldn't curb his enthusiasm for Chris Christie.  Cook said of Christie that there is "testosterone coming out of every more pore in his body" and that Christie's attitude "inoculates him against being called a RINO, pantywaist liberal Republican."

For good measure, Cook said he would "pay money" to see Christie reach down the throat and pull the lungs out of Tea Party member daring to call Christie a liberal!  View the video after the jump.

Bozell Column: Who's Burning Down D.C.?

The political prognosticator Charlie Cook appeared on National Public Radio on July 11 and summarized perfectly the media narrative on the debt-limit battle. Boehner, Cook said, “is not a burn-the-barn-down, break-the-china kind of guy [and] he does not necessarily reflect the views of a majority...of the House Republican Conference, who are of the burn-the-barn-down, break-the-china mold.”

Hold on here. Why is it destructive to insist on a limited government? Why is fiscal sanity equated with pyromania? Cook was brought on as a “nonpartisan” analyst, but there’s nothing either civil or accurate in casting conservatives as barn-burners. 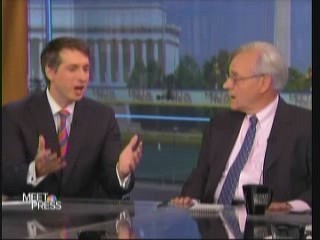 National Review's Rich Lowry on Sunday had a classic debate with Washington Post columnist E.J. Dionne about whether or not the tax cuts implemented by former President George W. Bush should be allowed to expire.

Dionne agrees with President Obama that they should only be extended for folks making less than $250,000 a year; Lowry thinks that raising anyone's taxes right now could send the country back into recession.

With this in mind, NBC's David Gregory opened the panel segment of "Meet the Press" with a discussion about the current state of the economy and how this issue might impact the upcoming midterm elections.

As he tossed the baton to Lowry and Dionne, one got the feeling Gregory was intentionally lighting a fuse he knew would result in some entertaining fireworks (videos follow with transcripts and commentary):

Today on "Hardball," host Chris Matthews sought to portray President Barack Obama as being on the rebound from a beating in his approval rating during "all the crazy stuff of the summer" such as "the tea parties, the birthers, the nutbags out there" who drove up Obama's disapproval numbers.

But the single poll he cited was dismissed as an outlier by guests Charlie Cook of Cook Political Report fame. John Harris of The Politico also agreed with Cook's assessment.

Video is embedded after the page break (audio available here): 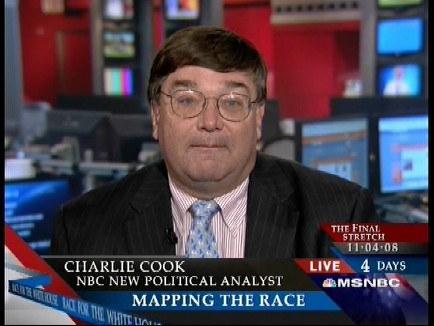 Political analyst Charlie Cook sells himself as "independent, nonpartisan" pundit, but then how does it look when he’s donating his time and talent to a fundraising auction for Netroots Nation, the hard-left blogger convention? He’s offering "Coffee with Charlie Cook and a 1-Year Subscription to the Cook Report."

Charlie Cook: Another Out of Touch Liberal

You know when a liberal has lost any capability to understand the common American when they completely miss the pain that liberal tax hikers cause the average citizen in this country. Charlie Cook recently showed this elitist attitude in a National Journal column on the outrageous costs of the Cap and Trade bill – better called the Cap and Tax bill. Of course, to him, the tax hike on the average American is not a big deal and he doesn’t understand how anyone could be upset over it all.

Cook is perplexed why Washington pols were “getting an earful” from constituents over the energy tax hikes that the Cap and Trade bill will force on the nation. He just couldn’t figure why adding “only” an additional $175 a year to the average citizen’s electric bill was such a big deal.

If Team McCain needed some "bulletin-board material"—the kind of outrageous taunt from the opposition a coach will pin up in the locker-room to inspire his troops—they got if from Charlie Cook tonight.  So confident is the pollster of an Obama victory, he's proclaimed that if McCain wins, he'll go to work bagging groceries or behind a fast-food counter.

Cook was a guest on this evening's Race for the White House.  It was in looking at the Electoral College map with host David Gregory that he made his super-sized pledge.