Tonight with his interview of former South Carolina Republican Congressman Bob Inglis, MSNBC's Hardball host Chris Matthews worked a trifecta of Matthewsian tropes into one segment: adulation of all things Kennedy, bashing the GOP as "anti-science," and praising a renegade Republican for taking a liberal position on a policy issue, in this case a so-called carbon tax.

Chris Matthews: Do Republicans Oppose Obama Because of His Race? 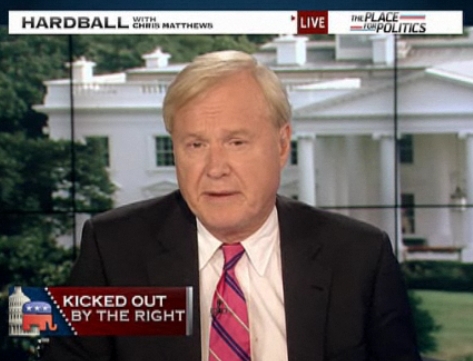 Chris Matthews on Friday actually asked a GOP Congressman if Republicans oppose President Obama because of his race.

On the 5PM installment of MSNBC's "Hardball," Matthews brought on Rep. Bob Inglis, the Congressman from South Carolina who easily lost his primary fight in June to Tea Party candidate Trey Gowdy and has been badmouthing his Party ever since.

Fixated on racial conspiracy theories, the "Hardball" host later in the interview asked, "If we had about a million Heidi Klums trying to cross the border, the Mexican border of the United States, you know, the gorgeous blond from Germany or whatever, do you think that would be a problem with immigration right now, or is it really just ethnic?" (video follows with partial transcript and commentary):

By Matthew Balan | August 5, 2010 10:28 PM EDT
CNN anchor Rick Sanchez revisited his vendetta against Fox News, Glenn Beck, and Rush Limbaugh on Thursday's Rick's List. Sanchez brought on outgoing Representative Bob Inglis, who lost a primary challenge to a Tea Party-backed Republican candidate, and when he harped about "flamethrowers" on TV and radio, the anchor pressed him on whether he meant the two radio hosts and his network's competitor [audio clips available here].

Sanchez interviewed Rep. Inglis just before the top of the 4 pm Eastern hour. He introduced the politician by emphasizing the South Carolina Republican's overall conservative record and his recent defeat in the primary: "My next guest is a conservative firebrand. He is a veteran conservative congressman. In fact, he's maintained a 93 percent conservative voting record....Pro-choice liberals have called him a 'zero.'...He was a Ronald Reagan Republican, if there ever one was, and suddenly, he wakes up one day, and he simply is not conservative enough, not for South Carolina Republicans. He lost the recent primary. No- he got killed in the recent primary, 29-71 [percent]."

However, what the CNN anchor left out is how Inglis was one of the few House Republicans who voted for a 2007 Democratic-sponsored resolution opposing the troop surge in Iraq, and has criticized skeptics of man-made global warming, as well as opposed offshore drilling. Most prominently, he voted for the 2008 bailout of the financial system. The Republican's primary opponent used these votes and stances to defeat him.

Perplexed Matthews: How Can South Carolina GOPers Vote for Indian-American But Not Support a Black President?

Chris Matthews, on Wednesday's Hardball, invited on recently defeated Republican Representative Bob Inglis to slam Matthews' favorite targets, namely the Tea Party, Rush Limbaugh and Sarah Palin and after he got the requisite criticisms out of the South Carolina congressman of those entities asked him if he could explain how primary voters from his own party could nominate an Indian-American like Nikki Haley, even though they've "got a problem with a black president?" Matthews, clearly not grasping the concept that perhaps voters in South Carolina could cast their ballot based out of purely ideological and not racial motives, asked Inglis the following question:

How do you figure your state out? It's pretty conservative obviously. It's Strom Thurmond country in many ways and, and it has people like DeMint pretty far over and then people like Lindsey Graham who are sort of regular conservatives. But then you nominated, your party has nominated an Indian-American woman, Nikki Haley. Obviously an attractive candidate, she knows how to present herself obviously, but what's that about? Is that just an interesting little aspect? "It's okay to be Indian-American but we got a problem with this black president?" What's that about? [audio available here]

Before Matthews ended his show on that stumper of a question, he egged on the soon to be former Representative Inglis to attack the Tea Party, Limbaugh and Palin, as seen in the following exchanges that were aired on the July 14 Hardball:

For AP, Heated Conservative Rhetoric Is 'Poisonous,' But Obama's 'Sharp Tone Is Justified'

The Associated Press gave voice to a Repuiblican Congressman today to bemoan what he sees as "poisonous 'demagoguery'" from the usual suspects, including, by the AP's own account, Sarah Palin and Glenn Beck.

Rep. Bob Inglis, R-S.C., who lost in a primary for the GOP nomination last month, went so far as to claim that heated political rhetoric is "dividing the country into partisan camps that really look a lot like Shia and Sunni." The AP did not feel the need to qualify this absurd statement (and it is absurd, given that a few years ago Sunni and Shia tribes in Iraq were "systematically trying to assassinate moderates").

And while the AP now feels the need to unquestionably parrot claims that conservatives are dividing the nation into potentially murderous political sects, just last year it ran an article headlined "Obama spokesman says sharp tone is justified." By the AP's unquestioning accounts, heated conservative rhetoric is dangerous, but heated liberal rhetoric is necceary for the health of the nation.

The media would like folks to believe that only Democrats are hearing it from constituents at town hall meetings this August, but given what happened to Rep. Bob Inglis (R-SC) Thursday evening, nothing could be further from the truth.

As he spoke to a group of 350 citizens at the Upstate Family Resource Center in Boiling Springs, he asked an outspoken attendee why she was afraid of Barack Obama.

Someone in the crowd suggested the Congressman watch Glenn Beck. Inglis replied, "Turn that television off when he comes on."

This was not well-received by folks who started loudly booing their Representative as many stood up and left the building.

Inglis tried to stop the bleeding by saying the following (video embedded below the fold):