A spokesman for the Rev. Jesse Jackson on Thursday denied a claim from a man who says he was fired from the civil rights leader’s Rainbow PUSH Coalition because he is gay.

Tommy R. Bennett filed a complaint with the city of Chicago’s Commission on Human Relations last year, alleging Jackson fired him unjustly and that the civil rights leader forced him to perform “uncomfortable” tasks, including escorting various women to hotel rooms to meet Jackson for sex.

The piece ended noting that a gay publication, The Windy City Times, had reported Bennett's allegations earlier in the week.  The Windy City Times story included more salacious details, such as the complainant's charge that Jackson directed him to apply cream to a rash between Jackson's legs; the minister told Bennett about one of his high school instructors, a gay man, who served as Jackson's teacher with benefits; and Bennett's allegation that Jackson wanted to have sex with the Rainbow Coalition employee. 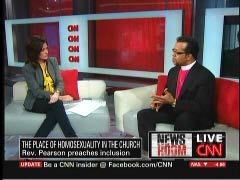 CNN's Kyra Phillips gave a ringing endorsement to a Christian minister and his heterodox views on homosexuality on Monday's Newsroom. Phillips interviewed televangelist Bishop Carlton Pearson, who, in her words, went "out on a limb...[to] say gays are accepted in heaven," and concluded the segment by stating how she "respect[s] very much" what he preached on the highly-debated moral issue.

The anchor led the 10 am Eastern hour with the allegations against Bishop Eddie Long, who has been sued by four young men so far who accuse him of coercing them into sexual relationships. Four minutes into the hour, Phillips introduced Pearson as a "pioneering black televangelist and a close friend of Eddie Long's...[who] lost a lot of his flock when he began preaching that everyone has a place in heaven, including gay people." She first asked the bishop, "Why did you go out on a limb and say gays are accepted in heaven, something that the black church disagrees with?"

Pearson lauded his "gay friends" as "some of the most sensitive, loving, creative, ingenious, generous people" and touted how he "started preaching the Gospel of inclusion" and criticized how supposedly "the devotion to the devil and hell is stronger, or as strong as anybody's devotion to Jesus in many of the Christian circles." After spending some time discussing what Pearson knew of Long, Phillips posited what would happen if the accused minister came out as a homosexual: "What if he does come forward, Bishop, and say, I told you I wasn't a perfect man and I've been- I have been struggling with this issue, and he does say that he's gay. What if this story changes? How will you deal with that? Will you accept him? Will you embrace him? How would you counsel him as his friend?" 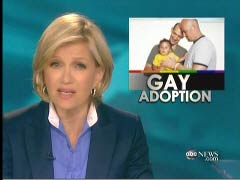 On Wednesday’s World News on ABC, anchor Diane Sawyer briefly reported on a court ruling in Florida which struck down a state law banning the adoption of children by homosexual couples. Ignoring the issue of whether an activist court should make such a ruling, Sawyer seemed to frame the story from a sympathetic point of view for would-be same-sex parents in Florida as she referred to the ruling as "new hope" for such couples. Sawyer: "And there is new hope tonight for gay people in Florida who want to adopt a child. A state appeals court ruled that the 33-year-old ban on gay adoption is unconstitutional. And the governor said that the state will allow the adoptions immediately."

But, while ABC News programs have a history of advocating gay rights, it is ironic that the story was immediately followed by a full report about Bishop Eddie Long, a Georgia pastor accused of pushing teenage boys into homosexual sex. Sawyer set up the report: "And trouble is mounting tonight for the pastor of a 25,000-member mega church near Atlanta. Bishop Eddie Long, who lives a lavish lifestyle and has denounced homosexuality, is accused of coercing three young men into relationships. Steve Osunsami has details of the lawsuits."

Below is a transcript of the relevant portion of the Wednesday, September 22, World News on ABC: 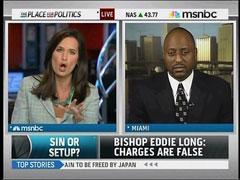 While discussing sex allegations against Bishop Eddie Long on Friday, MSNBC host and gay rights activist Contessa Brewer asked Bishop James Dean Adams: "Long has taken a very strong anti-homosexual stand....Is there always a danger, if you're taking that sort of stand, that you're living in a glass house and people are going to be encouraged to throw stones?"

Brewer described how "the Southern Poverty Law Center calls Bishop Eddie Long 'one of the most virulently homophobic black leaders in the religiously based anti-gay moment. Long reportedly told his congregation about homosexuals, he said, God says you deserve death.'" The left-wing organization spliced together that comment and other clips of Long's Sermons on its website.

Brewer used Long's comments to go after Bishop Adams: "I mean, you can't support that, do you? The saying that homosexuals deserve death?" Adams replied: "No. I don't say that homosexuals or anybody, for that matter, deserves death." Brewer continued: "Do you think, in any way, Bishop, this will change the way black churches deal with the issue of homosexuality?" Adams explained: "I disagree with the viewpoint that the church is somehow been purposefully anti-gay. It's not about anti-gay. It's just simply anti-sin."

On Tuesday, Brewer warned of "consequences" for senators who opposed the repeal of 'Don't Ask, Don't Tell." In addition to her frequent on-air advocacy for gay rights issues, Brewer was the featured speaker at a Kentucky LGBT fundraiser in July.