The total inability of the far-left Fox News haters to conjure up any real controversy about the cable channel demonstrates just how reasonable and measured Fox's coverage generally is.

The occasion for the latest bout of anti-FNC bloviating was the leak of an email from Sammon, sent during the height of the so-called Climategate scandal. It read:

New Yorker’s Remnick: ‘Palin’s Career Would Be Eliminated’ If ‘Preposterousness Were Disqualifying’ 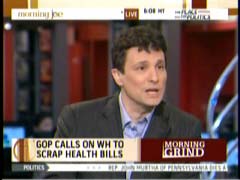 On Tuesday’s Morning Joe on MSNBC, on the same show in which host Joe Scarborough had earlier complained about FNC’s Bill Sammon claiming that the media "hate" Sarah Palin, guest David Remnick of the New Yorker magazine -- formerly of the Washington Post--  declared that "Sarah Palin’s entire career would be eliminated" if Americans were influenced by seeing "preposterousness" on public display. Remnick’s comment came during a discussion of the Senate’s adherence to the filibuster rule that makes it easier for the minority party to block the passage of legislation. At about 8:09 a.m., Scarborough contended that he would prefer that filibuster participants be required to actually stand up and speak in televised debate so that Americans might see the "preposterousness" of the practice.

Remnick then took his shot at Palin to dismiss Scarborough’s theory that "preposterousness" could wake up the American public. Remnick: "We see a lot of preposterous things in American politics. That doesn’t seem to convince us otherwise. Sarah Palin’s entire career would be eliminated, would pass out of history if preposterousness were somehow disqualifying, but it’s not."

Below is a transcript of the relevant exchange from the Tuesday, February 9, Morning Joe on MSNBC: 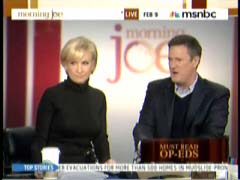 On Tuesday’s Morning Joe, MSNBC host Joe Scarborough took exception with FNC analyst Bill Sammon for using the word "hate" to describe mainstream media sentiment toward Sarah Palin, contending that "you can't just say that people ‘hate’ Sarah Palin." But, while he spent more than two minutes complaining about Sammon’s use of the word "hate," Scarborough seemed to contradict himself at one point as he ended up using the word "hated" to describe media reaction to the former Alaska governor after she was first chosen as John McCain’s running mate.

The MSNBC host went on to suggest that the media got over their initial feeling of "hate" and "tried" to "start reporting on her down the middle." Scarborough: "And, by the way, we called out the media when they attacked her without even knowing who she was. And we said they hated her in the press early on without knowing her because she was a pro-life woman. Now, did they get past that and start reporting on her down the middle? They tried. But again, they don't hate her. I don't think they under-, a lot of people don't understand somebody from Wasilla who hunts, who is pro-life. There is a cultural gap. But to just say that they hate..."

Below is a transcript of the relevant portion of the Tuesday, February 9, Morning Joe on MSNBC, with critical portions in bold:

Fox News has a business strategy of seeking to "undermine" the MSM by alleging that it has a liberal bias.   That was Chuck Todd's assertion on Morning Joe today.

UPDATE (below the fold): Calderone responds to us in electronic print.

The Politico's Michael Calderone on Sunday wrote the following headline and first paragraph. With what would appear to have been a straight face.

It may be time for Calderone to move off the media beat. He clearly hasn't been paying attention to major details of a major story for nearly a year.

I would offer he could be moved to Obituaries, but that too would entail coverage of the "MSM."

How has Calderone missed completely the now nearly ubiquitous presence of the sexually-explicit, derogatory term used by members of the "MSM" to describe the participants in said Movement? The in-person attacks on Party participants by the likes of CNN's Susan Roesgen (now no longer with the firm)? The over-arching denigrating words and deeds by people throughout the "MSM?"

There is so much "MSM" anti-TEA Party venom to substantiate Sammon's assertion, one hardly knows where to begin. So we will simply list, with links and dates, documentation aplenty below.

We hope Calderone avails himself hereof, and repents. In writing. Today. 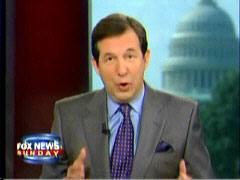 Near the end of Sunday's show, Wallace read from the first paragraph from each obituary, with the Kennedy version tagging the liberal Senator as "a son of one of the most storied families in American politics, a man who knew acclaim and tragedy in near equal measure, and who will be remembered as one of the most effective lawmakers in the history of the Senate."

By contrast, the Helms version omitted such positive causes as his legislative fight against the tyranny of communism, and instead portrayed his Senate career in a negative light, referring to him as the "Senator with the courtly manner and mossy drawl, who turned his hard-edged conservatism against civil rights, gay rights, foreign aid and modern art."

Below is a transcript of the relevant portion of the August 30, Fox News Sunday:

UPDATE: video added at end of post with footage of the Portland protest.

As Obama-loving media continue their assault on town hall meeting protesters, they seem to have forgotten how they covered civil disobedience when George W. Bush was in the White House.

As Fox News's Bill Sammon pointed out Wednesday, when former President Bush was greeted by hostile protesters on a fund raising trip to Portland, Oregon, in August 2002, the news media didn't bother sharing with the public some of the truly incendiary signs in the crowd or the vulgar behavior of the attendees.

In fact, some of the television reports at the time painted the protesters as innocent victims of an overly aggressive police force.

Before we get there, here's Sammon's take (h/t NB reader ShruggedAtlas and Michelle Malkin):

Biden's Latest Whoppers on Meetings With Bush: Something You'll Likely Only See Or Read at Fox

That Joe Biden and the truth have been distant acquaintances from time to time was recently seen in March (at NewsBusters; at BizzyBlog) when the Vice President claimed that Louisiana was losing 400 jobs a day. Louisiana at the time was actually gaining jobs.

The math-challenged Biden, who infamously said during the presidential campaign that the word “jobs” has three letters, is now making claims that he had face-to-face meetings with President Bush which aides and others don't recall or have a record of. Not surprisingly, Biden's narrative concerning these alleged meetings is meant to demonstrate what an influential truth-to-power guy he is.

Bill Sammon of Fox News has the story, which is a virtual lock not to make it into the established alphabet TV networks or into what's left of the establishment's newspapers: 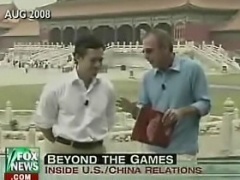 Chinese divers won a record seven gold medals during the 2008 Olympics.  But even they didn't leap as headlong into the Beijing tank as did NBC.  That's how you might describe the collective verdict of the Fox News Watch panel this evening on NBC's regime-friendly coverage.  The subject arose as part of the show's Year in Review, and began with a clip of Matt Lauer unctuously questioning a ChiCom official:

MATT LAUER: There's a recent poll that said some very high percentage of the people in China are happy with their lot in life. Something around 80%.  You compare that with the polls in the United States that say only about 25% of Americans are.  What's the root of their happiness here?

View video here. The panel lit into the network's coverage, with even the liberal-leaning Jane Hall and Kirsten Powers joining the NBC-scorching consensus. 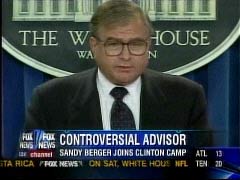