As NewsBusters routinely reports, one of the tricks the liberal media employs to discredit conservatives is to seek opinions from supposedly right-leaning commentators who are really nothing more than Republicans In Name Only often sharing much the same views espoused by the left.

One such "conservative" media darling is ABC political contributor Matthew Dowd who on Sunday's This Week said, "If I were people, I wouldn't be taking political advice from Bill Kristol who selected Sarah Palin as one of his leading figures in the national Republican Party, which was obviously a disaster in 2008" (video follows with transcript and commentary):

Maher: ‘Everything in the Weekly Standard Is a Lie Told to an Idiot’

As NewsBusters readers are well aware, Bill Maher is not someone that should be casting aspersions on other people’s intellects.

Despite this, the host of HBO’s Real Time Friday said of the conservative magazine the Weekly Standard, “Everything in it is a lie told to an idiot” (video follows with commentary):

Oh to have been a fly on the wall for this one.

In the wake of Al Gore's Current TV being sold to Al Jazeera, the Islamist world's equivalent of MSNBC, Geraldo Rivera was reminded of Gore's holier-than-thou attitude the last time they met. (audio clip after page break)

Politico Disparages Heritage as 'Uninspiring' & Discredits DeMint as a 'Fighter, Not a Thinker'

Jim DeMint (R-S.C.) announced Thursday that he will be trading his Senate seat in January to assume the helm of the Heritage Foundation. Covering the surprising development in its Friday edition, Politico dismissed DeMint as a mediocre politician with an undistinguished record who is moving on to captain a conservative think tank that has become "predictable, uninspiring, and often lacking in influence."

Manu Raju and Scott Wong mocked DeMint's lack of credentials in their front-page story titled, "DeMint Departure Fallout." They described him as a popular senator who has actually "accomplished very little" in Congress because he "wasn't a legislator" and having "no signature laws to his name." Of course, this betrays an inside-the-Beltway way of thinking about success in Congress. Conservatives dedicated to shrinking the size and scope of the federal government are not going to be be known for legislative accomplishments, which more often than not are about expanding the federal government's size and scope, not dismantling old bureaucracies.

The Weekly Standard's Bill Kristol gave a rather sobering view of American foreign policy and the state of geopolitics this weekend.

Three comments that caught my attention on the Sunday morning interview shows:

> ABC News White House reporter Jake Tapper recounted that whenever he has dinner with liberal friends “you can hear them making their peace with Romney,” saying “‘he seems centrist,’ or ‘you know, he’d be good at jobs,’” so “that's a problem for President Obama.”

> On the killing of terrorist Anwar al-Awlaki, a U.S. citizen, liberal Washington Post columnist E.J. Dionne Jr. admitted: “You’ve got to be honest and say, what would liberals say if George Bush had done this?”

Possibly feeling the question was a bit over the top, the Weekly Standard's Bill Kristol during the panel discussion segment of "Fox News Sunday" ribbed the host saying, "You can call me a flake if you want" (video follows with transcript and commentary):

Fox News haters love to advance the myth that the network pushes exclusively conservative views and the anchors surround themselves with right-leaning yes men who never question them.

On the latest installment of "Fox News Sunday," liberal political analyst Juan Williams challenged host Chris Wallace's view of the public's support for the war in Afghanistan leading to a humorous exchange (video follows with transcript and commentary):

Bill Kristol: 'Two Biggest Speculators That Have Damaged The Economy Are Obama and Bernanke'

As oil and gas prices head to new highs, we're hearing more calls from the President and his media minions about how this is all the fault of Wall Street investors.

On Tuesday, the "Hardball" host proved Armey's point by calling Sarah Palin "a cuckoo clock" and Newt Gingrich "a mortal enemy to our civilization" (video follows with transcript and commentary):

“This is such a weak field,” Fox News analyst Juan Williams, recently ousted from NPR for not fully toting the far-left line, declared during a Fox News Sunday discussion of potential 2012 Republican presidential candidates, prompting an appalled Bill Kristol to mock: “Yeah, President Obama had done so much when he ran for President. I mean, all of these guys are better qualified than Barack Obama.”

Williams got in the last words of the December 26 segment, using them to deride Sarah Palin compared to Barack Obama:

There is nobody out there except for Sarah Palin who could absolutely dominate the stage and she can't stand on the intellectual stage with Obama.

That caused oohs from the panel and led host Chris Wallace to suggest “there’ll be a lump of coal” in Williams’ stocking. (Audio: MP3 clip) 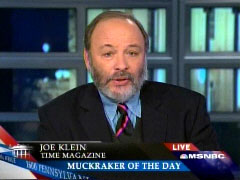 Time magazine's Joe Klein yesterday did what he does best: take one paragraph from a neoconservative's column and blow it out of proportion and out of context in order to go on an extended screed bashing conservatives in general and neocons in particular.

Klein started off with a backhanded compliment:

Well, it's good to learn that there are limits to Bill Kristol's tactical skeevery. He clearly states here that Barack Obama is not a Muslim. No winks, no nods, no gratuitous McConnellesque "If he says he's not, that's okay with me."

With that out of the way, Klein dove into his screed: