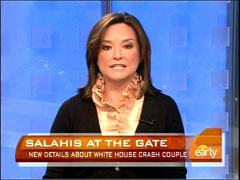 On Wednesday’s CBS Early Show, correspondent Bianca Solorzano reported on the couple who snuck into the White House state dinner, but avoided fully explaining the role a Pentagon official played in the scandal. She claimed emails between Pentagon liaison Michele Jones and Michaele and Tareq Salahi: “actually undermine their claims that they were invited...”

Solorzano quoted one email in which Jones told the Salahis that “it doesn’t seem likely” she could get them an invitation to the event and that she “then left the Salahi’s a voice mail before the dinner, saying they did not get an invitation.”

However, Solorzano failed to cite later emails in which Jones reacted to the Salahis getting into the dinner. After getting home from the White House gala, Tareq Salahi sent an email thanking Jones for her help: “Hi Michele, You are an Angel!....it worked out at the end. We ended up going to the gate to check in at 6:30pm just to check, in case it got approved since we didn’t know, and our name was indeed on the list! ☺ We are very grateful and God bless you.” Jones replied back: “Tareq, You are most welcome! I here the smile in your email and am delighted that you and Michaele had a wonderful time.” 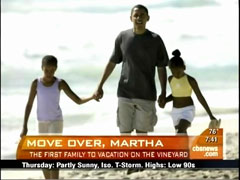 Taking a break from President Obama’s failing health care plan or the Henry Gates controversy, at the top of Wednesday’s CBS Early Show, co-host Maggie Rodriguez focused on a more important story: "And move over, Martha. The First Family chooses a popular celebrity retreat for their vacation. We'll tell you where the President will tee off."

Rodriguez later introduced the segment by declaring: "President Obama and his family have chosen a well-known and classic locale for their summer vacation next month, Martha's Vineyard. An exclusive island off the coast of Massachusetts." Correspondent Bianca Solorzano then reported: "It’s an island retreat, beloved by the Kennedys, the Clintons, the late Walter Cronkite, and soon, the Obamas." A clip was played of Julia Wells, editor of the island’s Vineyard Gazette newspaper, who gushed: "There’s an electric excitement about it all."

Solorzano described the luxurious accommodations the Obama family would be treated to: "...the First Family will stay at Blue Heron Farm. The 28-acre, $20 million enclave is located in Chilmark. The farm suits Obama to a ‘tee’ with golf facilities, a pool, basketball court, private beach, and a rental price tag of up to $50,000 a week." The report failed to feature any criticism of such a costly presidential vacation in tough economic times. 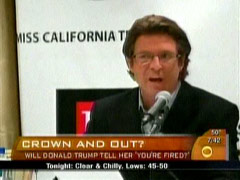 At the top of Tuesday’s CBS Early Show, co-host Harry Smith declared: "Oops, she did it again. More semi-nude photos of Miss California surface. So will Donald Trump be forced to say, 'you're fired'?" Later, co-host Julie Chen teased the upcoming segment by exclaiming: "Well, up next, more semi-nude photos of Miss California leak onto the internet. So will Donald Trump end her reign today?"

Correspondent Bianca Solorzano reported on Trump’s awaited decision: "Even more semi-nude photos of Carrie Prejean surfaced overnight, adding fuel to a fire that's been building for days. The controversy kicked off when Prejean opposed gay marriage at the Miss USA pageant. In a radio interview, Prejean said the question tested her faith...But there were other temptations. Breast implants paid for by the pageant. And racy photos. Still, Prejean remains the poster girl for conservative causes." A clip was played of an TV ad from the National Organization for Marriage that featured Prejean.

Solorzano went on to explain: "Monday, the directors of the state pageant were clearly angry with Prejean." A clip was played of Miss California USA Co-executive Director Keith Lewis taking a shot at Prejean and the "conservative causes" she has been a part of: "Up until now, we have just been riding along pretty much a passenger on this runaway train. But as of today, that ends...Shame, shame, shame. Shame for taking this young woman and exploiting her to further your own agenda." 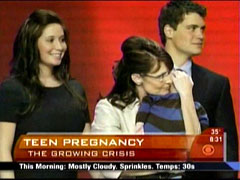 In the final half hour of Thursday’s CBS Early Show, correspondent Bianca Solorzano reported on an increase in the teen pregnancy rate, using Bristol Palin as an example: "Teen pregnancy was on the RNC platform this year, literally, as Sarah Palin's 18-year-old daughter, Bristol, was about to give birth. Jamie Lynne Spears made headlines at 16, not for her acting, but the grown-up, real-life role of becoming a teen mom. These famous faces front a growing problem." A graphic appeared on screen declaring: "Teen Pregnancy: The Growing Crisis."

Later, Solorzano explained: "After more than a decade of progress, experts fear we've been lulled into a false sense of security. And have stopped pouring resources into prevention." A clip of the movie ‘Juno’ was then played, after which Solorzano exclaimed: "And unlike the comedy 'Juno,' there's nothing funny about the nation's growing number of teenage mothers."

In preparation for Michelle Obama’s speech at the Democratic convention, Monday’s CBS Early Show continued it’s fawning over the wife of the presidential candidate as co-host Harry Smith declared: "Michelle Obama steps out tonight to address the nation. Is she Barack's best asset?" The show featured three segments on Michelle Obama, two of which were complete fluff.

In the first segment, Bianca Solorzano looked at five things that people might not know about Michelle Obama: "Michelle Obama is known for her fashion-forward style, but when it comes to her style of eating, she likes good old-fashioned comfort food. We asked close friend and family confidant Valerie Jarrett to give us the inside scoop, beginning with Michelle's favorite food." Jarrett replied: "Oh, that's easy, French fries." Jarrett is of course an Obama campaign worker, in addition to being a "family confidant." It was also revealed that Michelle Obama exercises daily, her favorite singer is Stevie Wonder, and she watched the ‘Dick Van Dyke Show’ as a child. In June, the Early Show did a similar segment on Barack Obama and informed viewers that he "loves to play scrabble" but "does not like ice cream."

Solorzano went on to highlight how outspoken Michelle Obama is: "Another thing close to Michelle's heart -- honest views." A clip was played of Obama appearing on ABC’s The View claiming that: "People aren't used to strong women."

On Monday’s "Early Show," co-host Harry Smith highlighted Barack Obama’s birthday, but wondered: "So is he feeling older faster as a result of the campaign trail?" Correspondent Bianca Solorzano later reported on Obama turing 47 and having endured a long campaign: "Barack Obama has been campaigning for president for 18 months...It was just four years ago that the relatively unknown Illinois Senator burst onto the political stage at the 2004 Democratic national convention. Now the 47-year-old has been campaigning around the clock and around the world."

Clips of Obama noting his age were played throughout the segment: "I'm getting gray hair. Running for president will age you quick." On that note, Solorzano even talked to Obama’s barber who commented: "Yeah, his hair is a little bit, but you know that's normal for his age group. You know, not too much gray, just a little bit." The meaning behind all this emphasis on Obama getting older soon became evident as political analyst Jeff Greenfield observed: "I think probably a little more gray, a little more wrinkles, probably isn't such a bad thing for somebody who's running for president."

The morning after CNN and MSNBC began salivating over a potential “Imus moment” pushed by a far-left group to suppress Bill O'Reilly over a supposedly racist remark, CBS and NBC on Wednesday advanced the liberal group's cause with multi-part segments on the topic. But while NBC's Today at least provided some balance and proper labeling, CBS's Early Show, with “In Hot Water” and “O'Race Factor” on screen, aired a story which failed to identify the ideology of Media Matters and followed with Julie Chen pressing the only guest to agree O'Reilly's comment was racist and that he must issue an apology. Amazingly, neither show bothered to mention that Juan Williams, the black journalist who was on O'Reilly's radio show when the FNC host made the remarks in question, defended O'Reilly: “It had nothing to do with racist ranting by anybody except these idiots at CNN.”

Harry Smith teased Wednesday's Early Show: “Bill O'Reilly in hot water over race remarks. The controversy ahead, early this Wednesday morning, September 26th, 2007.” Chen hyped a “firestorm” over O'Reilly before reporter Bianca Solorzano innocuously described Media Matters as a “watchdog group.” Solorzano asked an employee at the Harlem restaurant O'Reilly talked about: “Do you feel Bill O'Reilly's comments about his meal here are racist?” The woman affirmed: “Definitely. One of the worst stereotypes ever of our customers, of our people.” Chen next interviewed Alex David of the National Black Chamber of Commerce. She pressed him: “You say ignorance, but do you think racist?” Chen also urged him to agree: “Does he need to apologize at this point, do you think?”

CBS: Rising and Falling Home Prices Bad for the Economy

No matter what the housing market does – whether it trends upward or trends downward – either way, it is bad for economy.

That’s the CBS take on the economy anyway. “The prices of homes are falling and there is more evidence tonight that those counting on their houses as their nest eggs may be in trouble,” said Russ Mitchell on the August 26 “Evening News.”