VIDEO ABC’s ‘Madoff’ Exposes the Incompetence of the Federal Government

Madoff was a very well done, 4-hour television event. Telling the story of, obviously, Bernie Madoff and his $50 billion dollar Ponzi scheme, it had a very “Goodfellas” feel to it, complete with good use of flashbacks and music.

Media May Have Played a Role in Madoff Scandal, Says CNBC Contributor

Is it possible the financial media played a role in facilitating the alleged $50 billion Bernard Madoff Ponzi scheme? An interesting theory by Jon Najarian, CNBC analyst and cofounder of optionMONSTER, contends that they very well may have unwittingly done just that. Madoff, he believes, used media publicity to lure investors to his scheme.

As Najarian explained on CNBC's Dec. 22 "Fast Money," Madoff got his reputation on Wall Street in the payment for order flow business. That's when a brokerage firm receives a payment as compensation for directing the order to the different parties that can execute the order at a lower cost.

"First of all you needed something that was very credible, because what he started off with was very credible," Najarian said. "As we both know, Dylan, he was in the payment for order flow business before anybody else. That meant folks that he was buying on the bid and selling on the offer back when the spread on NASDAQ stocks was 50 cents wide."

Trump On Madoff Mess: Millionaires of the World, Unite! 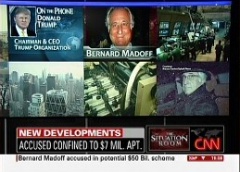 Poor schlumps out there know how to get along with next to nothing.  But these were multi-millionaires that Bernard Madoff wiped out: show some sympathy!  That was The Donald's daffy drift in speaking to Wolf Blitzer on this afternoon's Situation Room on CNN.

DONALD TRUMP: They put 100% of their money with this character, this sleazebag.  100% and they're wiped out. And you know, it's one thing when you grow up and you don't have money or you get to a certain age and you don't: you learn to live. [But] these people have had hundreds of millions of dollars and one phone call on a Thursday night: they're wiped out, have nothing left.

The wires services and the rest of the Old Media have also been reporting on a scandal that doesn't have to do with Illinois Governor, Rod Blagojevich. But, like the Blago story line, the media seem to be forgetting one small aspect of the story of Wall Street rip off artist Bernard Madoff. Like Blago, Madoff's connections to the Democrat Party seem to be of little interest to the media.

Very few media stories of the fraud perpetrated by former Nasdaq chairman Madoff mentions the heavy financial support that Madoff has donated to the Democrat Party. Campaign contributions by Madoff show many thousands of dollars going to Democrat candidates and causes. Including $100,000 to the Democratic Senatorial Campaign, thousands to Charles Rangel (D, NY), Charles Schumer (D, NY), and $6,000 to the Securities Industry and Financial Markets Association. Madoff also gave generously to Senator Frank Lautenberg (D, NJ) who runs a charitable foundation that invested with Madoff.