On Tuesday night, NBC Nightly News concluded its program by pushing an over four-minute-long fawning segment on Hollywood actor and activist Ben Affleck that included banter between anchor Brian Williams and Affleck on New York and Boston sports teams, gushing over Affleck’s life and “restless mind,” and his disappointment about the United States “nation-building elsewhere” when it should be doing that in places like Detroit.

Williams’s coverage of Affleck came as the show refused to cover the growing protests for greater democratic rule in Hong Kong and any news regarding the midterm elections, which are five weeks away from Tuesday.

In an interview with Ben Affleck on Monday's NBC Today, co-host Matt Lauer observed that the actor's new murder mystery thriller Gone Girl was "a little hostile to the institution of the media." Affleck agreed but reassured Lauer: "Yeah, it's not media broadly. It's not you guys or The New York Times or even the news. It's about that stripe of media that's the sort of the cable, 24-hour, 'Who killed somebody today?,' you know, kind of hustle."

Affleck – who plays a husband suspected of murdering his wife amid a media frenzy in the film – listed various real-life murder cases the press became obsessed with: "...Scott Peterson or Laci Peterson or whatever, Amanda Knox, or that girl whose daughter died. You know, whatever horrible thing happens, there's somebody kind of really sanctimonious running a show twenty four hours a day trying to make money off of it..." Of course NBC was saturated with sensational coverage of all of those stories as well.

Ben Affleck, an actor who himself admitted that he was “not a Congo expert” was given star treatment on Sunday’s This Week w/ George Stephanopoulos. Earlier this week, the liberal actor testified before Congress on the war-torn nation of Congo, and the folks at ABC couldn’t have been happier to obtain an exclusive interview with him.

Host George Stephanopoulos cheered how “Ben Affleck scored some bipartisan praise on Capitol Hill this week...The Oscar winner’s traveled there nine times for his Eastern Congo initiative. And as he told Martha Raddatz, that mission has changed his life.”

Ben Affleck on Republican Actors: 'I Probably Wouldn’t Like This Person If I Met Him'

Just how much do many Hollywood liberals hate conservatives?

In an interview with Playboy, Ben Affleck said, "When I watch a guy [on film] I know is a big Republican, part of me thinks, I probably wouldn’t like this person if I met him":

Iran's UN Ambassador: Clooney Should Be Ashamed For Producing 'Argo'

Iran's ambassador to the United Nations had some harsh words for George Clooney and Ben Affleck this weekend.

In a taped interview that aired on CNN's Fareed Zakaria GPS Sunday, Mohammad Khazaee called "Argo" weak saying, "The producer of the film that is known as ambassador of peace, as I heard, should be ashamed...I would like to invite the producer and the director of the film to travel to Iran, and when they travel to Iran, the day after they will apologize from the big nation of Iran for producing such a weak film" (video follows with transcript and commentary):

CBS Gushes Over 'Very Serious' Ben Affleck's Political Potential: 'He Sure Does Sound Like a Politician'

Norah O'Donnell helped Bob Schieffer hype his upcoming segment with actor/director Ben Affleck on Thursday's CBS This Morning. O'Donnell played a clip of the soon-to-be aired interview and remarked, "He sure does sound like a politician. He won't give you a straight answer!"

Schieffer ballyhooed Affleck's supposed credentials to be a possible replacement for Senator John Kerry, who could be named the next Secretary of State [audio available here; video below the jump]:

Coulter Smacks Down Affleck and Maher: 'This Is Getting More Boring Than Charlie Rose'

Smacking them down was conservative author Ann Coulter who deliciously said, "This is getting more boring than Charlie Rose (video follows with transcribed highlights and commentary):

On Tuesday's Morning Edition, actor Ben Affleck was selling his new movie about corporate layoffs, Company Men, and anchorman Steve Inskeep carefully led the left-wing actor onto a soapbox to lecture about the immorality of American capitalism and financiers who do nothing but "move money back and forth":

INSKEEP: There's a line in Company Men that's staying with me. Tommy Lee Jones is at a corporate conference table. Someone else at the conference table is discussing their plans to lay off a bunch of workers. And nearly all the workers being laid off are older, which could be construed as being wrong or illegal. Someone at the table says: "Oh, no. This is going to pass legal scrutiny." And Jones responds: "I always thought we aimed for a little higher standard than that."

AFFLECK: That speaks so perfectly to people's feelings about our country. It's like it's just about getting by, or people can like let people go if they can get away with it, that there's no deeper sense of right or wrong. The banks shouldn't -- people shouldn't make such a giant profit off just moving money back and forth. And CEOs' pay shouldn't be 200 times the average worker. It used to be nine times.

NPR didn't have the contrarian populist toughness to ask about whether that sentiment about overpayment counts for movie stars that make $250,000 for simply showing up at a casino grand opening.

While on a much-needed vacation, things for Keith Olbermann have gone from bad to worse.

On top of that, the Daily Caller has published e-mail messages of liberal JournoList members expressing their disgust for the "Countdown" host.

As lefties hating on Olbermann is guaranteed to brighten a conservative's day, let's start there:

Olbermann Apologizes to Stewart: 'I Have Been a Little Over the Top Lately' 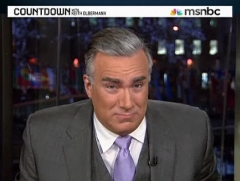 I guess it takes a liberal comedian to bring a liberal buffoon to his senses, for a day after Comedy Central's Jon Stewart scolded Keith Olbermann for his disgraceful rants against Senator-elect Scott Brown, the "Countdown" host apologized.

After showing the full clip of Stewart's fabulous smackdown on the previous night's "Daily Show," the MSNBCer said Friday:

"You're right. I have been a little over the top lately. Point taken. Sorry."

Unfortunately, the apology was to Stewart, not to the object of Olbermann's repeated attacks (video below the fold with partial transcript):

Frankly, it was shocking to see an NBC program so aggressively attack a fellow employee, and to watch the excessively liberal actor Ben Affleck, playing the part of Olbermann, participate in the skit.

This must-see video is embedded below the fold with a rough transcript: