Over the course of about 28 minutes of airtime (including commercials) following the President’s Fourth of July event A Salute to America, CNN’s The Situation Room put on one of the most disgraceful displays of liberal media bias, Trump hatred, and slights at America you’ll ever see. Attacking the President like bitter preschoolers, a cast of CNN personalities bashed the Trump speech as a “rudimentary” “eighth grade history” report ripping off of Schoolhouse Rock and Wikipedia to create a work of “jingoism and militaristic virtue.”

Thursday’s Inside Politics led off with more kvetching about every aspect of President Donald Trump’s surprise visit to U.S. troops in Germany and Iraq, including how he didn’t meet with the Iraqi Prime Minister. Conveniently, they downplayed the positive symbolism of having a president visit troops and footnoted the similarities between Trump and Barack Obama in not meeting face-to-face with Iraqi leaders.

VIDEO CNN Decries U.S. Troops in Iraq Who Had Their MAGA Hats Signed by Trump

During President Trump’s surprise visit to Al Asad Airbase in Iraq to celebrate Christmas with the U.S. troops there, he rubbed shoulders with America’s finest as he took selfies and signed autographs for them. Some of those autographs were signed on the iconic “Make America Great Again” hats that some soldiers brought to him. For any other president it would be treated a fun and warm moment, but not for this one and not if CNN had anything to say about it.

CNN has blurred any distinction between reporting and editorializing not only on television, but also on their own website. On Thursday, CNN Pentagon correspondent Barbara Starr raged against President Trump just like every other correspondent and host on CNN....this time in a commentary on CNN's online opinion page.

Jack Heretik at the Washington Free Beacon reports that CNN is so desperate to push for gun control in every forum that on Thursday, Pentagon correspondent Barbara Starr pestered Defense Department spokemsan Dana White about how it must be fairly close to impossible for the military brass to "stay out of the gun debate" in America. White said no, it wasn't impossible, that those issues "are for political leaders."

A CNN panel was visibly disgusted Tuesday evening when news broke out of the Pentagon that President Trump had requested to have a military parade in Washington, DC similar to the Bastille Day parade he witnessed while in Paris, France. The panel was outraged as they tossed around denouncements and comparisons to the despots like those in North Korea and Russia.

Terrifying news broke during CNN’s The Lead on Wednesday, as details of a chemical weapon attack against US troops at Qayyara Air Base in Iraq became known. “We do have some breaking news coming into CNN at this minute,” announced a concerned Jake Tapper, “US officials are telling CNN that the Pentagon suspects ISIS launched a chemical weapons attack against US and Iraqi troops.” The terrible development seemed to go unnoticed by ABC, CBS, and NBC because none of them reported it during their evening broadcasts.

Make no mistake, the journalists at MSNBC and CNN loved Barack Obama’s defense of not using the phrase “radical Islamic terrorism.” Regarding the Tuesday speech, which also denounced Donald Trump, Andrea Mitchell was beside herself: “This was a passionate cry from the heart about his vision of America by this President. He has never before taken on Donald Trump and he just eviscerated Donald Trump in that extraordinary speech.”

On Thursday night, the major broadcast networks declined to cover reports that one of the five Taliban detainees swapped for Army Sgt. Bowe Bergdahl in May 2014 has been seeking to rejoin the terrorism ranks by contacting Taliban members back in Afghanistan.

The news, which was broken by CNN Thursday afternoon, came following reports on Wednesday from Fox News and NBC News that the Army could be pressing desertion charges against Bergdahl for leaving his post prior to his capture in 2009. Since those stories arose, the Pentagon has denied those allegations.

Jon Stewart: Media 'Kind of Suck' for Getting Scooped by Rolling Stone 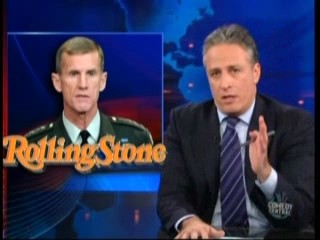 Comedian Jon Stewart Wednesday pointed out an inconvenient truth about this week's General Stanley McChrystal incident: the media "kind of suck" for getting scooped by Rolling Stone magazine.

As "The Daily Show" host addressed the day's events involving the General and President Obama, he showed clips of various press members expressing disgust that Rolling Stone would get such access to McChrystal and staff.

After the final clip of CNN Pentagon correspondent Barbara Starr asking, "What on earth was he thinking giving an interview to Rolling Stone," Stewart quipped, "At approximately 11:04 Eastern Standard Time, the American news media finally realized they kind of suck" (video follows with more highlights and commentary):

By Colleen Raezler | February 3, 2010 11:08 AM EST
There are at least two sides to every argument, unless the issue is homosexuality. Then, according to CNN, there's only one side and it's the homosexual activists who get to tell it.

CNN advocated a repeal of "Don't Ask, Don't Tell" (DADT) policy in 12 different reports between Jan. 28, the day after President Barack Obama reiterated his pledge to end the current military policy of banning openly gay citizens from the United States military in his State of the Union address and Feb. 2.

CNN allowed spokespeople from gay advocacy organizations such as Servicemembers United, the Log Cabin Republicans and the Palm Center, as well as several former and active gay military personnel, to plead their case without challenge

CNN Puts Negative Spin on Withdrawal of Brigade from Iraq

Instead of the progress that has been made in lowering violence in the country, CNN decided to focus on the "significant price" of the troop surge in Iraq. Tuesday’s "American Morning" reported that the Defense Department had decided to pull an entire brigade out of Iraq. Co-host John Roberts asked Pentagon correspondent Barbara Starr "what’s this really mean for the war?" Starr only mentioned the decrease in violence in passing as she reported that the troop surge is "now officially in reverse gear." She did not include figures of this recent downturn in violence, something that only CBS Evening News did among the "Big Three" evening news broadcasts on Monday.

Starr’s report aired at the beginning of the 7 am Eastern hour of "American Morning." After she reported which units were sending troops home, Roberts asked her about the "price" of progress in Iraq. "Barbara, a lot of people are talking about progress here in Iraq, but progress comes at a price." In response, Starr highlighted the Bush administration’s lack of pressure on the Iraqi government to work on reconciliation, the shift to working with local groups that may become "armed militias" when the U.S. leaves Iraq, and how "ethnic cleansing" has divided Baghdad.